‘Prey’: How the SFX Team Ratcheted Up the Horror for the Redesigned Predator Alien

With the new “Predator” prequel, “Prey” (now streaming on Hulu), set in the Comanche nation in 1719, director Dan Trachtenberg wanted a more appropriate design for the iconic alien hunter. He’s leaner, more feral, and primitive-looking (played by Dane DiLiegro in a special effects costume). Yet he’s still as ferocious and badass as ever. Gone is the metallic mask/helmet and armor. They’ve been replaced by a skull mask and Dreadlocks, exposing the alien’s lower mandibles.

“Dan brought parameters of likes and dislikes, and initially one of the notes said that he wanted this [Predator] to elicit more horror,” said SFX supervisor Alec Gillis, who, with co-SFX supervisor Tom Woodruff, runs the acclaimed ADI special effects company that also works on the “Alien” and “Godzilla” franchises. “So that got us talking about whether or not this could have been the origins of demonic spirits in the eyes of the Native people, such as the Wendigo. That influenced our thinking.”

But not before they briefly experimented with a Neanderthal-style design, which proved too clunky and inelegant. So they pursued the current iteration. What concerned Trachtenberg the most about the original Predator design was that it wasn’t anatomically correct — it was too top heavy with such a large head. With these adjustments, though, they made the most proportionally balanced-looking creature. Still, it took a while to get right. The director wanted the thinnest possible Predator. “We were quick to see that wasn’t going to work after putting a guy in a leotard that had been printed with Predator flesh so it looked super skinny,” Woodruff said. 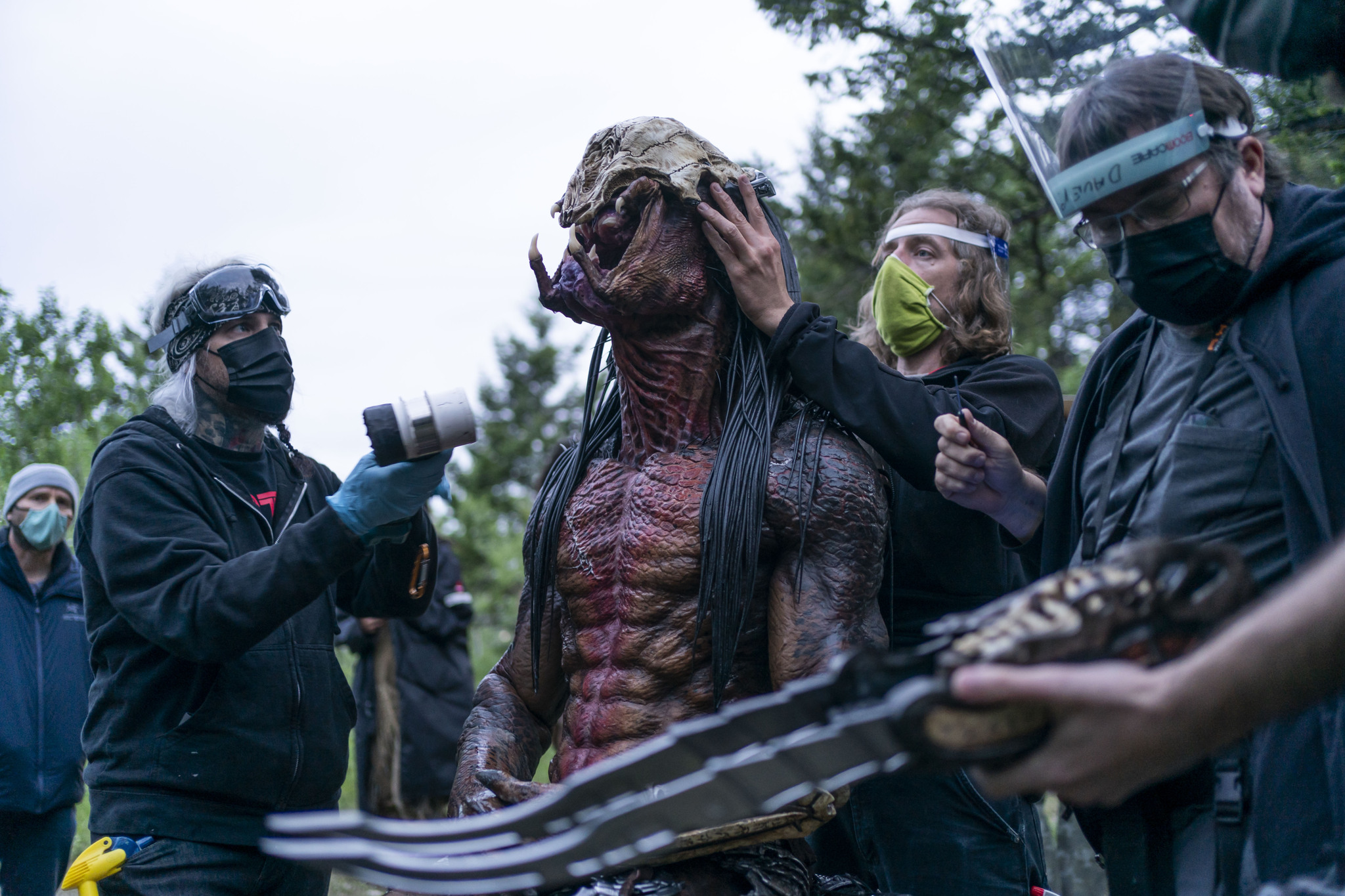 The skull mask served as the centerpiece: the trophy of a kill that the Predator proudly displayed, connecting it to the Indigenous prey as well as the French Canadian trappers that it hunts. “The idea was that he found some alien and he hollowed out his head, added the tech bits that control his laser sight and heat vision,” added Gillis.

There was also the desire to downgrade the Predator’s weaponry (especially the plasma caster mounted to his shoulder) because they were too advanced for the Comanche to go up against. “It wouldn’t be a fair fight,” Gillis continued. “He did have the flechettes: the little floating land mines, which were intended to be little shrapnel bursts and were a precursor to his nuclear bomb on the wrist.”

The design process became a great opportunity to bend the rules and make the Predator more of the elements, in which he plays a cat and mouse game with a young female Comanche hunter Naru (Amber Midthunder). The process of building the costume started with a clay sculpture over a body cast of the actor, followed by a negative mold of that. “That’s what we run the foam rubber into,” Gillis said, “and then we seam and patch and paint and then ultimately we end up with a tailored costume.” 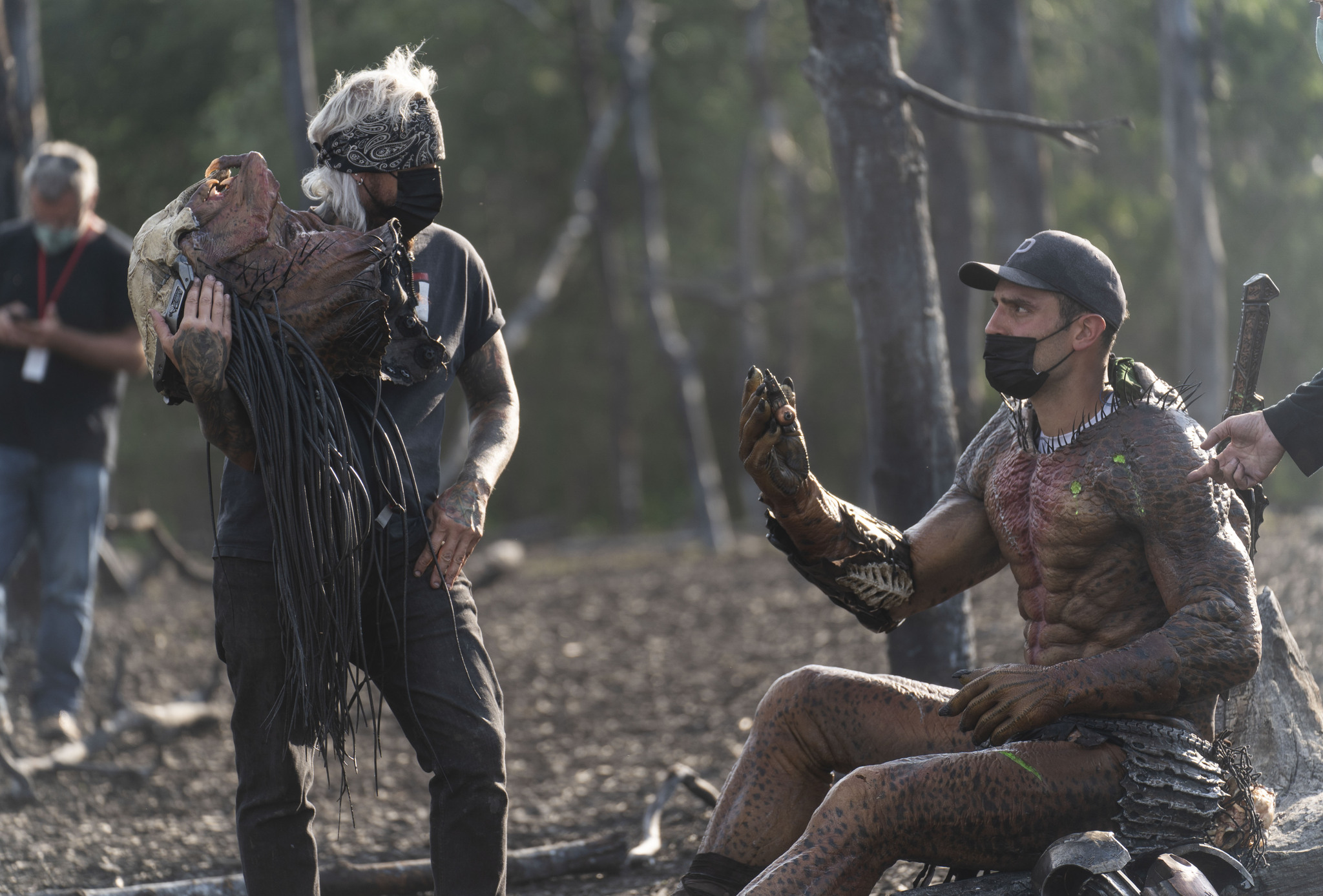 Additionally, there are the accoutrements: a loin cloth that was cast out of foam latex, some pouches, and a sculpted piece that looked like degraded metal that sat on the bottom of the ocean for a few hundred years. “And then he had his high-tech pieces, and one of the interesting design elements was that we wanted to keep to the time,” added Gillis. “When he’s messing with gear on his arm, you’ll see bone inlay. That’s a reflection of the trophies being embedded in the technology.”

Meanwhile, for DiLiegro (the basketball player-turned actor), playing this leaner and more dynamic Predator meant throwing the traditional head design away. “It moved my head into the neck of this character,” he told IndieWire, “essentially putting everything on top of my head. I was looking through two holes in the neck and my face was hidden, while still giving me the vision required to navigate the best I could during all the acting and stunt scenes. It was form and function working in synergy with this character.”

And what was it like for him going up against Naru, the underdog star of the movie? “He’s in it for the hunt, he’s in it for the competition,” DiLiegro added. “It’s no secret that he’s a giant, muscular, athletic, trained killer. But there’s a sense of hubris with him, lack of refinement. Maybe he’s younger —  I don’t know. It’s a game. It’s about outsmarting him.”