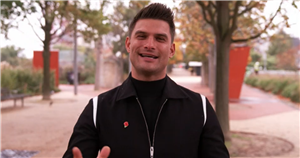 Strictly Come Dancing fans were left flustered after beloved professional dancer Aljaž Škorjanec returned to the BBC show just 12 months after he made his TV exit.

During Tuesday’s visit to the BBC studios, Ryan Clark welcomed viewers back to the show as he caught up with celebrity couples Molly Rainford and Carlos Gu and Hamza Hassin and Jowita Przystal on the show.

The TV presenter couldn’t help but quiz the stars on their upcoming routines ahead of Saturday night’s big performance as they explained how they had improved over the week.

But one celebrity fans didn’t expect to see returning to their screens once more was the Slovenian dancer with his pre-recorded Strictly segment discussing the best themed weeks performed on Strictly across the globe.

After interviewing Molly and Carlos, Rylan jokingly pulled out a handwritten letter from a "fan" of the show who asked BBC bosses to bring back the ballroom hunk to present a segment on the show.

It read: "Dear Rylan, I'd love to see the handsome and talented Aljaž on It Takes Two.

"Maybe you could have him explore some of the themed weeks from Strictly shows across the globe.

"It would really make my year as I love Aljaž so much – how lovely is that letter? – lots of love Janet Nanrara."

As the studio erupted into laughter, Rylan cheekily replied with: "Well Janet we can do that for you darling, here you go" while he pulled a funny face to the camera.

The 32-year-old pro dancer presented his first BBC segment since he left the beloved ballroom competition on the show which he titled, Around the World with Aljaž.

And it didn’t take long before fans flooded to Twitter to share their joy at his appearance on the show on social media as they begged the star to return to the show once more.

One user penned: “I miss seeing Aljaž trying to read the captions about him on #ittakestwo, bring him back just for that [prayer emoji].”

Another agreed: “Anyone else actually crying at @AljazSkorjanec being on #ItTakesTwo? Miss him and his funny face so much [crying emoji] #Strictly @bbcstrictly.”

A third chimed in with: “ALJAZ CONTENT! #itt #ItTakesTwo” with another adding: “Loved this interlude with Aljaz” More of this please #ittakestwo #Strictly.”