As Hurricane Fiona bore down on Puerto Rico this week, residents of the U.S. territory in the Caribbean didn’t have to look far for reminders of the last great storm to hit the area, exactly five years ago: Blue tarps are draped over thousands of homes, structures in need of repair still dot the island and power outages remain persistent.

The deadliest natural disaster in Puerto Rico in 100 years, Hurricane Maria killed roughly 3,000 people and destroyed the electrical system. Though Fiona made landfall Category 1 storm, the damage it wrought even before it struck – including the loss of power and potable water – served as a grim reminder of why, for many of the island’s residents, Maria marked a distinct before and after in their lives.

“The electricity grid is fundamental to the entire livelihood of everyone who lives here in Puerto Rico,” said Charlotte Gossett Navarro, chief director at Hispanic Federation Puerto Rico. “At its most extreme, we are putting people’s lives at risk.”

Fiona leaves a ‘nightmare’: The power is out. Homes and roads are flooded.

How can I help Puerto Rico recover from Hurricane Fiona?: Mutual aid, nonprofits to support

Grid a ‘poster child’ of decay of colonial system

The electric grid has long been fragile but the compounding crises driven by climate change, the pandemic and fiscal pressures have pushed it to the breaking point, said Cecilio Ortiz García, co-founder of the University of Puerto Rico’s National Institute of Energy and Island Sustainability.

“By design, Puerto Rico’s electric grid has been the place where U.S. mainland interests and local colonial elites have done their bidding,” he said. “The grid has become the poster child of the decay of the colonial system, its institutions and a very vulnerable population.”

For many Puerto Ricans, the blackout that accompanied Fiona brought back memories of the dark months after Hurricane Maria hit on Sept. 20, 2017 as a Category 4 storm. It took almost a year to completely restore power across the archipelago, and the blackout would become the largest in U.S. history and second-largest in the world, according to the Rhodium Group, a policy analysis firm.

Juan Cintrón, 62, said he lost power when Maria hit in September and he didn’t have electricity again until January. He lost power again on Sunday as Fiona was nearing Puerto Rico.

“The power went off and right now I have candles in the house,” said Cintrón, who lives in the central mountainous town of Ciales.

Before Fiona made landfall on Sunday, it provoked a general blackout affecting the entire U.S. territory of 3.2 million people. Power company LUMA Energy said it had restored power to 100,000 customers by Monday morning.

Grappling with an antiquated electric grid and saddled with $9 billion in debt, Puerto Rico’s troubled power company, the Puerto Rico Electric Power Authority (PREPA), effectively filed for bankruptcy in the summer of 2017. The $9 billion in debt was, at the time, larger than that of any other operational U.S. public corporation.

In the wake of Maria, PREPA signed a $300 million deal with Whitefish Energy Holdings, a small Montana-based contractor, to repair the power grid. The company, based in the hometown of former President Donald Trump’s interior secretary, had two employees the day the storm hit, The Washington Post reported. Following criticism from lawmakers and separate Congressional committee investigations, PREPA canceled the contract.

In 2020, PREPA turned toward privatization. The power authority signed a 15-year contract with LUMA Energy, a Canadian-American electricity consortium, to take over transmission and distribution operations. The company pledged to reduce power interruptions and the length of outages.

But rolling blackouts have persisted. Businesses have closed, and one of Puerto Rico’s largest hospitals was left without power last week when one of its generators failed in the middle of an outage, the Associated Press reported.

The frequent and widespread outages have resulted in an island-wide “humanitarian and economic crisis,” Agustín Carbó, the San Juan-based senior manager of energy transition at the Environmental Defense Fund, said in a statement earlier this year. 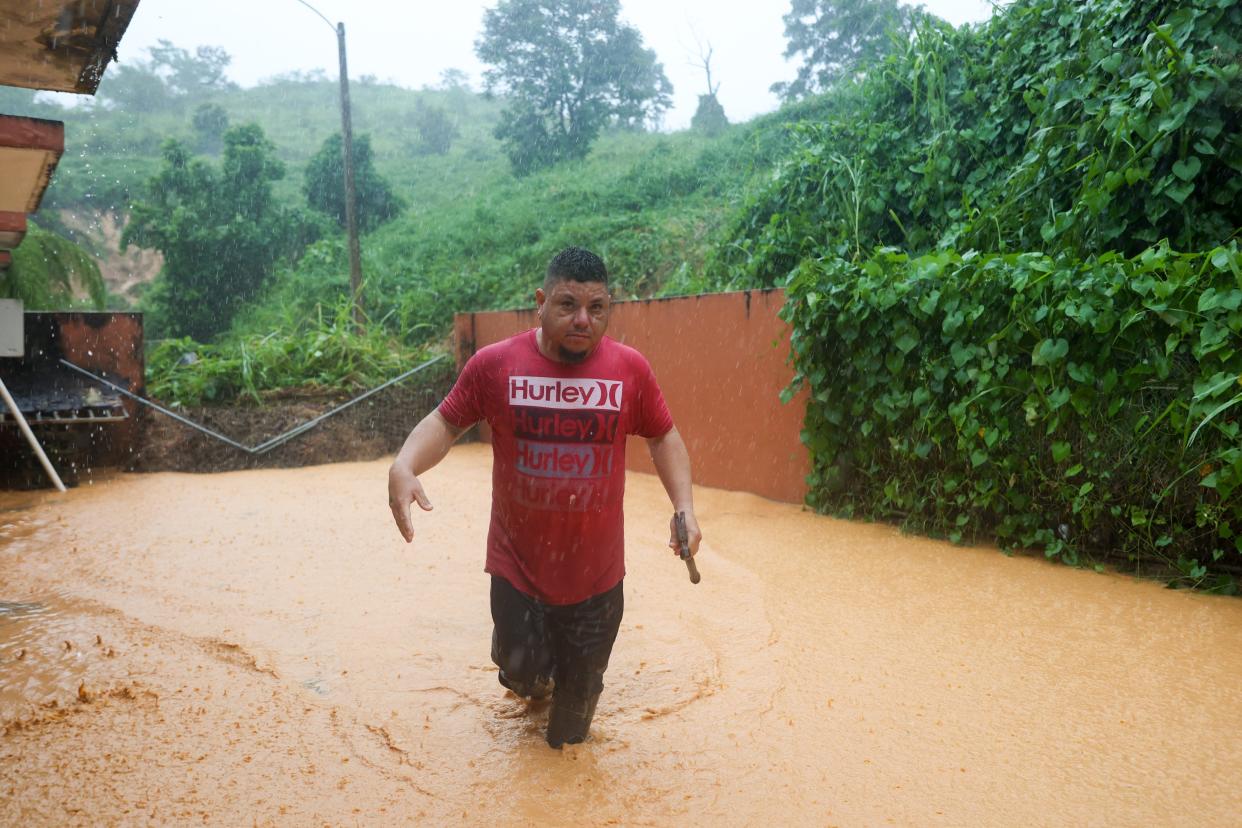 Work on the grid has been “slow and uneven” in the wake of Maria, leaving Puerto Ricans paying higher rates for electricity while experiencing inconsistent service and blackouts, he said at the time.

“It is unacceptable that five years after hurricane Maria nothing has fundamentally changed. The current energy crisis is dire, and Puerto Ricans and the island’s economy are suffering,” Carbó said.

Rapper Bad Bunny, 28, highlighted Puerto Rico’s energy crisis in a music video released Friday. The piece included videos of a hospital without power and news stories about LUMA Energy and the profits of its executives, alongside images of Puerto Ricans holding lanterns and marching in the street.

LUMA Energy and PREPA did not immediately respond to USA TODAY requests for comment Monday.

With no power, no water

With no electricity, there’s no power run filtration systems to produce potable water for Puerto Rican households, said Carl-Axel Soderberg, a member of the Puerto Rico Committee of Experts and Advisors on Climate Change.

On Monday, over 750,000 households woke up without potable water in Puerto Rico – about two thirds of the island – due to turbid water at filtration plants or lack of power, according to officials.

Puerto Rico’s Aqueduct and Sewer Authority (PRASA) gets its water from multiple sources through a complex system of rivers, canals and reservoirs on the island, but experts say much of it relies on LUMA and PREPA.

Although additional generators were bought after Maria to prevent water interruption, the agency reported many of these generators malfunctioned during the storm.

“How can that be?” said Soderberg, who is also the former director of the U.S Environmental Protection Agency’s Caribbean environmental protection division. “When you see that this thing is coming over, you double check that they are operational.”

He argued one of the biggest issues preventing PRASA from updating its infrastructure is delayed funding from FEMA. Although the agency allocated over $3 billion to PRASA, bureaucratic requirements have slowed urgent projects.

He said the island needs money to update filtration plants, to maintain canals that lose more than half their water supply through cracks and to buy more generators to keep filtration plants running when power goes out.

But there are projects technically outside of PRASA’s purview that would serve its interest.

The U.S Forest Service estimates over 144 million trees in Puerto Rico were destroyed in the aftermath of hurricanes Irma and Maria, leaving the island more vulnerable to flooding and mudslides during heavy rainfall.

Replanting those trees with the island’s department of natural resources should be one of PRASA’s top priorities to prevent heavy sedimentation that would overwhelm filtration plants, Soderberg argued.

PRASA has not responded to USA TODAY’s request for comment. 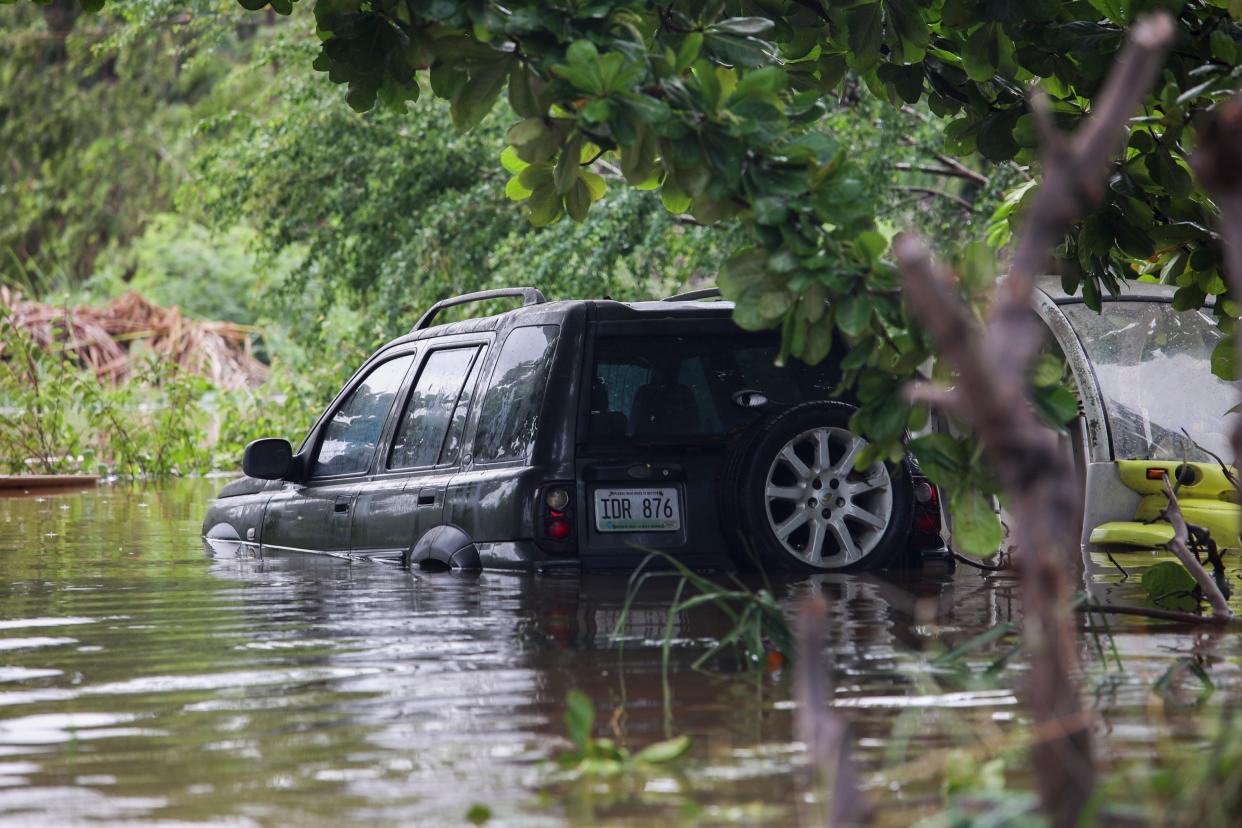 As Hurricane Fiona poured heavy rain over Puerto Rico on Sunday, video showed a bridge in Utuado, a central mountain town, being swept away in the muddy floodwaters.

The structure had been erected in the wake of Hurricane Maria as a temporary solution while a permanent bridge was built, said Eileen Vélez Vega, Puerto Rico’s transportation secretary. The new bridge was slated for 2024 and construction had not yet begun.

“I think that’s what is most impactful – a bridge that was made as a provisional solution, and five years later, we have not been able to build a new bridge,” said planner Luis García Pelatti. “What happened that this couldn’t get done?”

After Hurricane Maria, federal funds directed for Puerto Rico’s recovery were delayed amid political squabbles and when the Trump administration placed restrictions on billions of dollars of aid. But even as more funds have entered Puerto Rico, the government has been slow to rebuild.

The reconstruction projects “have been paused due to protocols, paperwork with the intention of extending the work for no apparent reason,” said Cristobal Jiménez, director of Corazón Latino, Puerto Rico.

“The urgency should be the community’s well-being,” he said.

As of August, the island’s government has spent about$5.3 billion, or 19%, of the $28 billion in funding that FEMA directed for post-Maria recovery projects, Chris Currie, a director in the Government Accountability Office’s homeland security and justice team said at a Congressional hearing this month.

And the government has completed only 21% of its official post-Maria reconstruction projects, while an estimated 3,600 families still live under blue tarps, according to local reports.

Currie noted in his testimony several challenges Puerto Rico faces in its recovery efforts, including “limited institutional knowledge for managing FEMA’s grant programs,” increases in project costs due to inflation and difficulties getting resources to start construction.

Anne Bink, FEMA Associate Administrator for Response and Recovery, said more than 700 staffers are still supporting the recovery from Maria, with more than 90% of them being survivors of that hurricane.

FEMA, Bink said, is involved with the government and LUMA in the project to make the power grid more resilient and is working with PRASA to restore safe drinking water while providing bottled water in the interim.

As Puerto Rico again faces the aftermath of a deadly storm, Gossett Navarro, of Hispanic Federation, said the island’s residents are enduring the consequences of its slow recovery.

“The fact that our energy system collapsed the way that it did is because we have not made enough advances in recovery,” Gossett Navarro said. “We are already on day three, day four (of the power outage as of Tuesday). Some people began losing power on Saturday. That’s loss of life.”