The past year has seen home cooks gripped by the latest trendy kitchen appliance – the air fryer.

And now a study reveals that the hype may be justified, showing the devices are cheaper and sometimes better at turning out tasty meals than a traditional oven.

There have been massive sales of the fryers, with shops often seeing shelves cleared, as households rush to combat rising energy bills.

Researchers from consumer champion Which? found that air fryers, microwaves, pressure cookers and slow cookers can all have cheaper running costs than normal ovens.

They pitted a range of kitchen appliances against each other to cook popular foods – from roast chicken to chips and steamed broccoli – calculating how long it took, how much energy it used and, crucially, how much it cost. 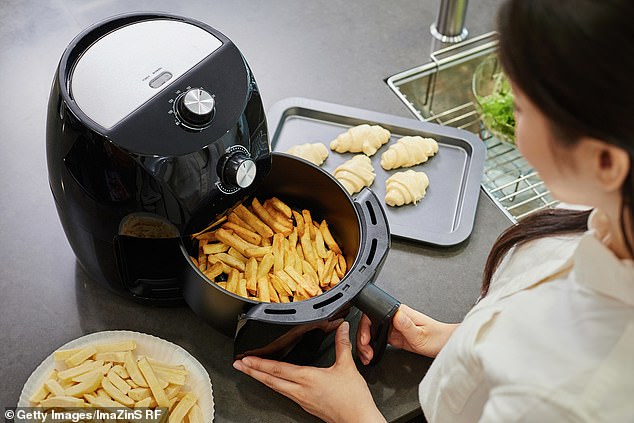 The traditional electric oven cost 39p to cook a delicious-looking roast chicken in 76 minutes, although testers noted that the meat was a little dry.

It was beaten by the air fryer, which cost 18p and cooked a perfect roast chicken, which had juicy, flavoursome meat and a crispy brown skin.

The cheapest and quickest method for cooking the chicken was with a pressure cooker – costing just 11p and taking 32 minutes. However, it did not give any crispy skin.

The cheapest appliance for cooking chips, and the quickest at 23 minutes, was the air fryer. It cost only 10p to cook two portions of chips, compared with almost three times that amount (29p) to cook the same quantity in the oven.

Surprisingly, the air fryer offered excellent results for baking a cake, in the cheapest way. It cost only 8p and took 33 minutes, with delicious results; a normal oven was three times as expensive at 24p, taking 56 minutes.

The cheapest appliances for making soup were the induction hob and pressure cooker – both cooked vegetable soup quickly and efficiently, costing just 9p.

Which? found that a microwave was the cheapest method for steaming vegetables – and was 3 to 4p cheaper than using an induction hob or pressure cooker. 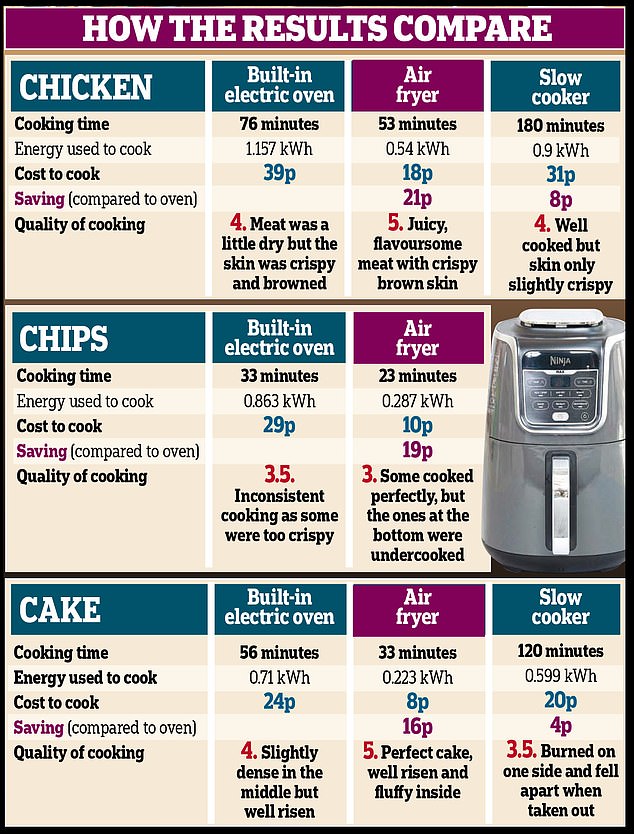 And now a study reveals that the hype may be justified, showing the devices are cheaper and sometimes better at turning out tasty meals than a traditional oven

The quickest and cheapest appliance for baking a large potato was easily the microwave – taking just eight minutes to cook a soft and fluffy jacket potato, and using just 5p worth of energy. The air fryer also proved its credentials, taking half the time of an oven and using only 9p worth of electricity.

While the air fryer generally came out well, Which? said people have to factor in the original purchase price, which can be anything from £30 to £300. The limited size means that it will, generally, cook small portions at a time, which can be an issue when making chips for a family meal or a cake.

Emily Seymour, energy editor at Which?, said: ‘Energy bills are a real concern for millions of households across the country and cooking is one of the everyday costs that really mount up over time.

‘There has been a surge of interest in air fryers and smaller cooking appliances in recent months, and our research shows that the hype could be justified in some cases, as we’ve found these products cost less to cook certain foods than conventional ovens.

‘The cost savings will soon be lost if you have to cook more than one batch though, so it’s still better to use your oven if you’re cooking large quantities. But for quick, small meals, we’ve found that it’s worth trying out the alternatives.’