Bells toll for Her Majesty: Parish churches, chapels and cathedrals mark their own tributes to the Queen as the national anthem is sung across the UK

Church bells rang out around the country this afternoon after the national anthem was spontaneously sung by Britons as the nation paid tribute to the Queen following her death yesterday.

Bells at churches including Westminster Abbey and St Paul’s Cathedral in London rang out at midday today, as thousands of other churches in the UK carried out the solemn tribute at the same time for up to an hour.

Moving photos also showed bells being rung at Edinburgh’s St Cuthbert Church, which stands near the city’s famous castle, and at Shrewsbury Abbey.

It came as the national anthem was sung today and last night at places including outside Buckingham Palace, and by fans inside Premier League side West Ham’s stadium ahead of their Europa Conference League match.

The emotional tribute was also sung by revellers in pubs around the country, with one video showing Manchester United fans singing it in the Bishop Blaize pub in the Stretford area of the city.

As King Charles greeted well-wishers outside Buckingham Palace this afternoon, some Britons also broke out into a rendition of God Save the King in a move that symbolised the start of his reign. 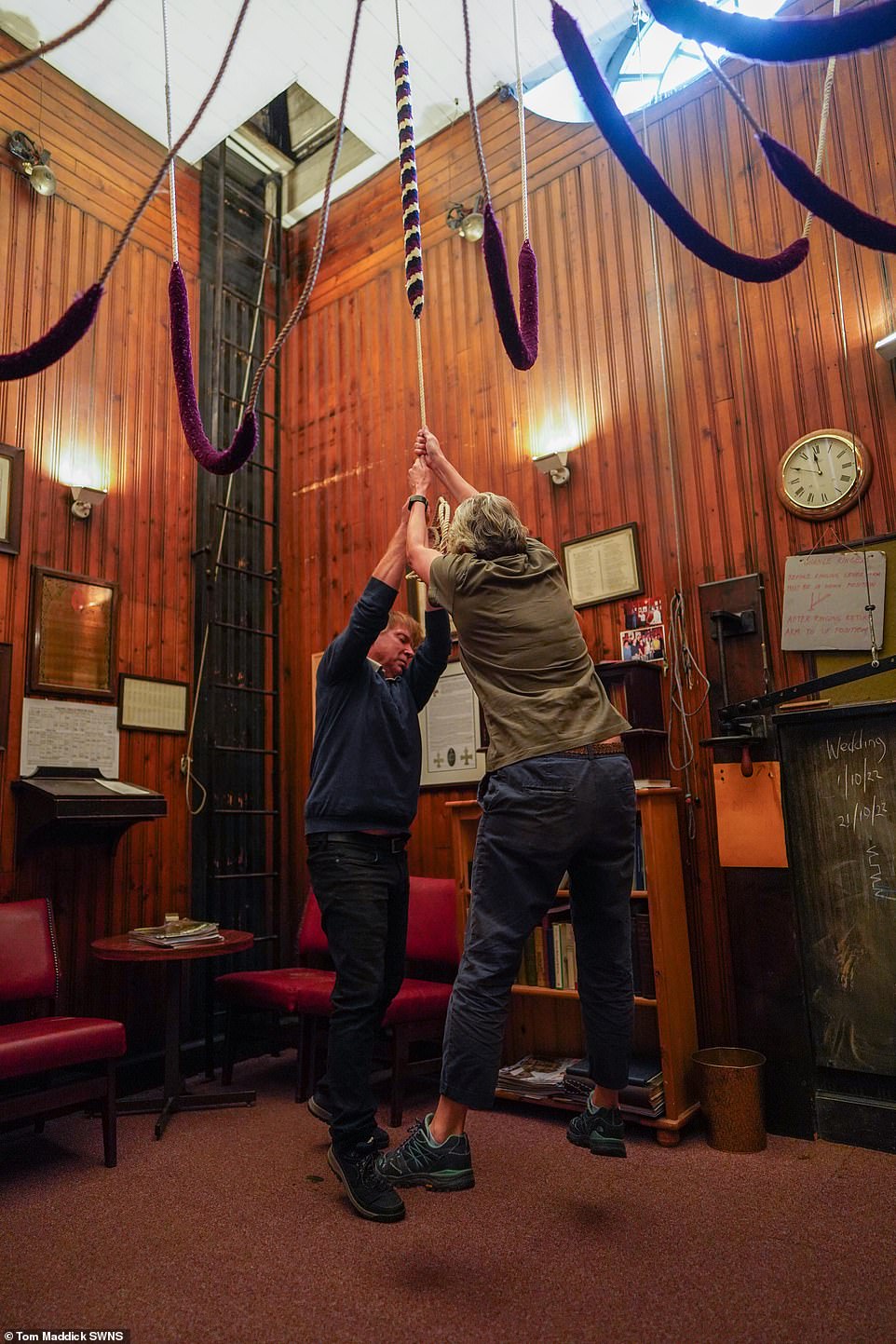 Church bells rang out around the country this afternoon after the national anthem was spontaneously sung by Britons as the nation paid tribute to the Queen following her death yesterday. Bells being rung at Edinburgh’s St Cuthbert Church 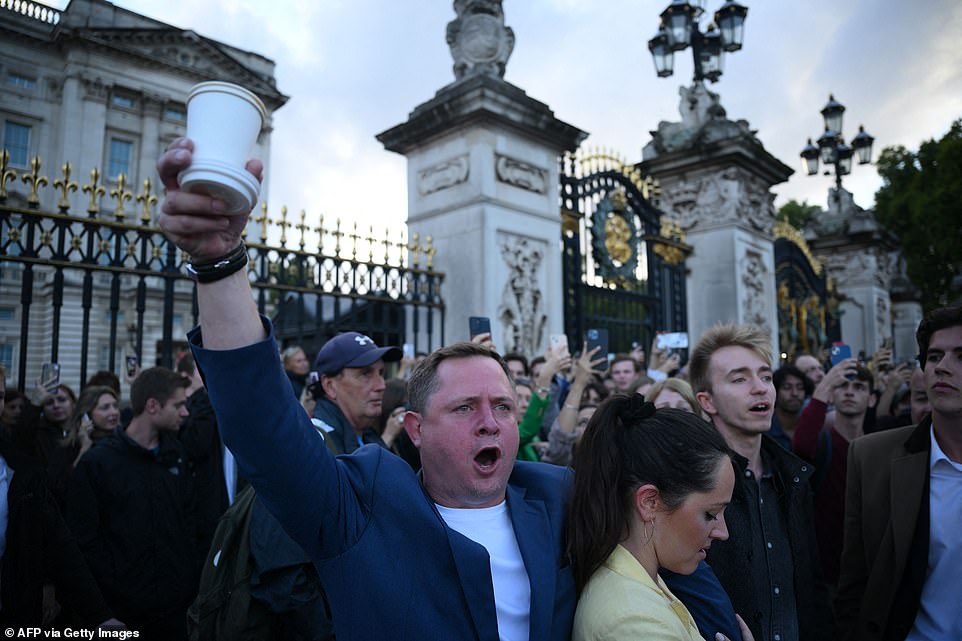 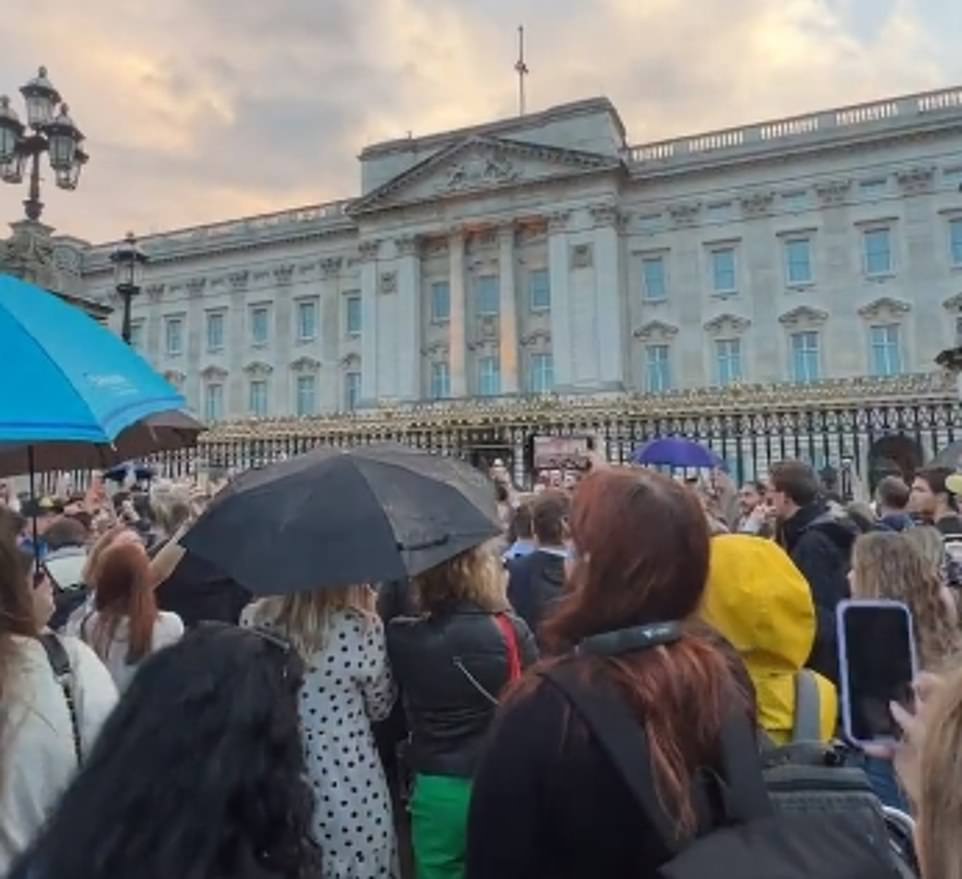 The national anthem was sung at Buckingham Palace after a rainbow appeared in the sky above, as similar scenes occurred at Windsor Castle

The Church of England sent out guidance to parish churches, chapels and cathedrals around the country last night, encouraging them to toll their bells or open for prayer following the announcement of the Queen’s death from Buckingham palace.

The bells at Westminster Abbey, St Paul’s and Windsor were rung with muffles to create a more solemn sound.

Glasgow, Leeds and Manchester Cathedrals also sounded their bells, along with Crathie Kirk, near the Balmoral estate in Scotland, where Her Majesty passed away.

Most of the country’s 16,000 churches have not rung bells with muffles since the death of the Queen’s father King George VI in 1952.

The details are contained in Operation London Bridge, the lengthy plan for the days following the Monarch’s passing.

The plan, named ‘Operation Muffle’, saw leatherworkers inundated with orders as churches rushed to ensure they were ready for the sad day, as many found their leather mufflers had rotten in recent years, or gone missing.

Full muffles are designed to dampen the sound of the bell and are reserved exclusively for the Monarch’s death.

Thankfully, the churches were given enough time to order new ones – and Britain’s leatherworking industry was inundated with orders.

Bells will also ring out for the hour immediately prior to the Queen’s state funeral, which is expected to be on September 19. 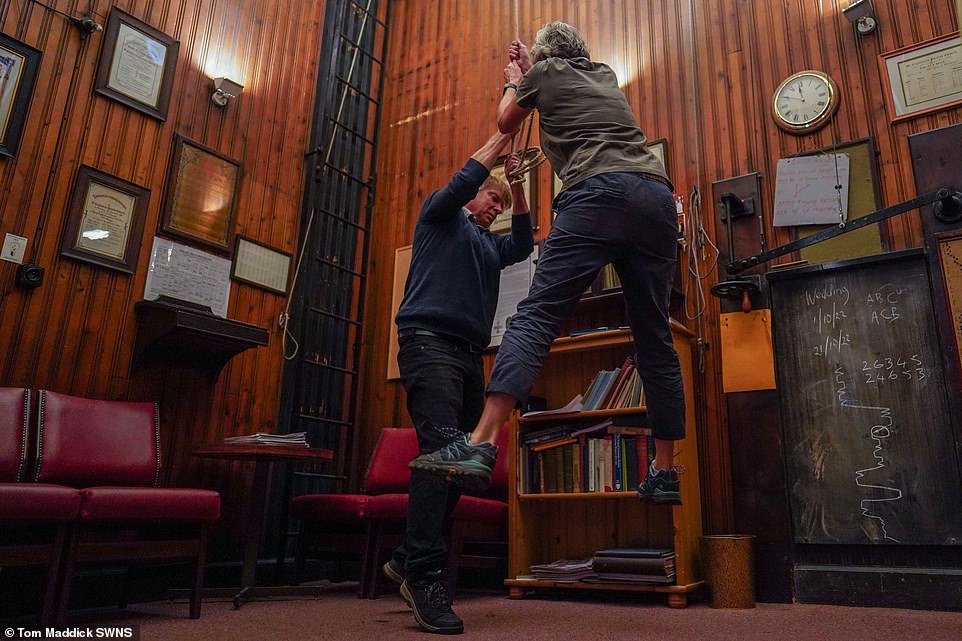 Bell ringers are seen hard at work at St Cuthbert Church in Edinburgh. The bells were rung for an hour, in line with the national guidance issued by the Central Council of Church Bell Ringers 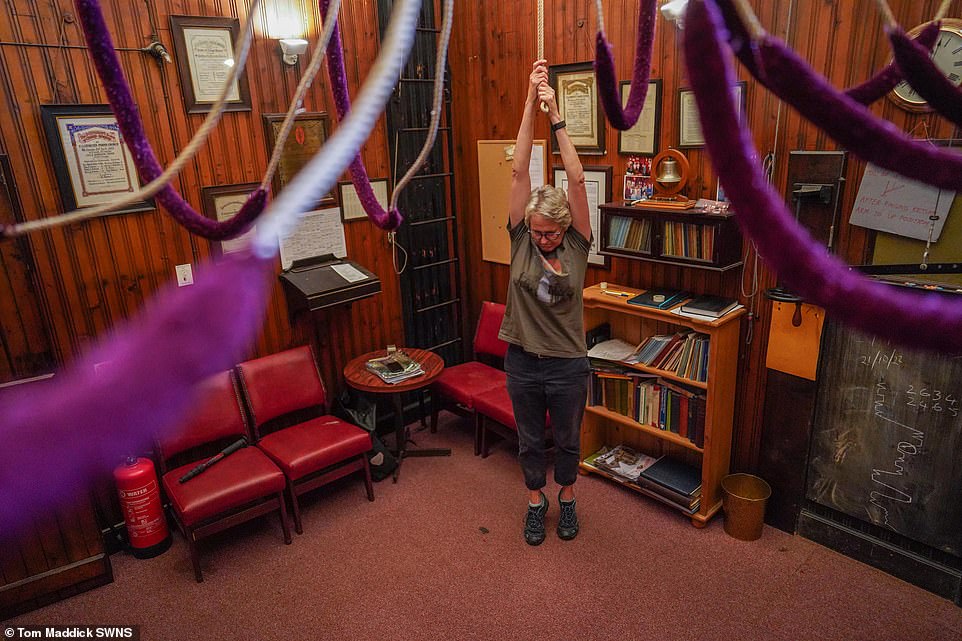 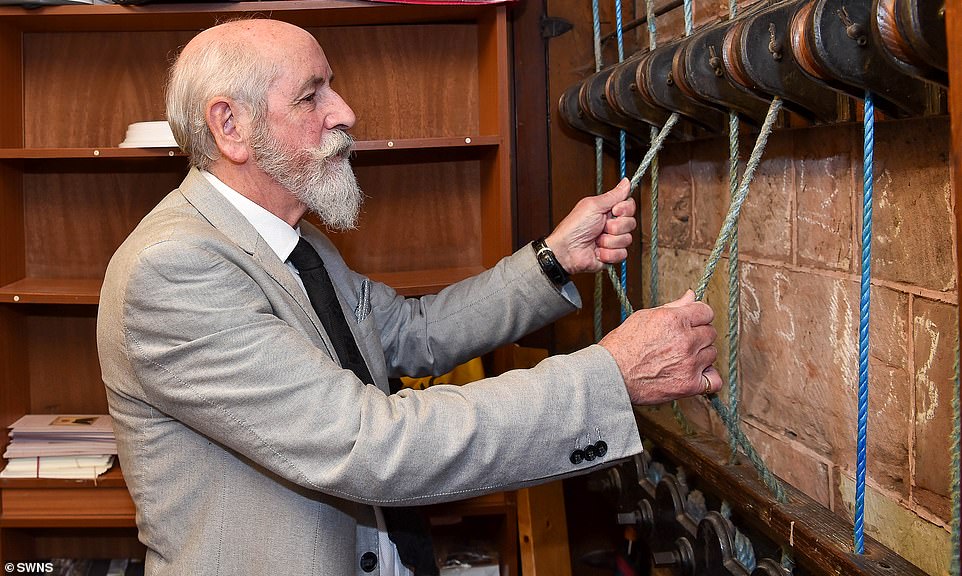 At Shrewsbury Abbey, 96 bells were rung at midday to mark the passing of the Queen. People also queued to sign the condolence book

There will be a 12-day mourning period for the Queen in the UK and the Prime Minister and senior ministers will attend a public service of remembrance at St Paul’s in central London today.

Flags are being flown at half-mast and books of condolence have been opened for people to pay their respects.

The national anthem was sung at Buckingham Palace after a rainbow appeared in the sky above, as similar scenes occurred at Windsor Castle.

One twitter user said: ‘The rainbow at Windsor Castle made me cry. the rainbow Queen sent us a sign.’

Another said: ‘A rainbow breaks out, as the Union Jack is lowered to half-mast at Windsor tonight. A remarkable image. Farewell, Ma’am.’

Others took it as a sign that the Queen has ‘really left us’ as the rainbows appeared shortly as the news of the monarch’s death was announced.