‘Go nuclear, go large’: Boris confirms £700m investment in Sizewell C as PM uses final major speech to insist it would be ‘madness’ not to push ahead with nuclear power after Putin’s invasion of Ukraine

Boris Johnson today urged his successor to ‘go nuclear, go large’ as he promised a £700million investment in the proposed Sizewell C power station in Suffolk.

In what is expected to have been his final major policy speech as Prime Minister, the outgoing premier said he was ‘absolutely confident it will get over the line’ in the next few weeks.

Mr Johnson warned it would be ‘absolute madness’ not to push ahead with the nuclear project as Russian President Vladimir Putin wreaks havoc with global oil and gas markets.

He also expressed his confidence that his successor – whether Liz Truss or Rishi Sunak – would abandon the ‘short-termism’ that has hampered previous Government thinking on Britain’s energy security. 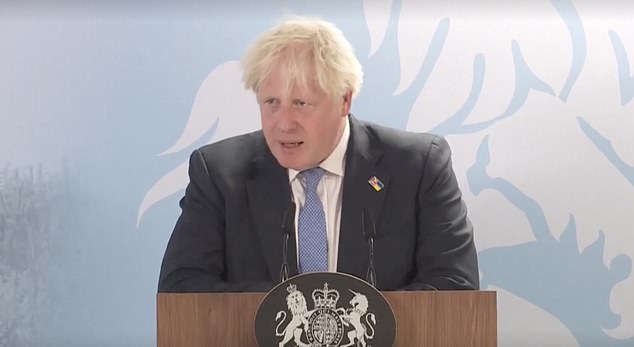 In a defence of his three years in power, Mr Johnson said: ‘This Government has not shirked the big decisions, we’ve raised our eyes, we’ve looked to the horizon.

‘Whoever follows me next week I know that they will do the same.

‘I say to you with the prophetic candour and clarity with one who is about to hand over the torch of office, I say: Go nuclear, go large and go with Sizewell C.’

With Britons facing soaring energy prices this winter – in a crisis made worse by Russia’s assault on Ukraine – Mr Johnson bemoaned how other nuclear projects had not already been delivered.

He insisted that if the much-delayed Hinkley Point C, currently being constructed in Somerset, had been ‘already running’ this year the it would be ‘cutting fuel bills by £3billion’.

‘That’s why we need to pull our national finger out and get on with Sizewell C,’ he added.

‘That’s why we’re putting £700 million into the deal, just part of the £1.7 billion of Government funding available for developing a large-scale nuclear project to final investment stage… in this Parliament.

‘And in the course of the next few weeks, I am absolutely confident that it will get over the line, and we will get it over the line because it would be absolute madness not to.’