British Airways have ended their two-week pause on the sale of short-haul flights from Heathrow today.

The suspension of sales on domestic or European tickets was implemented at the beginning of August to allow for existing customers to rebook their cancelled flights.

However British Airways has said that they may continue to  ‘take targeted action to limit the number of seats or fares available’ during this ‘challenging period’.

This comes as the airline was revealed to cancel the most flights out of all UK carriers, cutting nearly 30,000 flights from their summer schedule.

At the height of the chaos, British Airways cancelled 3.5% of their schedule compared to budget airline Ryanair which axed a mere 0.3%, according to data obtained by Sky News. 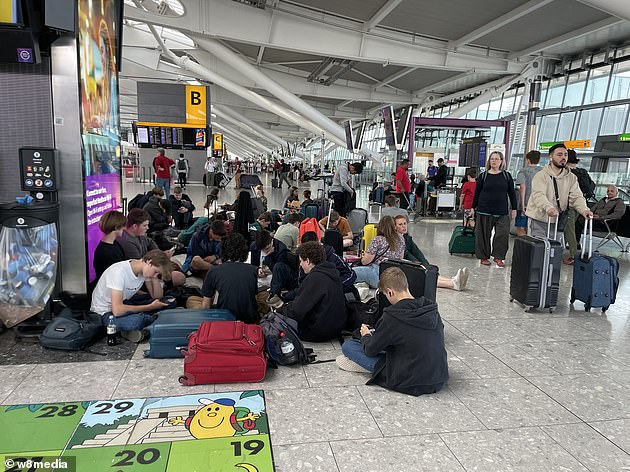 A group of travellers sit down in Terminal 5 while waiting for their flight. Thousands of passengers hav had their flights cancelled last-minute since spring 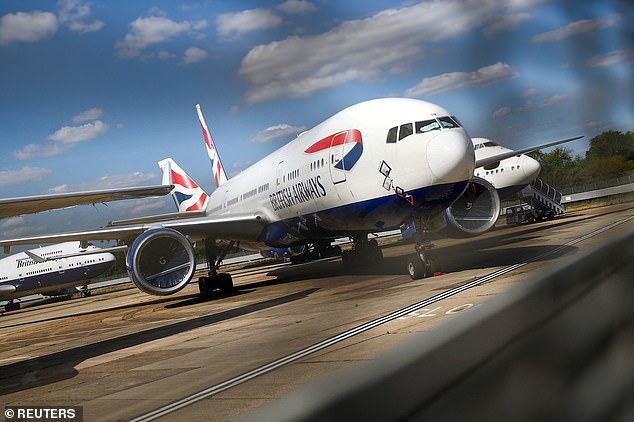 The airline has suffered from staff shortages and absences after cutting 10,000 jobs in 2020.

According to British Airways, pausing the sale for some flights allowed for existing customers to rebook their cancelled flights.

Bookings will still be impacted by Heathrow’s passenger cap of 100,000 flights per day until September 11.

The airport announced that it will extend its cap on passenger numbers for another six weeks as the aviation sector continues to struggle to cope with demand for travel.

It said the move was taken following an improvement in punctuality and fewer delays after introducing a temporary cap in July.

The capacity limit of 100,000 daily departing passengers was initially to last until September 11, but that date was pushed back on Monday. 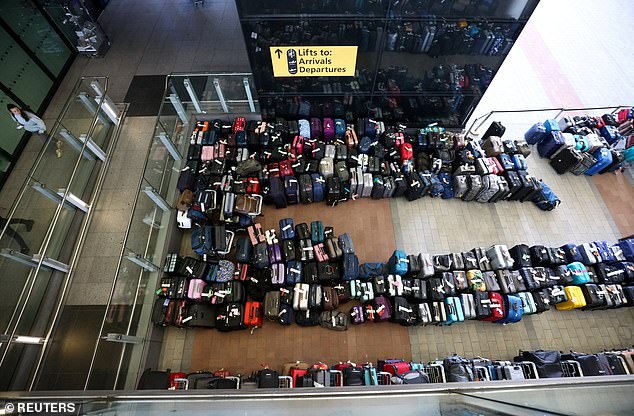 Hundreds of bags of luggage arranged outside Terminal 2 at Heathrow Airport. A shortage of baggage workers has seen huge delays in some people receiving their luggage

Heathrow said the cap imposed in July had resulted in ‘fewer last-minute cancellations’ and ‘shorter waits for bags’.

It added the capacity limits would be kept under review and ‘could be lifted earlier should there be a sustained picture of better resilience and a material increase in resourcing levels’.

Since May passengers at major airports, including Heathrow, Manchester and Gatwick, have experienced major disruption, with long queues at security and baggage reclaim, hour long delays and last-minute cancellations.

British Airways said: ‘We will continue to work with Heathrow to provide certainty for our existing customers while giving opportunities for new customers to travel with us this summer.’