British football clubs have been told they cannot play God Save The King before European matches this week – but some are planning to ignore the ruling.

A number of English and Scottish clubs are due to play in the European competitions over the coming days after Premier League fixtures were cancelled last weekend in the wake of the Queen’s death at Balmoral on Thursday.

Multiple pleas have been made to UEFA in recent days to allow the God Save the King anthem to be played at stadiums, but the governing body is understood to have batted away requests, MailPlus reports.

Chelsea and Rangers, both of which have strong links to the Royal Family, are said to be among the clubs that asked for permission ahead of their respective Champions League matches on Wednesday evening.

Chelsea’s mascots, the Chelsea Pensioners, are closely linked to the Royal Hospital in west London – founded by King Charled II in 1682.

Rangers, meanwhile, have long-established links and former manager Graeme Souness revealed this week that he had a portrait of the Queen placed in the home dressing room when he took the reins at Ibrox.

And the Scottish club are understood to be planning to defy the ban and will instead sing the national anthem following a period of silence tomorrow. 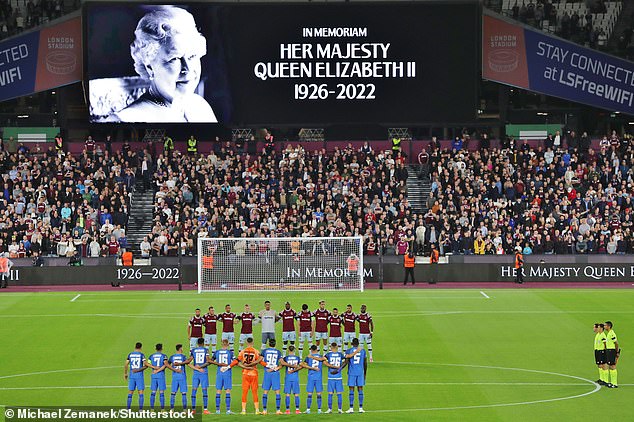 Other clubs may decide to follow suit, but they may face a potential fine by doing so.

UEFA has confirmed it has received multiple requests regarding the anthem, but said it wishes to ‘remain consistent across all UK venues’ and insists no anthems will be played other than the Champions League hymn.

It comes as English Football League clubs, who will also return to the pitch tonight, will play the national anthem ahead of their matches.

All football across the Football League and non-league system were cancelled across the UK this weekend.

Other sporting events, including England’s series-deciding third Test match against South Africa, went ahead as planned.

Players and supporters sang God Save the King prior to the start of the match, while also paying tribute to Queen Elizabeth.