Can it get any worse for the Victorian Liberals? Yes, it can

Startling revelations in The Age this week led to Liberal Party leader Matthew Guy and Mitch Catlin – his now former chief of staff – scoring the rare trifecta of being referred by Labor simultaneously to IBAC, the Ombudsman and the Victoria Police. Bingo.

Instead of preparing for a state election in just over 100 days, and impressing on the voters their readiness to govern, Liberals are scouring their own ranks for the source of a catastrophic leak while also fighting off an insurgency from religious extremists who threaten to convert the Liberal Party to the Illiberal Party. 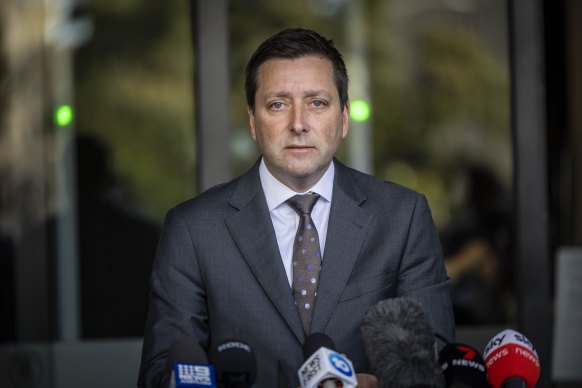 The evidence published on Tuesday revealed that Catlin sought to supplement his approximately $140,000 parliamentary salary with about $100,000 of secret contributions to his private business from a wealthy Liberal Party donor. No agreement was entered into by the Liberal Party or the donor.

By any measure, the Liberals’ slim prospects this November just slipped into freefall. Imagine the headlines – and the fallout – if an investigation develops in the middle of an election campaign.

Even if no specific crime is prosecuted, Catlin is guilty of a bold indiscretion and Guy of spectacularly poor ethical judgment for not shutting down this idea before it was in motion. The opposition leader has argued there is no problem because the proposed side-hustle never went ahead. Guy Fawkes would be pleased – he only plotted to blow up Britain’s parliament. 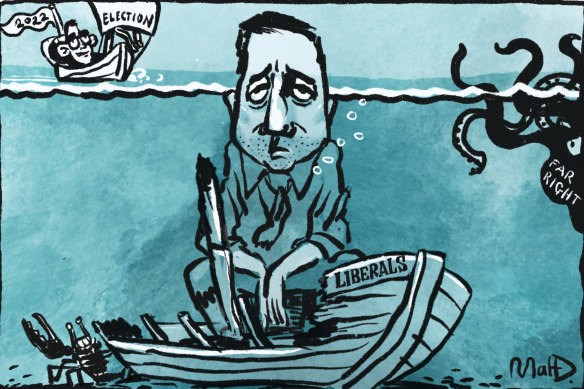 It is the voters who will establish if Guy is fit to become premier.Credit:Illustration: Matt Davidson

It reminds me of the federal parliament “bonk ban”. It ought not need to be written down that it is inappropriate to try to top up pay with secret side deals that may compromise independence in office. It is Ethics 101.

Since the Liberal Party has trouble recruiting private sector talent to work for public sector wages, they presumably now understand the need for higher pay for the public servants we all depend upon every day. The more conventional approach has been to defer rewards until leaving office with, for instance, a taxpayer-funded spot on the Administrative Appeals Tribunal as the return for services selflessly rendered.

Guy already had question marks against him over the “lobster” disclosures that sank his campaign in the last state election, and now more seaweed will stick. If there was a viable alternative, there would be moves to switch leaders. But who would want it now? Guy is the proverbial “dead man walking”, awaiting his fate after a seemingly inevitable drubbing come November.

The Liberals’ hunt for the saboteur is well under way. Unfortunately for Guy, the list of suspects is embarrassingly long. Only someone senior within the party would have the required access to internal emails, and tellingly many have sufficient motive.

Although it does not seem possible, the Liberals’ problems across the nation run deeper than a transient scandal about a now former chief of staff in one state.

In Western Australia, they are an endangered species. In South Australia, they just lost office. In NSW, the Liberal government is consumed by the ongoing investigation into why and how their leadership schemed to install ex-Nationals leader John Barilaro to a lucrative job in New York. Entitlement and privilege writ large.

Federally, Scott Morrison’s disastrous legacy is nought but a Liberal Party identity crisis. Will Dutton’s diminished delegates – Liberals now hold only four seats across metropolitan Melbourne – keep to the middle of the road or veer to the verge?

Some Liberals believe their once-dominant party must better reflect Christian right values, modelled by American evangelist politicians. They believe the future is to inhabit the space vacated by the collapse five years ago of the Family First experiment. Three recent preselections in Victoria are evidence they are winning the internal battle.

In the upper house South Eastern Metro seat, Ann-Marie Hermans will replace Gordon Rich-Phillips. Hermans was a Family First candidate in 2006 and hails from the Assembly of God. In Western Metro, Moira Deeming won the spot on the Liberal ticket to replace banished religious firebrand Bernie Finn, though she shares some of the same controversial views that led to Finn being expelled.

Most telling of all was the contest in the Eastern Victoria Regional seat. After a remarkably efficient recruitment drive, Gippsland chiropractor and “City Builders Church” figure Renee Heath won a tight contest against competent and sensible sitting Liberal moderate and lawyer Cathrine Burnett-Wake by a single vote.

Senior moderate Liberals concede the religious takeover they have been resisting for 10 years is succeeding. Some speculate on abandoning their party to the insurgents and starting again. Will the Liberal Party survive, or are we watching it collapse?

Labor Premier Daniel Andrews – himself under rightful scrutiny over his own party’s branch stacking, the partisan use of electoral staff and the politicisation of the public service – cannot believe his luck.