London: Prince William has told well-wishers that walking behind the late Queen’s coffin during a procession in London on Wednesday had brought back memories of his mother’s funeral.

The newly created Prince of Wales and wife, Catherine, the Princess of Wales, shook hands and spoke to mourners gathered at the family’s Norfolk estate, where about 100,000 people have left tributes at the gates to Sandringham House since news of the monarch’s death last week. 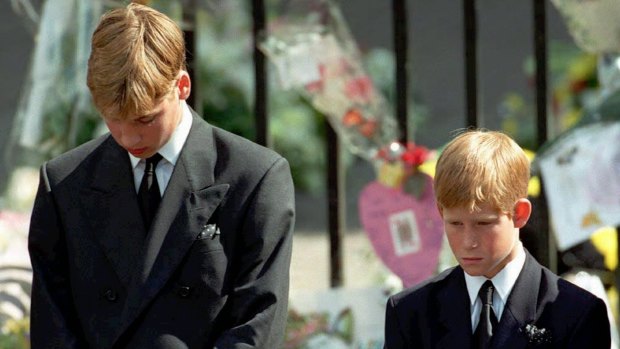 William, who famously walked behind his late mother Diana’s coffin in 1997 with his father King Charles III and brother Prince Harry, told a member of the public that this week’s procession was “challenging” and had “brought back a few memories”.

The future king added: “It’s one of these moments where you kinda think to yourself, ‘I’ve prepared myself for this, but I’m not that prepared’.

“It’s this weird kind of thing… because we knew she was 96.”

The Queen’s grandsons followed the same route down The Mall and Whitehall as children when they walked behind their mother’s coffin after she was killed in a car crash in Paris. On that day, William was just 15 years old and Harry 12. 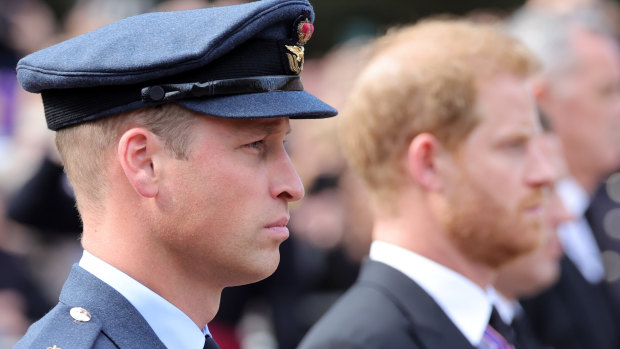 Prince William and Prince Harry walk behind the Queen’s coffin during a ceremonial procession in London this week. Credit:Getty

William has previously described the “very long, lonely walk” as “one of the hardest things I’ve ever done”, while Harry said later: “I don’t think any child should be asked to do that, under any circumstances.”

William and Catherine, both 40, stepped out of a dark Range Rover near the Norwich Gates and took time to read messages on the many tributes.

Sandringham House has been a royal residence for four generations of British monarchs over more than 150 years, and was traditionally where the Queen spent her Christmas break. 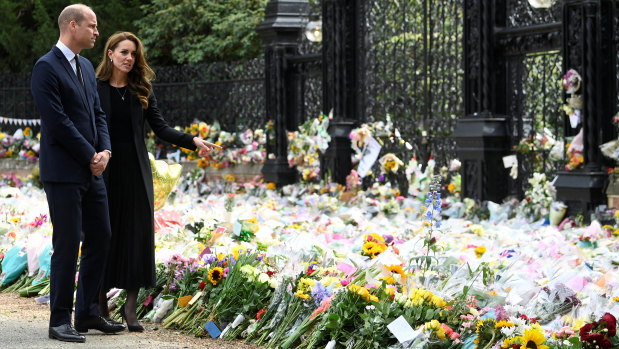 Prince William and Catherine, the Princess of Wales, inspect the flowers left at Sandringham.Credit:Getty

One of those in the crowd, Jane Wells, 54, from Lincolnshire, said: “I said how proud his mother would have been of him, and he said how hard it was yesterday because it brought back memories of his mother’s funeral.”

When crowd member told the emotional prince she was close to tears, he replied: “Don’t cry now – you’ll start me.”

William and Harry’s role in the Queen’s procession created fresh echoes of Diana’s funeral, but also reflected the efforts both men have made to show a publicly united front since their grandmother’s death.

On Saturday, the brothers and their wives thanked mourners outside Windsor in the first appearance of the royal couples together for more than two years after Harry and Meghan, the Duchess of Sussex, stunned their wider family – including the Queen – by resigning from their public duties and moving to the United States.

Catherine told mourners the royal family were “sticking together” and while nine-year-old Prince George “understands the loss” of his great-grandmother, his younger siblings, Princess Charlotte and Prince Louis, “less so”.