His complaint says the national news organization used its power and reach to defeat him politically.

And the court document claims that CNN has stepped up its attacks as Trump mulls whether to run for the presidency again in 2024.

Trump said he was proud to file a lawsuit standing up to the mainstream media.

‘In the coming weeks and months we will also be filing lawsuits against a large number of other fake news media companies for their lies, defamation, and wrongdoing, including as it pertains to “The Big Lie,” that they used so often in reference to their disinformation attack on presidential election of 2020,’ he said in an emailed statement.

It came after his lawyers filed a suit in Florida federal court.

‘Beyond simply highlighting any negative information about the plaintiff and ignoring all positive information about him, CNN has sought to use its massive influence— purportedly as a “trusted” news source—to defame the plaintiff in the minds of its viewers and readers for the purpose of defeating him politically, culminating in CNN claiming credit for “[getting] Trump out” in the 2020 presidential election,’ said the complaint written by Trump’s lawyers, and filed in federal court in Florida.

It accused the news channel of repeatedly defaming him, including comparisons with Hitler and calling him a ‘racist,’ ‘Russian lackey,’ and ‘insurrectionist.’

It highlights on-air segments and written pieces published on CNN.com discussing Trump’s rejection of the 2020 election result as ‘the big lie’ – a term coined in German by Hitler in his writings incited hatred against Jews. 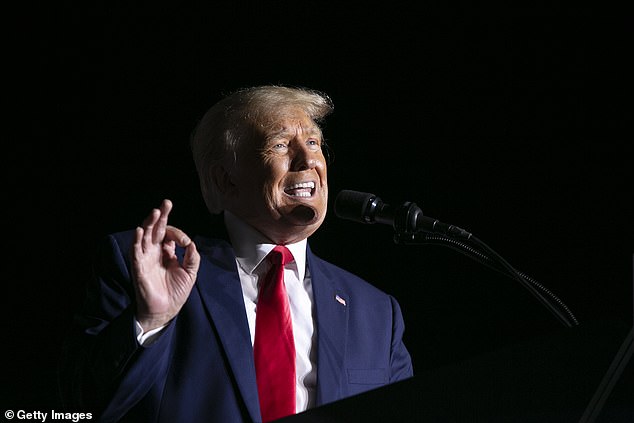 Former President Donald Trump filed a lawsuit on Monday accusing CNN of defamation, and seeking $475 million in punitive damages for comparing him with Hitler 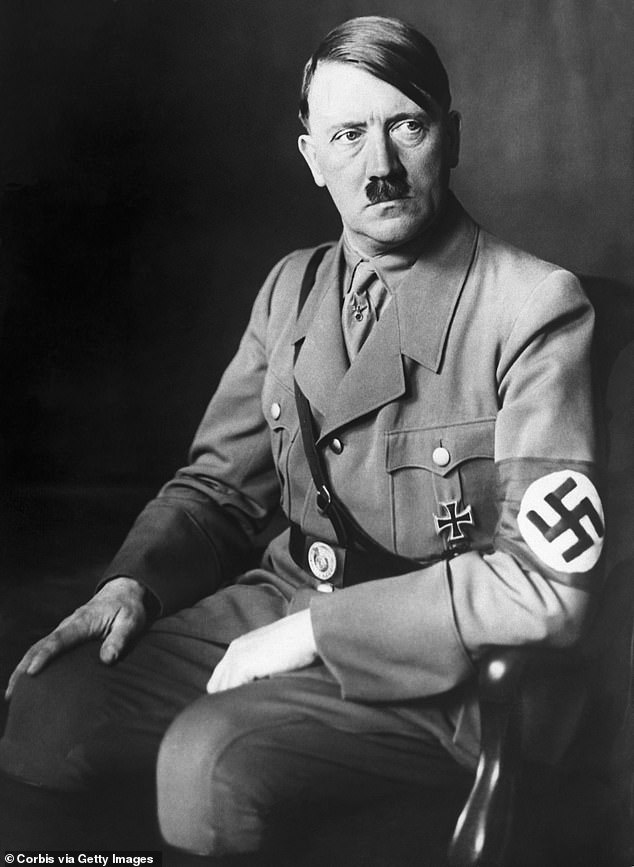 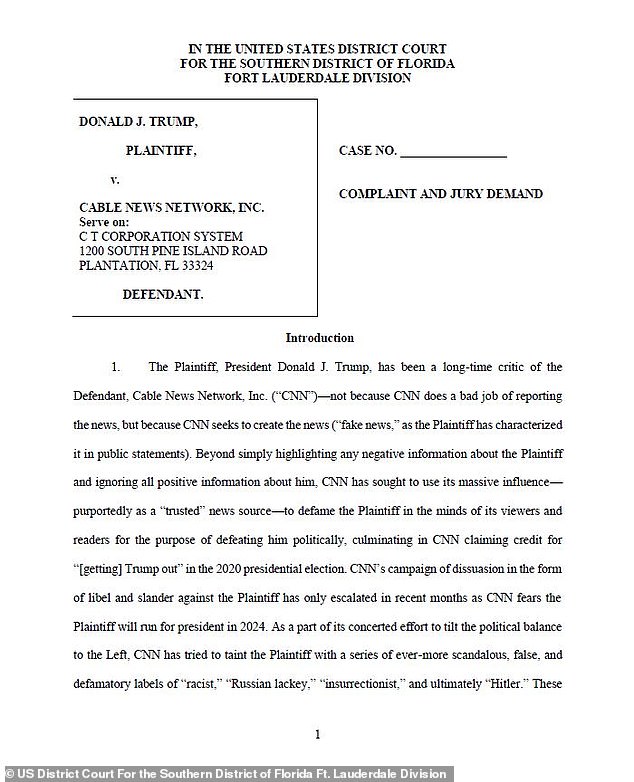 ‘CNN’s highly defamatory and persistent association of the plaintiff to Hitler and Hitler’s “Big Lie” is no mistaken misappropriation,’ reads the complaint.

‘It is wanton and malicious “reporting” intended to feed a narrative and to achieve a desired end: to cause readers and viewers to associate the plaintiff with the lowest of low, to fear him, to not vote for him, and to support campaigns against him.’

It marks the latest salvo in Trump’s long-running feud with CNN.

Although Trump has branded multiple outlets as ‘fake news,’ he has reserved particular fury for CNN since before even becoming president.

‘Your organization is terrible,’ he told Jim Acosta, CNN’s senior White House correspondent in January 2017, just before taking office. ‘You are fake news!’

Trump claims in the 29-page lawsuit that CNN has stepped up its attacks in recent months.

‘CNN’s campaign of dissuasion in the form of libel and slander against the plaintiff has only escalated in recent months as CNN fears the plaintiff will run for president in 2024,’ reads the complaint.

‘As a part of its concerted effort to tilt the political balance to the Left, CNN has tried to taint the Plaintiff with a series of ever-more scandalous, false, and defamatory labels of “racist,” “Russian lackey,” “insurrectionist,” and ultimately “Hitler.”‘

Trump has not yet announced a 2024 run, although he frequently teases the idea in interviews and in front of rally crowds.

His lawsuit is likely to face an uphill battle. Comparisons are generally viewed by courts as matters of opinion, rather than facts that can be defamatory.

Among the examples the complaint cites of comparisons with the Nazi leader is a special report in January 2022 that included footage of the German dictator.

It also references articles by Chris Cillizza, CNN editor-at-large. The complaint accuses him in on of likening Trump to Nazi propagandist Joseph Goebbels.

‘One can only hope that Trump was unaware that his quote was a near-replication of this infamous line from Nazi Joseph Goebbels: “If you tell a lie big enough and keep repeating it, people will eventually come to believe it,”‘ he writes.

Trump also said he was planning legal action against the House committee investigating the January 6 attack on the U.S. Capitol.

‘A lawsuit was filed today against CNN, the once prestigious news channel that has devolved into a purveyor of disinformation, defamation, and fake news, at a level which the American public, and indeed the world, will not even believe is possible,’ said Trump in his statement.

‘For years I have watched this take place, often in disbelief, but the time has finally come to hold CNN responsible and legally accountable for their willful deception and defamatory statements made about me and both, directly and indirectly, my strong, devoted, and patriotic supporters — people who love the United States of America, but have been treated very unfairly, at so many levels.’

The lawsuit comes as the former president faces a criminal investigation by the Justice Department for retaining government records at his Mar-a-Lago estate in Florida after leaving office in January 2021.