New York: The Safe Haven Baby Box at a firehouse in Carmel, Indiana, looked like a library book drop. It had been available for three years for anyone who wanted to surrender a baby anonymously.

No one had ever used it, though, until early April. When its alarm went off, Victor Andres, a firefighter, opened the box and found, to his disbelief, a newborn boy wrapped in towels. 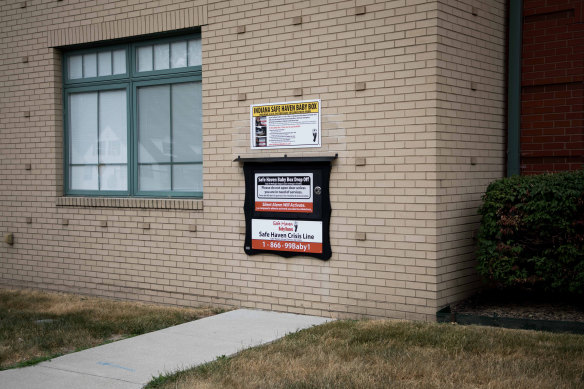 A drop-off box for parents to surrender their newborns at a fire station in Carmel, Indiana.Credit:Kaiti Sullivan/The New York Times

The discovery made the local TV news, which praised the courage of the mother, calling it “a time for celebration”. Later that month, Andres pulled another newborn, a girl, from the box. In May, a third baby appeared. By summer, three more infants were left at baby box locations throughout the state.

The baby boxes are part of the safe haven movement, which has long been closely tied to anti-abortion activism. Safe havens offer desperate mothers a way to surrender their newborns anonymously for adoption, and, advocates say, avoid hurting, abandoning or even killing them. The havens can be boxes, which allow parents to avoid speaking to anyone or even being seen when surrendering their babies. More traditionally, the havens are locations such as hospitals and fire stations, where staff members are trained to accept a face-to-face handoff from a parent in crisis.

All 50 states have safe haven laws meant to protect surrendering mothers from criminal charges. The first, known as the “Baby Moses” law, was passed in Texas in 1999 after a number of women abandoned infants in trash cans or dumpsters. But what began as a way to prevent the most extreme cases of child abuse has become a broader phenomenon, supported especially among the religious right, which heavily promotes adoption as an alternative to abortion.

Over the past five years, more than 12 states have passed laws allowing baby boxes or expanding safe haven options in other ways. And safe haven surrenders, experts in reproductive health and child welfare say, are likely to become more common after the Supreme Court’s decision to overturn Roe v. Wade. 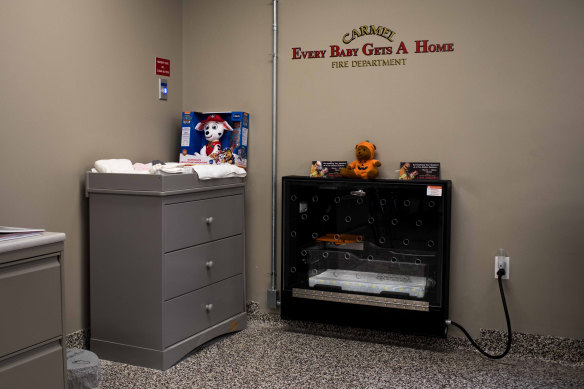 The Safe Haven drop-off box, as seen from inside the fire station, where a baby was left in April, the first in the three years since the box was installed, in Carmel.Credit:Kaiti Sullivan/The New York Times

During oral arguments in the case Dobbs v Jackson Women’s Health Organisation, Justice Amy Coney Barrett suggested that safe haven laws offered an alternative to abortion by allowing women to avoid “the burdens of parenting.” In the court’s decision, Justice Samuel Alito cited safe haven laws as a “modern development” that, in the majority’s view, obviated the need for abortion rights.

But for many experts in adoption and women’s health, safe havens are hardly a panacea.

To them, a safe haven surrender is a sign that a woman fell through the cracks of existing systems. They may have concealed their pregnancies and given birth without prenatal care, or they may suffer from domestic violence, drug addiction, homelessness or mental illness.

The adoptions themselves could also be problematic, with women potentially unaware that they are terminating parental rights, and children left with little information about their origins. 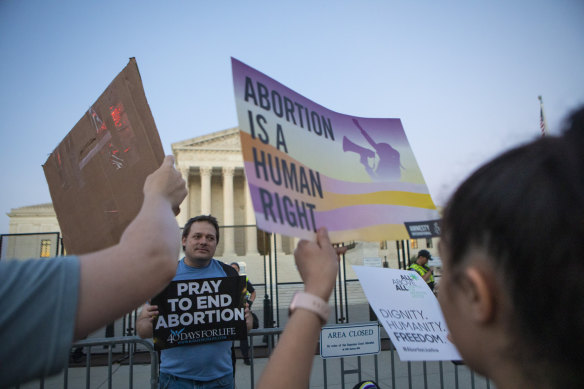 Demonstrators on both sides of the abortion issue outside the US Supreme Court after it struck down federal abortion rights protections.Credit:Anna Rose Layden/The New York Times

If a parent is using a safe haven, “there’s been a crisis, and the system has already in some way failed,” said Ryan Hanlon, president of the National Council for Adoption.

Safe haven surrenders are still rare. The National Safe Haven Alliance estimates that 115 legal surrenders took place in 2021. In recent years, there have been more than 100,000 domestic adoptions annually and more than 600,000 abortions. Studies show that the vast majority of women denied an abortion are uninterested in adoption and go on to raise their children.

But the safe haven movement has become much more prominent, in part because of a boost from a charismatic activist with roots in anti-abortion activism, Monica Kelsey, founder of Safe Haven Baby Boxes. 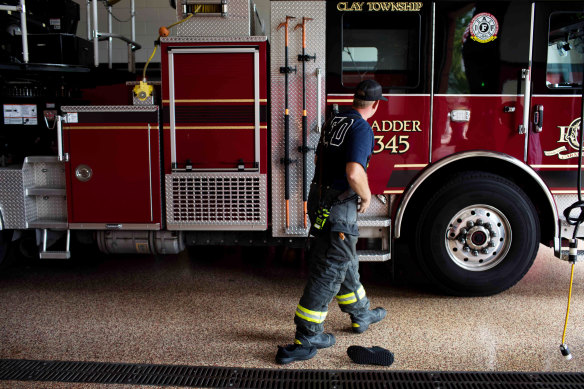 Firefighter Ben Krieg at the station where a baby was left in its Safe Haven drop-off box in April.Credit:Kaiti Sullivan/The New York Times

With Kelsey and allies lobbying across the country, states like Indiana, Iowa and Virginia have sought to make safe haven surrenders easier, faster and more anonymous — allowing older babies to be dropped off or allowing relinquishing parents to leave the scene without speaking to another adult or sharing any medical history.

Some who work with safe haven children are concerned about the baby boxes in particular. There are now more than 100 across the country.

“Is this infant being surrendered without coercion?” asked Micah Orliss, director of the Safe Surrender Clinic at Children’s Hospital Los Angeles. “Is this a parent who is in a bad spot and could benefit from some time and discussion in a warm handoff experience to make their decision?”

Kelsey is a former medic and firefighter, and an adoptee who said she was abandoned at birth by her teenage mother, who had been raped.

She first encountered a baby “safe” – a concept dating back to medieval Europe – on a 2013 trip to a church in Cape Town, South Africa, where she was on a pro-abstinence speaking tour.

She returned home to Indiana to found a nonprofit, Safe Haven Baby Boxes, and installed her first baby box in 2016.

To use one of Kelsey’s boxes, a parent pulls open a metal drawer to reveal a temperature-controlled hospital bassinet. Once the baby is inside and the drawer is closed, it locks automatically; the parent cannot reopen it. An alarm is triggered, and the facility’s staff members can access the bassinet. The box also sends out a 911 call. Twenty-one babies have been left in the boxes since 2017, and the average amount of time a child is inside the box is less than two minutes, Kelsey said.

She has raised money to put up dozens of billboards advertising the safe haven option. The advertisements feature a photo of a handsome firefighter cradling a newborn, and the Safe Haven Baby Box emergency hotline number. 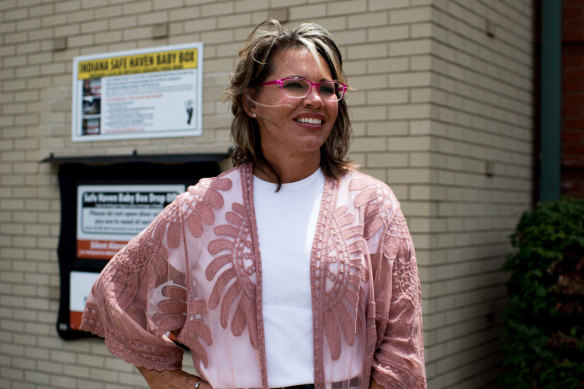 Kelsey said she was in contact with legislators across the country who wanted to bring the boxes to their regions, and she predicted that within five years, her boxes would be in all 50 states.

“We can all agree a baby should be placed in my box and not in a dumpster to die,” she said.

Because of the anonymity, there is limited information about the parents who use safe havens. But Orliss, of the Los Angeles safe haven clinic, performs psychological and developmental evaluations on some 15 such babies annually, often following them through their toddler years. His research found that more than half the children have health or developmental issues, often stemming from inadequate prenatal care. In California, unlike in Indiana, safe haven surrenders must be done face to face, and parents are given an optional questionnaire on medical history, which often reveals serious problems such as drug use.

Still, many children do well. Tessa Higgs, 37, a marketing manager in southern Indiana, adopted her 3-year-old daughter, Nola, after the girl was dropped off at a safe haven just hours after her birth. Higgs said the biological mother had called the Safe Haven Baby Box hotline after seeing one of the group’s billboards.

“From day one, she has been so healthy and happy and thriving and exceeding all developmental milestones,” Higgs said of Nola. “She’s perfect in our eyes.”

For some women seeking help, the first point of contact is the Safe Haven Baby Box emergency hotline.

That hotline and another maintained by the Safe Haven National Alliance tell callers where and how they can legally surrender children, along with information about the traditional adoption process.

Safe haven groups say they inform callers that anonymous surrenders are a last resort, and give out information on how to keep their babies, including ways to get diapers, rent money and temporary child care.

“When a woman is given options, she will choose what’s best for her,” Kelsey said. “And if that means that in her moment of crisis, she chooses a baby box, we should all support her in her decision.”

But Kelsey’s hotline does not talk about the legal time constraints for reunifying with the baby unless callers ask for it, she said.

In Indiana, which has the majority of baby boxes, state law does not specify a timeline for terminating birth parents’ rights after safe haven surrenders, or for adoption. But according to Don VanDerMoere, the prosecutor in Owen County, Indiana, who has experience with infant abandonment laws in the state, biological families are free to come forward until a court terminates parental rights, which can occur 45 to 60 days after an anonymous surrender.

Because these relinquishments are anonymous, they typically lead to closed adoptions. Birth parents are unable to select the parents, and adoptees are left with little to no information about their family of origin or medical history.

Hanlon, of the National Council for Adoption, pointed to research showing that over the long term, birth parents feel more satisfied about giving up their children if biological and adoptive families maintain a relationship.

And in safe haven cases, if a mother changes her mind, she must prove to the state that she is fit.

According to Kelsey, since her operation began, two women who said they had placed their infants in boxes have tried to reclaim custody of their children. Such cases can take months or even years to resolve.

Birth mothers are also not immune from legal jeopardy and may not be able to navigate the technicalities of each state’s safe haven law, said Lori Bruce, a medical ethicist at Yale.

While many states protect surrendering mothers from criminal prosecution if babies are healthy and unharmed, mothers in severe crisis – dealing with addiction or domestic abuse, for example – may not be protected if their newborns are in some way affected.

The idea of a traumatised, postpartum mother being able to “correctly Google the laws is slim,” Bruce said.

With the demise of Roe, “we know we are going to see more abandoned babies,” she added. “My concern is, that means more prosecutors are going to be able to prosecute women for having unsafely abandoned their children – or not following the letter of the law.”

On Friday, the Indiana governor signed legislation banning most abortions, with slim exceptions.

Higgs, the adoptive mother, has stayed in touch with Monica Kelsey of Safe Haven Baby Boxes. “The day that I found out about Roe v Wade, I texted Monica and was like, ‘Are you ready to get even busier?’”