Edinburgh formally apologises for its role in colonialism and slavery

The Lord Provost of Edinburgh has issued a formal apology to ‘all those who suffered profound physical and mental abuse from the City’s past involvement in colonialism and slavery’.

The civic apology comes after the Labour-run city council accepted all ten recommendations made by a report, chaired by Sir Geoff Palmer, into the city’s historic links with slavery and colonialism in response to the Black Lives Matter protests in 2020.

The first recommendation made by the review group was that the council publicly acknowledges the city’s past role in sustaining slavery and colonialism and issues an apology to those places and people who suffered.

Lord Provost Robert Aldridge opened a meeting of the City of Edinburgh Council this morning by saying: ‘The decision provides a welcome opportunity to reflect on the city’s role in the rise of colonialism and the part played by some of our forefathers in slavery and the economic benefits of it.

‘It is impossible to look out from this building across the city and not see how the landscape of the city was shaped by the wealth generated from colonialism and slavery. 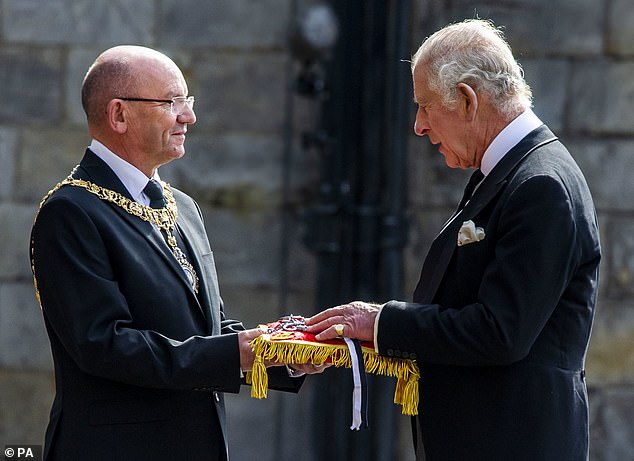 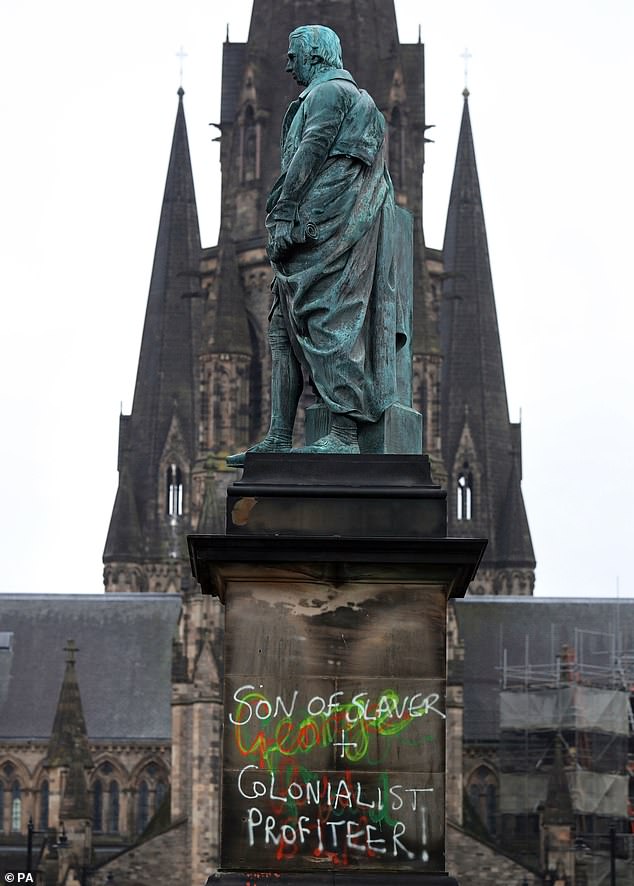 The apology comes after the city council accepted all ten recommendations made by a report into the city’s historic links with slavery and colonialism in response to the Black Lives Matter protests in 2020. Pictured: graffiti on a statue of Robert Viscount Melville in Edinburgh following the protests

‘The effects of colonialism and slavery are deeply embedded in the fabric of our city, in the buildings, in the institutions and even in the way that Edinburgh is laid out.

‘We cannot deny the benefits that the city has accrued over the years from the exploitation of others and in particular the continent and peoples of Africa.

‘Coming to terms with our past and recognising the detriment our ancestors have wrought through colonialism and slavery is very difficult for us all.

‘But try we must to reconcile our past with the generations of today in order that we can move forward, united in our common goals of equality, fraternity and liberty.

‘Through the establishment of the Edinburgh Slavery and Colonialism Legacy Review, led by Professor Geoff Palmer, Edinburgh is aiming to fill the gap in knowledge and understanding about the city’s past.

‘I wish to thank Geoff and his team most sincerely for producing a world leading piece of work on the subject which will help shape policy and engagement in our city for the foreseeable future.

‘It is appropriate to start this process with a formal apology.

‘So as Civic Leader of the city and Convener of the Council, I apologise to all those who suffered profound physical and mental abuse from the City’s past involvement in colonialism and slavery.’

Following the apology, the next action will be the creation of an independent Legacy Commission, supported by the council. 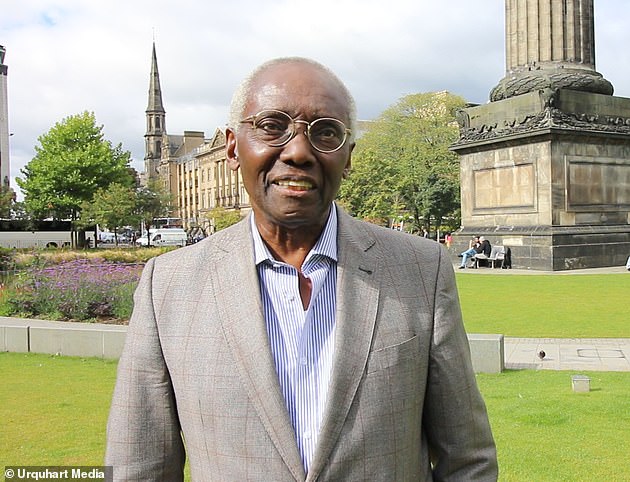 The first recommendation made by the Edinburgh Slavery and Colonialism Legacy Review group, led by Sir Geoff Palmer (pictured), was that the council publicly issues an apology to those places and people who suffered by slavery and colonialism 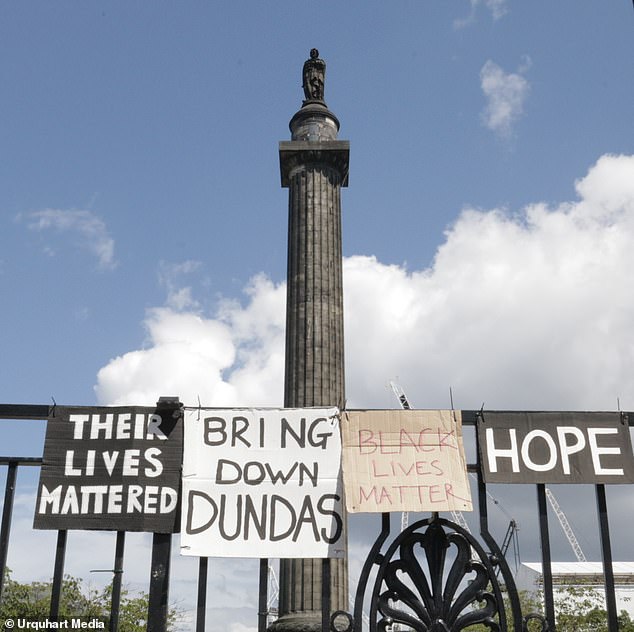 The Lord Provost said Edinburgh cannot deny the ‘benefits that the city has accrued over the years from the exploitation of others’. Pictured: The controversial Melville Monument erected in 1821 in memory of Conservative politician Dundas who delayed the abolition of the slave trade

He said: ‘Everybody has got to be included or it doesn’t make sense and that’s what we’re hoping for the curriculum development, is that it is our history.

‘That is how I think it should be taught and that’s how it will change attitudes because you cannot explain racism in any other way.

‘By talking about the impact of the delegation of black people and then justifying the enslavement, people will understand that.’

The report noted a number of prominent locations and buildings in Edinburgh with links to the slave trade, adding that 74 slave-owning New Town residents received compensation for the loss of their ‘property’ upon abolition in 1833.

One location highlighted in the report was the First Minister’s official residence in Charlotte Square, of which three historic owners ‘directly benefited from Atlantic slavery’.

India Street and Jamaica Street in Edinburgh’s New Town were also noted as a ‘celebration of the empire’, as well as St Andrew Square’s Melville Monument, dedicated to the Scottish politician Henry Dundas, who used his influence to delay the abolition of slave trade a further 15 years.

The monument was graffitied during Black Lives Matter protests with campaigners highlighting Dundas’ role in delaying the abolition of slavery in the 1800s.

It was re-dedicated by council officials to ‘more than half a million Africans whose enslavement was a consequence of Henry Dundas’s actions’ in July. 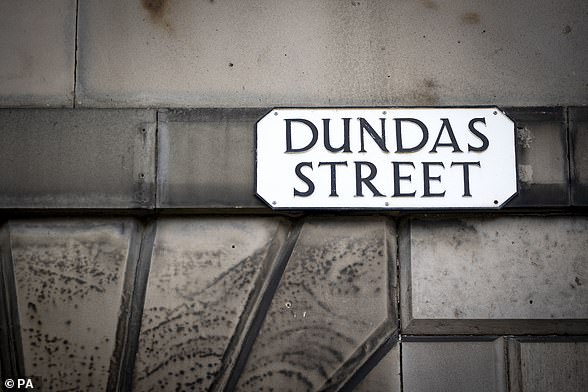 A petition has proposed to rename Dundas Street after Joseph Knight

Mr Knight was a Scottish-Jamaican slave who won a court case and then an appeal in 1778 to free himself, by proving that slavery didn’t exist in Scots Law. 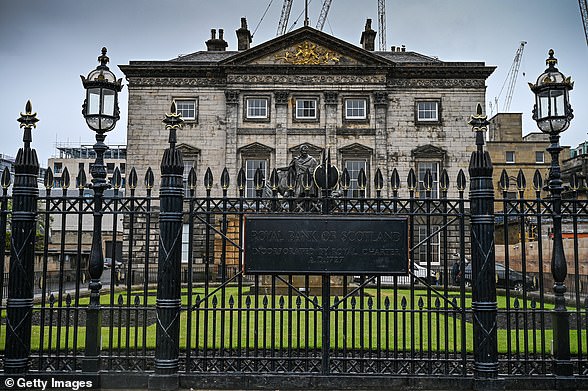 Alongside the Melville Monument, the former Royal Bank of Scotland headquarters also stands on St Andrew Square and has a statue commemorating the 4th Earl of Hopetoun, John Hope.

Hope, who governed the bank between 1820 and 1823, aided in ending a two-year slave rebellion in the Caribbean.

This led to the trade carrying on for nearly another four decades, according to Lisa Williams, director of the Edinburgh Caribbean Association.

She told Scotland On Sunday: ‘The suppression of this revolution resulted in slavery continuing for almost another 40 years.’ 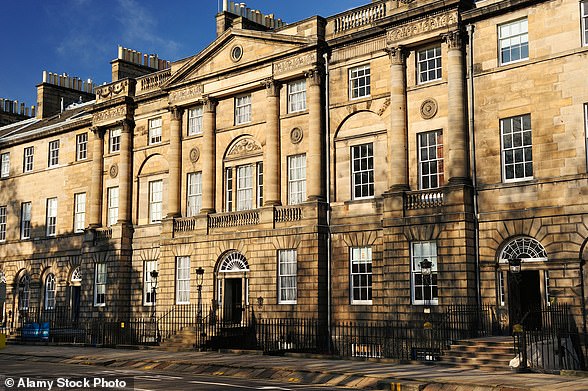 The official residence of the First Minister Nicola Sturgeon was once home to John Innes Crawford, who owned a Jamaican sugar plantation.

British politician Sir John Sinclair of Ulbster also lived in the residence and claimed recompense following the abolition of slavery.