New evidence in a mysterious Italian cold case has come to light, implicating an underworld gang in the disappearance of a Vatican schoolgirl almost 40 years ago.

Emanuela Orlandi was on her way home from a flute lesson in Rome when she disappeared near the city’s Piazza Navonaon on June 22, 1983 – at the age of just 15.

The vanishing of Orlandi, the daughter of a Vatican employee, has horrified and intrigued Italians for decades. Theories around her disappearance have run rife – with some convinced the Holy See knows more about the case than it has revealed.

Some say it was an attempt to blackmail the Vatican to release Mehmet Ali Agca – a Turk jailed in 1981 for trying to assassinate Pope John Paul II.

Another theory put forward in 2012 by an exorcist said she was kidnapped by a member of the Vatican police to be used as a sex slave and later murdered.

Others said there is a connection to the grave of Enrico De Pedis, a mobster buried in a Rome basilica who was a boss inside the Magliana Band criminal organisation.

Investigators looked into the possibility that she had been kidnapped by members of the Magliana Band in an attempt to recover money lost by crime groups when the Banco Ambrosiano, a Vatican-linked bank, collapsed.

In 1982 Roberto Calvi, the bank’s chairman, was found hanging from scaffolding underneath London’s Blackfriars Bridge.

Now, 39 years after Orlandi vanished, new evidence linking De Pedis has emerged in testimony given in 2008 by a former mobster named Salvatore Sarnataro, who pointed the finger at his own son and De Pedis when speaking to police at the time. 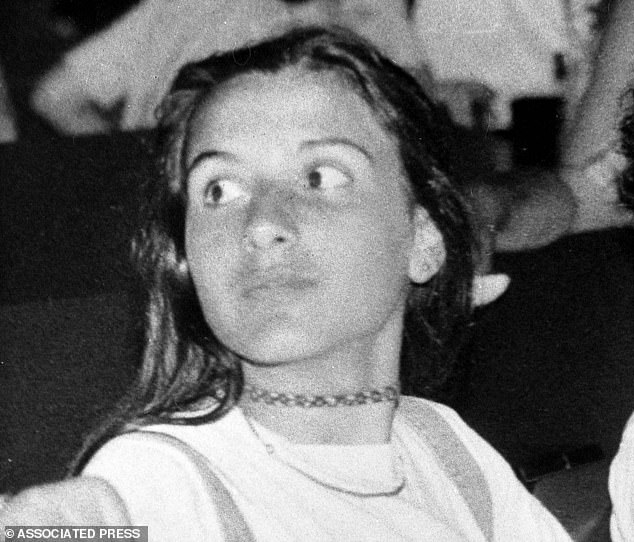 Emanuela Orlandi was on her way home from a flute lesson in Rome when she disappeared near the city’s Piazza Navonaon on June 22, 1983 – at the age of just 15

Sarnataro said his son – Marco, a gang member – had confessed to taking part in an operation to follow and kidnap Orlandi on the orders of De Pedis – who in addition to being a crime boss was also a member of the Opus Dei.

According to Sarnataro, Marco was ordered by De Pedis to tail the teenager for days before he and two others grabbed her and took her to the artificial lake in Rome’s EUR district, before handing her off to another crime boss who took her away.

‘I later learned that my son, for this courtesy, had a Suzuki 1100 motorcycle as a gift,’ Sarnataro said – according to a transcript published by Italy’s La Republica newspaper on Tuesday. Sarnataro said Marco told him of his involvement in the infamous plot when the pair were serving time in prison on drugs charges.

The transcripts show Sarnataro said he did not know why his son told him about his involvement in the kidnapping. ‘I understood immediately that he was living through a period of great fear,’ he told police. Marco had died a year prior to the testimony.

It was not immediately clear why Sarnataro’s testimony has only come to light now.

His 2008 testimony came two days after two of Orlandi’s friends had identified Marco Sarnataro from a police photograph, according to The Times.

They said at the time he was the person they had seen following them and the teenage girl in the days leading up to her kidnapping.

Orlandi’s friends said they saw Marco twice before she disappeared. The first time, they said, a man riding in the passenger seat of a car had touched her on the arm and told the driver: ‘That’s her.’

The second time was the day before Orlandi vanished. The man had trailed the group until she had walked through the gates into the Vatican, they said. 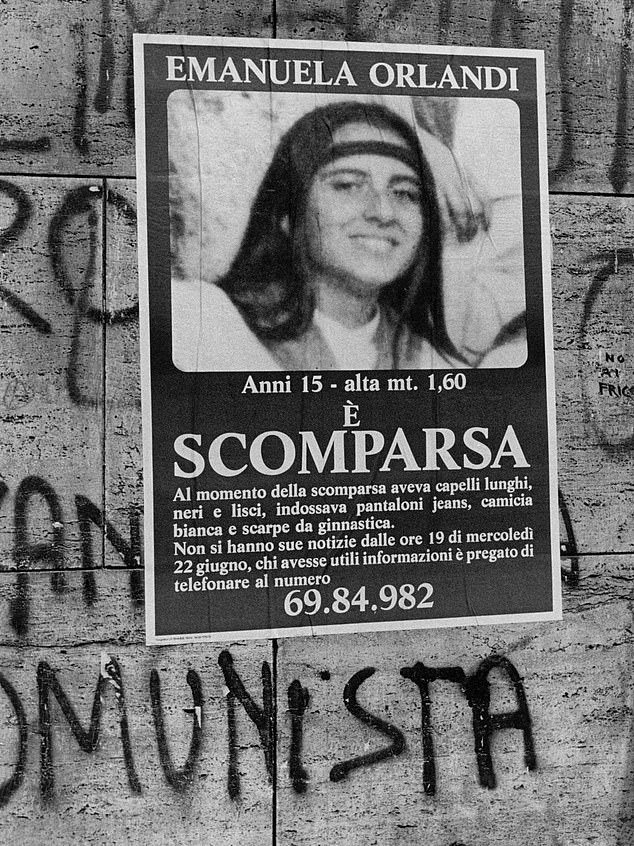 Pictured: A poster announcing the disappearance of Emanuela Orlandi is seen in Rome, 1983 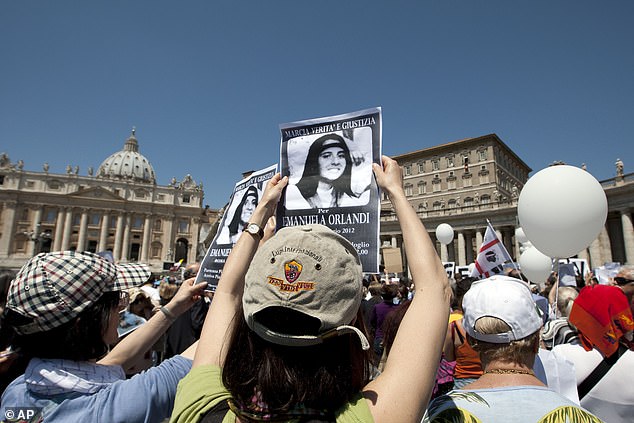 Police records seen by La Republica show that one of Orlandi’s two friends – named only as Angelo R – said with ‘a high degree of certainty’ after viewing photographs of Marco Sarnataro that he was the man they saw following them.

Another former boss of the Magbliana Band – Maurizio Abbatino – has also previously said that the kidnapping was organised by De Pedis to recover money it had lost in a Vatican bank. Some say Orlandi’s father – who died in 2004 – worked as a banker.

In April 2020, the Vatican formally closed an investigation into Orlandi after remains dug up at a cemetery proved to be more than a century old.

The cold case had resurfaced a year earlier after an anonymous tip Orlandi’s family suggested her body might be buried in the Teutonic cemetery inside the walls of Vatican City.

The Vatican had underground burial chambers near the cemetery opened and brought in forensic experts to investigate. 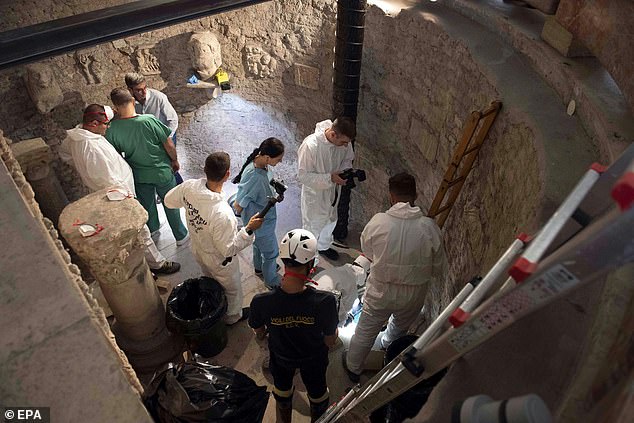 Experts opening the ossuary at the Teutonic Cemetery to investigate the disappearance of Italian teenager Emanuela Orlandi, in Vatican City,on July 20, 2019 (File image) 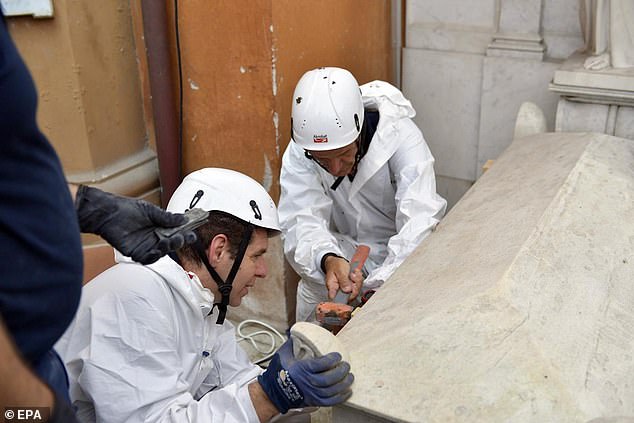 Pictured: Two tombs at the Teutonic Cemetery are opened in relation to the investigations into the case of Emanuela Orlandi, Vatican City, 11 July 2019 (file photo) 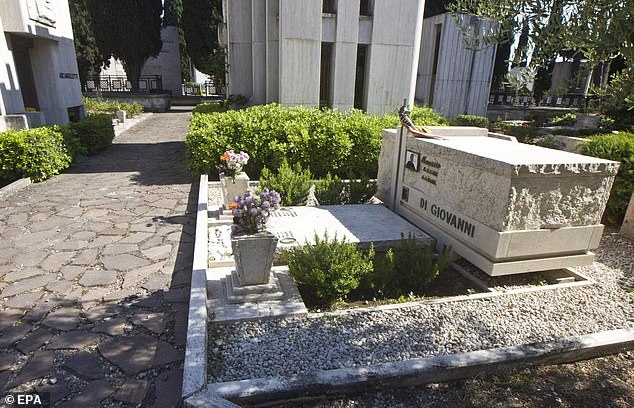 The family tomb of the wife of Italian gangster Enrico De Pedis is seen at the Verano cemetery in Rome, Italy, 15 May 2012

But tests on thousands of bone fragments determined the remains long predated Emanuela’s disappearance, the most recent ones having been interred about 100 years ago.

Based on the findings, Vatican prosecutors asked for the investigation to be shelved and, on Thursday, the Vatican said its tribunal judge had accepted the request. 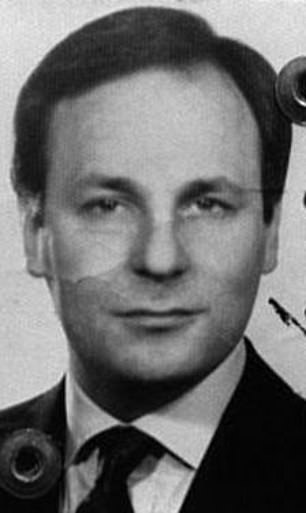 Pictured: Enrico De Pedis, who is alleged to have ordered Orlandi’s kidnapping

The case has cast suspicion on the Vatican since the teenager went missing. Her relatives have demanded the Vatican reveal all it knows, and the Holy See said it agreed to search for her body in 2019 in a show of good faith.

In a statement in April 2020, the Vatican stressed that it gave the family its fullest cooperation and said the formal closing of the investigation allows the Orlandis to have access to the bone fragments for their own tests.

In 2012, the grave of Enrico De Pedis – the mobster buried in a Rome basilica – was opened to investigate a possible link to the case – but nothing was revealed.

In 1990, De Pedis was ambushed and murdered by his former mobster colleagues. He was then buried in the Sant’Apollinare Basilica in Rome – an unusual internment for a criminal. His corpse was later removed, cremated and scattered at sea.

Pietro Orlandi, Emanuela’s brother, said ahead of the 39th anniversary of his sister’s dissappearance that he had recieved new evidence that had him convinced people in the Vatican knew her fate.

I am 100 per cent sure, thanks to these sources, that Pope Francis knows the truth about my sister,’ Orlandi said. The Vatican has always denied suggestions that it has dragged its feet over the investigation.

Who was Emanuela Orlandi? The Vatican schoolgirl who vanished without a trace almost 40 years ago

Emanuela Orlandi was 15 when she disappeared in 1983 as she returned home from a flute lesson in Rome – beginning a mystery that has gripped Italy for almost four decades.

Orlandi was the fourth of five children to Ercole and Maria Orlandi. Varying accounts say her father was either an employee for the Vatican Bank or of the papal household.

Emanuela’s older brother Pietro has previously said the family lived inside Vatican City, with the children having the freedom of the Vatican gardens.

While the school year had finished, Orlandi continued to take flute lessons three times a week at the Tommaso Ludovico Da Victoria School.

The last time Orlandi was heard from was that day, when she called home and spoke to one of her sisters, and no conclusion has been reached about what happened to her. 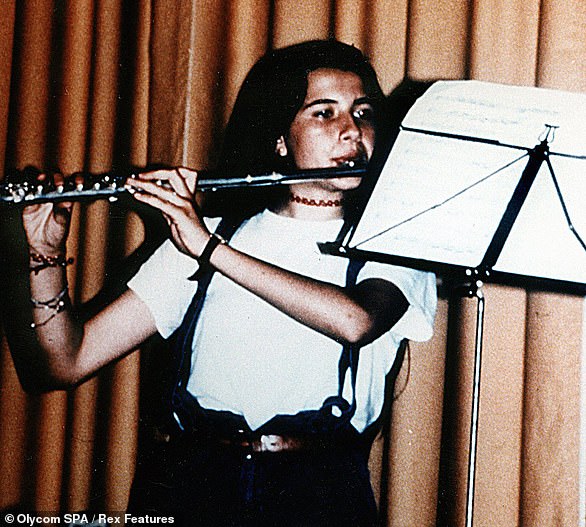 Pictured: Emanuela Orlandi is seen playing the flue in an undated photograph

In the conversation with her sister, she explained her lateness had been because she was offered a job from a representative of Avon Cosmetics. Her sister suggested she speak to her parents before accepting anything.

According to some accounts, Orlandi was last seen that day getting into a large, dark-coloured (possibly green) BMW.

Orlandi was officially declared a missing person later that day, with announcements of her disappearance being posted in newspapers along side the telephone number of her family’s household.

In the days that followed, two phone calls were recieved by people claiming they had met a girl matching Orlandi’s description. Both said she had introduced herself with a different name.

One, a 16-year-old, said she had told him she was running away from home to sell Avon products. He said she had introduced herself as ‘Barbarella’, and had been carrying her flute.

Another person by the name of Mario – said to be the owner of a bar in the area where she is believed to have disappeared – called the family and claimed a girl named ‘Barbara’ had also said she was running away from home. ‘Mario’ said she told him she planned to be home for her sister’s wedding.

On June 30, 30,000 posters displaying a photograph of Orlandi were put up in Rome and three days later – on July 3 – Pope John Paul II appealed to those behind Orlandi’s disappearance to come forward.

Two days later, the family recieved more phone calls. One said Orlandi was the prisoner of a terrorist group demanding the release of Mehmet Ali Agca, the Turkish man who shot the Pope in May 1981. 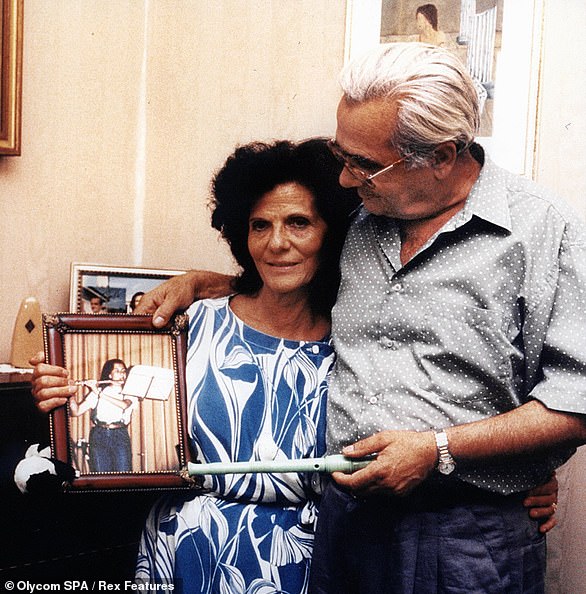 Orlandi was the fourth of five children to Ercole and Maria Orlandi (pictured together holding up their daughter’s photograph). Varying accounts say her father was either an employee for the Vatican Bank or of the papal household

Another man, with an American accent, called the family and played a recording of Orlandi’s voice. Later that same day, a man believed to be the same person called the Vatican offering an exchange – Orlandi for Agca.

Several more phone calls were made by the so-called ‘American’ in the days that followed, but the link between Orlandi and Agca was eventually deemed not to be credible. The case around the theory was closed in 1997.

In interviews since – including after his release – Agca maintained that the kidnapping, and the 1983 disappearance of another girl – Mirella Gregori – were both carried out to secure his release.

Two tombs have also been exhumed in the search for Orlandi’s body. One belonged to a mobster inside the Opus Dei church, while the other belonged to two 19th century princess sisters in the Vatican’s German church.

Bones were found inside the mobster’s tomb, but none belonged to the teenager. No bones were found in the German church tomb either – not even the bones of the two princesses – sparking another mystery.

To this day, none of the phone calls or theories have led to Orlandi’s family finding the answers they have been looking for.