A delivery driver was filmed pelting an ‘innocent cat’ with stones in bizarre footage caught on a doorbell camera.

Lisa Ferraby, 37, was alerted by her husband to the footage taken outside their home in Milton Keynes, Buckinghamshire while they were both at work.

To her horror, as she logged into the doorbell app on her phone, she could see an Evri courier – who was fired shortly after the incident – attack her cat, named Tumble, as it sat on a wall near their porch. 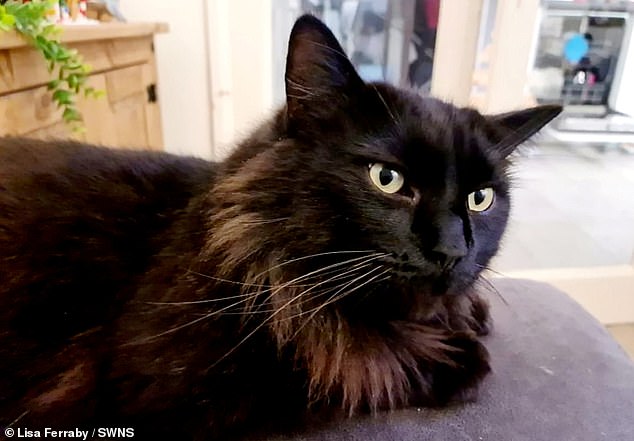 Owner, Lisa Ferraby, 37, first saw the shocking scene of her cat, named Tumble, being attacked when she was alerted by her husband whilst they were both at work

The clip shows how the courier first attempted to swat the cat with a large enveloped letter he had been delivering.

He then picks up a large stone from the front garden and hurls it at the cat as it flees the scene.

Mrs Ferraby said she didn’t know ‘whether to vomit or cry’ after watching the footage while she was at work.

She said: ‘I was at work, and I don’t really look at the doorbell because I’m in meetings a lot for work.

‘My husband called me, and I know that if I get a call outside of my lunch break then I know there is something wrong. 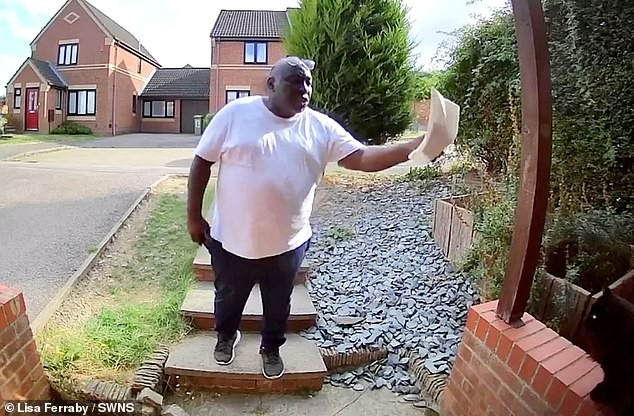 ‘He told me to go and have a look at the doorbell, I asked why and he told me that Tumble had been hit by the Evri driver.

‘I watched it, and didn’t know whether to vomit or cry.

‘I was absolutely fuming, I just wanted to leave work, but I couldn’t leave.

‘It is distressing to see that kind of thing to your own pet, and it is completely unprovoked.’

Fortunately, Tumble showed no signs of injuries but was ‘shaken and cowering in a corner’ when Mrs Ferraby and her husband Andrew got home from work.

Mrs Ferraby said: ‘We didn’t take him to the vets, we checked him over and he rolls over on his back and lets you look at his tummy and his fur.

‘Physically he seemed okay but he was shaken and cowering in a corner when we got back.

‘He didn’t eat that night which is not like him, he just seemed a little bit off which is understandable really.’ 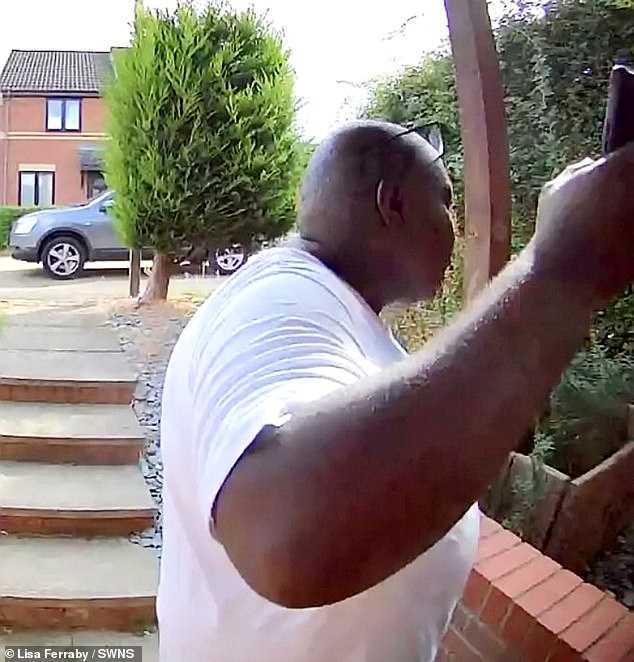 Seconds later, the driver took another a swipe at the cat before picking up a stone from the front garden and hurling it at the cat as it flees the scene 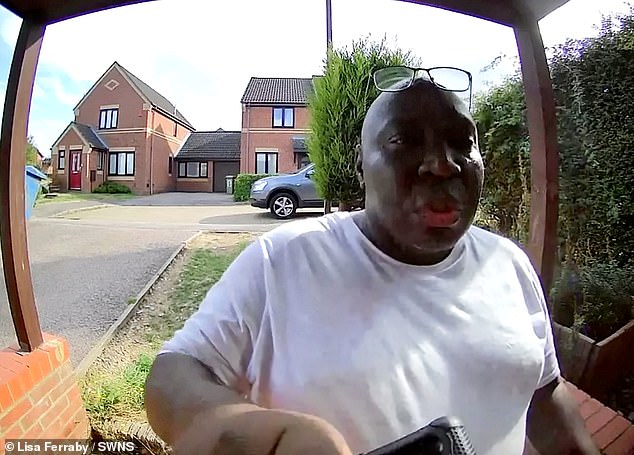 Mrs Ferraby, from Milton Keynes, Buckinghamshire, said she didn’t know ‘whether to vomit or cry’ after watching the shocking footage while she was at work

After speaking to bosses at the delivery company, Mrs Ferraby has praised them for acting so quickly and sacking the driver the next day.

The mum-of-two added: ‘I put what happened on social media, and somebody who I know’s sister-in-law is in charge of that depot, so I was put in contact with her the same evening.

‘I sent her the video on WhatsApp and she was mortified.

‘She said she had a meeting with head office the next day, and she said she was going to raise it.

‘It was on my LinkedIn, and my husband shared it, and someone who he knows who works in logistics tagged the head of Evri in it, so he contacted me and I had to email him the video as well.

‘I also tagged Evri in it on my Instagram, so someone from Evri on Instagram contacted me as well.

‘The lady who is in charge of our local depot said she would call me the next day and to be honest, I didn’t think I would hear from them.

‘But I had a phone call the next day from a lady from head office, saying that they had sacked him.

‘Then the other lady did follow up with me so I cannot fault Evri in the way they’ve dealt with it.’

Hermes changed its name to Evri earlier this year, after the company came bottom in a delivery firm league table produced by Citizens Advice.

A spokesperson from Evri said: ‘We have apologised to Mrs Ferraby and provided a gesture of goodwill.

‘This was highly unacceptable behaviour and we can confirm the courier will no longer deliver on behalf of Evri.’