F for fail! Exams staff plan to go on strike over pay… on the day A-level results are released

Staff at the country’s largest exam board are set to walk out over pay – on A-level results day.

About 180 workers at AQA are expected to strike over pay, the Unison union said yesterday, with customer services staff among those absent.

The action over three days next week means pupils waiting for exam results could face potential delays, although AQA says it has ‘robust’ plans in place to prevent this.

The walkout will last from next Wednesday, August 17 – the day before results are published – until August 21.

Unison claims the absence of staff ‘who would normally take calls from schools, parents and pupils about the results … could cause issues for thousands’.

But AQA denies this, saying students contact their schools about results, not exam boards. The exam board – responsible for around half of GCSE and A-level exams – claims it has ‘robust contingency plans’ in place to ensure A-level results are delivered on time. 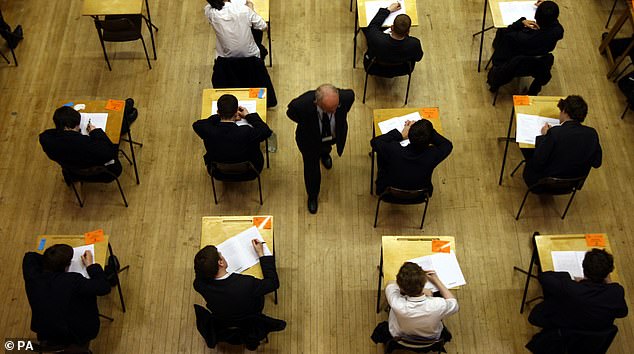 AQA staff are already due to strike this Friday until Monday next week after industrial action last month failed to resolve a row over a three per cent pay offer.

AQA said only 79 staff took part in the first strike – four per cent of the total workforce – with no noticeable impact on customer service.

Unison claims employees have been left with no alternative but to go on strike.

The union’s north west regional manager Vicky Knight said: ‘Employees at AQA are disappointed the company will neither talk to them nor come back with a realistic pay offer.

‘Disrupting A-level results day is not a decision anyone has taken lightly. However, AQA staff have been treated appallingly and only bold action will get their employer to the table.’

A striking AQA worker said: ‘A-level results day is a crucial time. Many people can remember what it was like receiving their grades. No one wants to disrupt that.’

She added: ‘AQA colleagues are coming together to take a stand … and we are determined to win a fair resolution.’

Unison said in June that seven in ten of those who voted had supported last month’s industrial action.

But AQA said it was offering an ‘affordable’ pay rise, higher than many other organisations and the highest increase for decades.

It said the average pay increase is 5.6 per cent, with 3 per cent for all staff, and a pro-rata payment of £50.

A spokesman said last night: ‘We are dismayed that Unison has chosen to deliberately target students like this, but it won’t stop us from delivering the exam results our learners so richly deserve or supporting everyone afterwards.

‘We have robust contingency plans in place to ensure industrial action has no effect on results, and we successfully tested these plans during the previous action in July.

‘Our records show that only 4 per cent of our total workforce took part in that industrial action – and the remaining 96 per cent are committed to never letting our learners down.’