Dinosaur fossils are found throughout the world, but an “exceptionally rare” discovery sheds light on what type of animals a dinosaur fed on – mammals.

In the early 2000s, the fossil of a Microraptor zhaoianus – a feathered dinosaur the size of a crow that lived about 120 million years ago – was found in northeast China. Although it was observed shortly after its discovery, Hans Larsson, a professor at McGill University in Canada, recently noticed animal remains were inside the dinosaur’s fossil.

A team of international researchers then researched the remains to confirm they belonged to the foot of a mammal. The findings were published in the peer-reviewed Journal of Vertebrate Paleontology.

Dinosaur and other ancient animal meals have been observed before, but only about 20 times, according to a press release from McGill University. The new discovery also is the first proof that dinosaurs fed on mammals.

“It’s so rare to find examples of food inside dinosaurs so every example is really important as it gives direct evidence of what they were eating,” David Hone, professor at Queen Mary University of London, said in a statement. 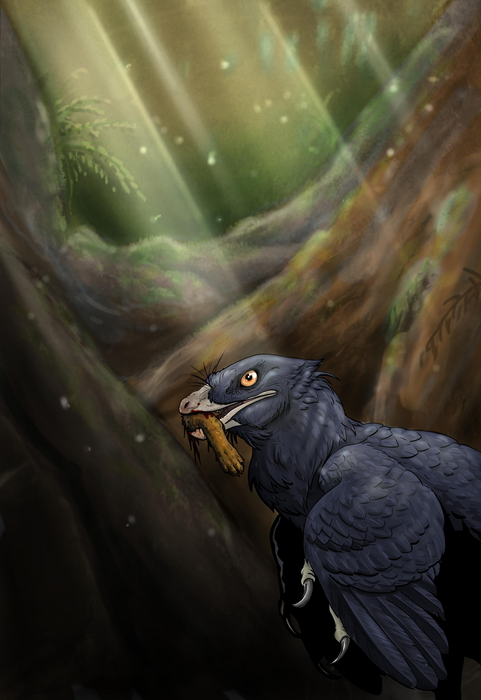 ‘Dinosaur mummy’:Researchers believe they found one of the best preserved dinosaurs ever

Researchers found that the foot belonged to an animal about the size of a mouse. Analysis of the bones suggested it was a ground animal that wasn’t good at climbing, which made it an interesting choice of food for the Microraptor, because it spent most of its life gliding from tree to tree. The dinosaur is from the early Cretaceous Period, when present-day China was covered with forests.

Previous research found the species ate fish, birds and lizards, so researchers were unsure whether it preyed on the mammal or scavenged a dead mammal. Larsson said the findings suggested the dinosaur was not a picky eater and could be evidence of a general dinosaur carnivore.

But one thing researchers could confirm: The mammal wasn’t related to humans.

“While this mammal would absolutely not have been a human ancestor, we can look back at some of our ancient relatives being a meal for hungry dinosaurs,” Hone said. “This study paints a picture of a fascinating moment in time – one of the first record of a dinosaur eating a mammal – even if it isn’t quite as frightening as anything in Jurassic Park.”