A young man injured in a car crash involving Daniel Andrews’ wife Catherine in 2013 has engaged a lawyer and is now considering whether he has any legal options in relation to the incident.

It is not known what kind of claim he hopes to bring, or against whom.

Ryan Meuleman was seriously injured and spent 11 days in hospital after the crash at Blairgowrie in the Mornington Peninsula in January 2013. According to a report in the Herald Sun on Thursday, day two of the state election campaign, Meuleman secured an $80,000 compensation payout from the Transport Accident Commission, paid after he turned 18, but the family was concerned about the process. 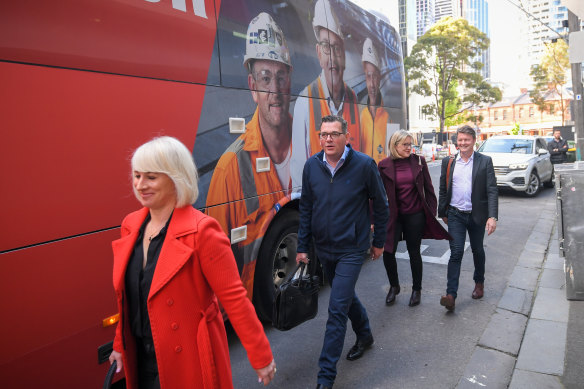 Catherine (left) and Daniel (centre) Andrews on day one of the Victorian election campaign on Wednesday.Credit:Justin McManus

The Age has confirmed that Meuleman, now 24, has engaged lawyer George Defteros, but Defteros said it was still “early days”.

He was waiting on documentation from previous solicitors and other information before any potential claim could progress, he said.

When asked when the family approached him, Defteros said that information was privileged.

Andrews’ wife Catherine was driving a taxpayer-funded 4WD when the then 15-year-old cyclist was hit, and the then opposition leader was in the car, along with their three children.

Meuleman told News Corp he was unable to speak to officers who visited his house after he was discharged from the Royal Children’s Hospital.

“They did not come back at any time thereafter to get a statement from me,” he told the Herald Sun.

Ryan told the publication he never gave a police statement to detail his version of events and felt he was “used as a pawn”.

In 2017 Daniel Andrews told reporters the young man on the bike ploughed into the side of the car.

“He was absolutely T-boned the car he hit it at such force. It was literally inside the car. That’s how much the windscreen was depressed,” he told reporters at the time.

No charges were laid at the time. Police who attended the scene did not breathalyse anyone, in breach of standard operating procedures. The officers were given a warning, but were ultimately cleared of any wrongdoing.

This failure – and a subsequent refusal by Victoria Police to release crash documents requested by media under freedom-of-information laws – prompted the Independent Broad-based Anti-Corruption Commission to review police handling of the incident.

IBAC made it clear at the time that it was “not investigating the incident or the conduct of the Premier Mr Andrews, or any member of his family”.

IBAC cleared police of wrongdoing in their internal investigation of the incident in December 2017.

When contacted for comment on Thursday, a government spokeswoman referred to the premier addressing the concerns in 2017.

Andrews responded to questions on the crash at a press conference on Thursday. “I’ve canvassed those matters in great detail and I’ve got no further comment to make,” he said.