A man in China is keeping his 219 million yuan (£26 million) lottery winnings a secret from his wife and child because he fears knowledge of the jackpot would make them lazy.

To protect his anonymity, the man, who only identified himself by the pseudonym ‘Mr Li’, dressed in a yellow cartoon character costume to claim his winnings at the lottery office in Nanning, in the southern region of Guangxi, last week on October 24, Nanning Evening News reported.

‘Mr Li’ said he was thrilled about the win but wanted to hide his identity and keep the jackpot a secret from his wife and child. 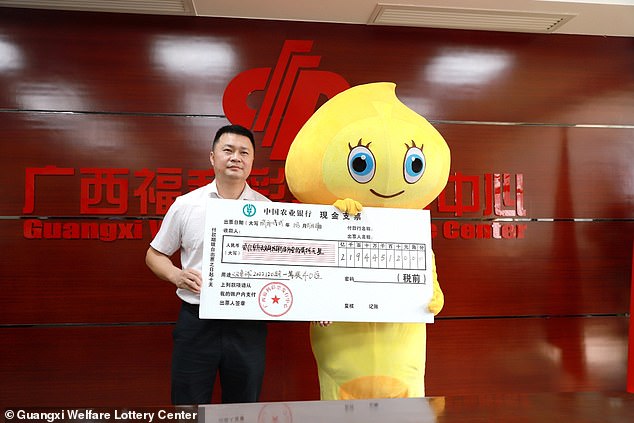 ‘Mr Li’ dressed in a yellow cartoon character costume to protect his anonymity as he collected his lottery winnings from Guangxi Welfare Lottery Center in Nanning on October 24.

‘I did not tell my wife and child for fear that they would be too complacent and would not work or work hard in the future,’ he told Nanning Evening News.

‘Mr Li’ bought 40 tickets for the draw in shop in Litang, a town east of the regional capital of Nanning. Each ticket purchased had the same seven numbers, with the lottery company paying out 5.48 million yuan for each ticket.

‘Mr Li’ then stayed in a hotel over the weekend before claiming his prize on the Monday.

‘I did not leave the hotel because I was afraid to go out and lose the lottery ticket,’ he told Nanning Evening News.

After collecting the 171.6 million yuan after tax, ‘Mr Li’ said that he had donated 5 million yuan to charity and had not yet decided what to do with the rest of his newfound fortune.

‘Mr Li’ said he had been playing the lottery for over a decade and had only ever won a few dozen yen. He said his previous strategy was to choose a new set of numbers each time but chose to stick to a favoured set of numbers a few years ago after having no luck.

The Chinese government holds national lotteries to raise money for welfare and cultural programmes. Winners are taxed on their payout.