Floodlines: How we covered Victoria’s inundation

“Good morning Michael,” I read on my Twitter feed a couple of days ago in a message from an Age subscriber. “Today is the first day in my recall where I can honestly say I’ve never seen such a bland front page.” One of the things I love about The Age is how invested people are in what we do every day. That comes with positive feedback (there is plenty of that) and critiques (also plenty).

But bland is a devastating word for an editor. My interlocutor politely pointed out that he was referring to the “total news parse” of the day. That front page, Wednesday’s, featured a picture of an Echuca man standing ankle deep in floodwater and worrying that his property was one of 190 in the town on the wrong side of the levy then being built as the Murray River rose ominously. 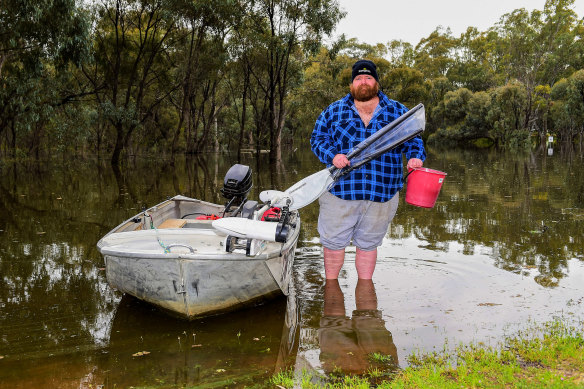 Hayden Moore’s home is one of dozens affected by the levee in Echuca.Credit:Steve Huntley/Riverine Herald

Also, on the page was a national story about the Albanese government’s West Jerusalem decision, and pointers to a story about the government’s new industrial relations legislation, and one about celebrity surgeon Munjed Al Muderis making a maggot joke, apparently referring to the flyblown wound of one of his former patients. Blandness is in the eye of the beholder, it seems. Given my time again, I don’t think I’d have made a different selection.

It did, however, prompt me to think about our editorial choices in the past week. Clearly, the floods have dominated. Floods are brown and muddy and messy. They move slowly but are devastating for those living in their path. And for many primary producers in central Victoria they carry the risk of severe damage to their livelihoods, not to mention a big inflation spike. Like bushfires, they pose immediate danger for residents and challenges for governments. Unlike bushfires, they rarely make for splashy, spectacular images.

We have spent enormous effort delivering these stories. We decided more than a week ago to run a live blog online, which we made free to all readers. We’ve had 10 reporters and a number of photographers rotating through affected towns, telling the stories of people in Echuca, Shepparton, Seymour, Rochester and Maribyrnong.

This is a labour-intensive exercise. A live blog alone takes several people to run it. Blogs have become an indispensable and popular part of what we do – they can feed people’s desire for a constant stream of information as reporters work to pull their stories together.

While some said the floods were not the time to talk about climate change, Liam Mannix wrote about it. Sophie Aubrey has reported the looting, the rorting, and objections to the government’s flood response among people on the banks of the Maribyrnong River, as well as some astonishing human stories. Bianca Hall in Echuca has catalogued the stately rise of the mighty Murray River and reflected the quiet community determination with which they have prepared for it.

Our reporting from Rochester was second to none. Benjamin Preiss and Justin McManus were stuck there for five days after it was cut off by flood water. Preiss’ final missive said he felt “momentarily entwined” with the community.

In a lull between rain events, and as the waters at Echuca are not expected to peak for days, we have pulled back from that intense coverage – there is plenty to write and think about in an election campaign that also, to some extent, took a hiatus while the rivers were overflowing their banks. We do that knowing that many communities are still facing the threat of further flooding, as well as a long, smelly and heartbreaking cleanup.

But we are watching carefully. If the rains continue to fall this summer and the floods come again, we’ll be there to tell the stories, and to ask questions of governments about their response. And just so you know, it won’t be bland.

Michael Bachelard sends a newsletter to subscribers each week. Sign up to receive his Note from the Editor.