From the Special Representative of “The Age” CANBERRA, Friday — A new Federal Ministry was sworn in this afternoon under the leadership of Mr F. M. Forde, previously deputy leader of the Government. 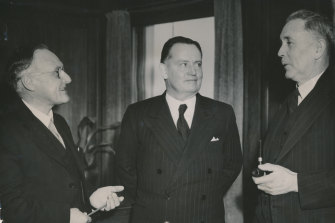 There are no other changes in the Ministry as it stood under Mr Curtin’s leadership. The Minister for the Navy, Mr Makin, will continue to act as Minister for External Affairs in the absence of the Attorney-General, Dr Evatt.

Mr Forde said tonight:—“The Governor-General, the Duke of Gloucester, summoned me today to Government House, Canberra. I tendered his Royal Highness certain advice. His Royal Highness has been pleased to ask me to form a Government.”

The Attorney-General, Dr Evatt, who is travelling on a steamer between the United States and Australia, and the Minister for Commerce, Mr Scully, will be sworn in later.

There will be a meeting of the Parliamentary Labor Caucus in Canberra on Thursday, at which members will be asked to select a leader in succession to Mr. Curtin.

If Caucus elects Mr. Forde as leader, the Ministry will probably continue as at present constituted. The new Prime Minister, however, has the right to reallot portfolios, although by party rule he cannot select his Ministers.

Caucus may choose to declare all offices vacant, which it is competent to do by a simple majority. If it does that, all offices will be declared vacant, including not only Ministers, but the President of the Senate, the Speaker of the House of Representatives, the party whip and party secretaries. This is colloquially known in the party as a “spill.”

If the party does not decide to declare all offices vacant — and there is no precedent for such a proceeding – the meeting will be concerned only with the election of a new leader.

If Mr Forde is chosen to succeed Mr Curtin, there will necessarily have to be a ballot for a deputy leader. If, on the other hand, Mr. Forde is not chosen as leader, there will be two ballots — one to select the leader of the party, and the other to fill the resultant cabinet vacancy.

Some surprise was expressed tonight that Mr Forde had been commissioned to form a Government in view of the opinion of the Government’s constitutional advisers, communicated to Caucus yesterday, that Mr Forde might continue as Acting Prime Minister, without being sworn to office, for a few days without unduly straining constitutional practice.

There is, however, no precedent in Australia for an Acting Prime Minister being required to carry on the Government of the country without being commissioned to form a Ministry.

On July 12, 1945, Frank Forde lost the Caucus leadership ballot to Ben Chifley. He resigned as prime minister the following day after eight days in the position.