BRISBANE. The Commonwealth Games began with a remarkable mixture of pomp, pageantry and goose pimples at the Queen Elizabeth II stadium yesterday.

The pomp and pageantry were orchestrated superbly. The goose pimples were not brought out so much by emotion as by a bitter westerly that blew throughout the opening ceremony. 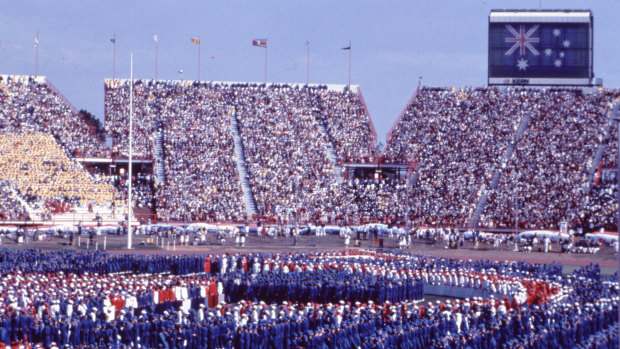 Brisbane certainly was not the sunshine capital of the sunshine State yesterday, as visitors, competitors and dignitaries shivered, ceremonial hats were blown off and Matilda – the Games’ 13-metre high kangaroo mascot – wobbled precariously on her lap of the stadium.

Gusts which reached 35 knots during the ceremony – and 60 knots in other parts of the city – caused the abandonment of a display by nine skydivers.

Through it all, every one of the 70,000 people inside the stadium managed to retain the combination of dignity and sense of humor that is the hallmark of Commonwealth Games.

More than 2000 athletes from 45 nations marched – three, possibly five, more teams are expected here within the next two days – and another 8000 schoolchildren, lifesavers, marching girls and dancers took part in a series of impressive, colorful displays in front of 60,000 spectators.

The Games were opened officially at 4.23pm when Prince Philip read a message from the Queen which 3219 runners had carried 30,000 kilometres from London in three months. On yesterday’s last lap, the relay baton was carried by Victorian Raelene Boyle, 31, Australia’s most successful woman athlete for more than a decade.

Two other distinguished Australian team members were honored during the ceremony.

Swimmer Tracey Wickham, 19, read the oath on behalf of all competitors and 400-metres runner Rich Mitchell, a Silver medallist at the 1980 Moscow Olympics, carried the Australian flag. 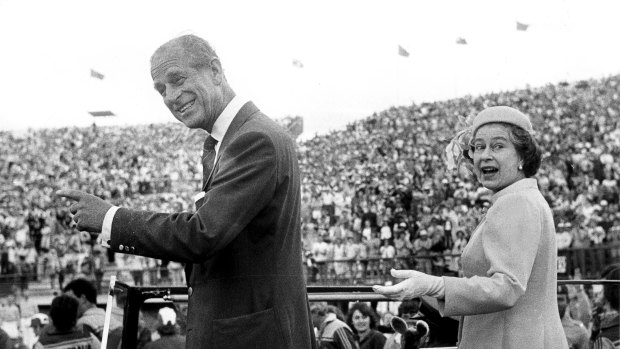 Queen Elizabeth and Prince Philip at the closing ceremony of the 1982 Commonwealth Games in Brisbane. Credit:Russell McPhedran

Earlier, Prince Philip had taken the salute as the parade of nations – many of them in traditional, tropical and, for once, highly inappropriate dress – passed the main grandstand before assembling in the centre of the arena.

The Australian team, predictably, was given the most enthusiastic welcome, but it was only marginally warmer than that accorded to the three-man Falkland Islands team. The most courageous participant was undoubtedly the New Zealand archer Neroli Fairhall who, pushed her wheelchair around the arena at the rear of her team. Fairhall, 38, has been a paraplegic since 1969.

Shortly before 2.30 the Premier, Mr Bjelke-Petersen, and his wife, arrived to frenzied cheering. The Prime Minister, Mr Fraser, and his wife received a response that was markedly more muted. A handful of other officials, including the Queensland Governor, Sir James Ramsay, and the chairman of the Commonwealth Games Foundation, Sir Edward Williams, were welcomed before the ritual display began. In this, 6074 children from schools around Brisbane battled the wind to form, in succession, a huge and human Australian flag, the Commonwealth Games symbol and the map of Australia.

Happily, the low-key moments were few, and both of them involved Australian music. The first came when we were assailed by a taped version of that monument to schmaltz ‘I Still Call Australia Home’, and the second when Rolf Harris, fresh from a tough Grand Final, gave out an abridged and rewritten version of ‘Tie Me Kangaroo Down, Sport’. Then he moved more convincingly into ‘Waltzing Matilda’ and was finally drowned out by the massed bands of the armed forces.

It took Brisbane just 2¼ hours to show the rest of the Commonwealth that three years of hard work and anguish can be worth all the effort, despite the wind.