Her grace, beauty, kindness and generosity enriched many

Joan Smith, who has died after 94 busy years, was born in 1928 to a WWI and Gallipoli veteran father, Edwin Charles Heyme (Charlie) and strict mother, Agnes (Doll), late in their marriage just before Doll turned 40.

She grew up an only child but her cousin, Geoff Taylor, became as close as a brother. They were best of friends and did much together, playing all sort of games when young, cricket, golf, tennis, hiking and biking.

Like many girls of her era, she was queen of the May and later made her debut both times in beautiful dresses probably made by her mother. She attended O’Neill College which only went to leaving standard and so being ambitious, moved to Presentation College Windsor for her matriculation.

This gave her entry to the University of Melbourne undertaking an arts degree, majoring in history, her great academic love. University years were wonderful. Joan played sport keenly, hiking, tobogganing, tennis, golf and biking. She thought nothing of bicycling from her home in Caulfield to the university and playing tennis that evening.

She joined the Newman Society and met a handsome, young medical student, Neil Smith, living at Newman College. They courted through rounds of physical activities, tennis, golf, rowing and bicycling. By the time she graduated from university, a feat achieved by very few young women in Australia at this time, they were engaged.

Joan taught history at Flemington Girls school until her marriage in December 1950. The young couple were married on a 40-degree day at Newman chapel. They had their reception at the Hotel Windsor, an interesting choice for a young woman whose father was a railway worker. When changing out of her glorious but long-sleeved wedding dress finished with rows of tiny buttons down the sleeves and front, she tore the dress off (probably from heat exhaustion) instead of carefully undoing each button. She set off unconventionally on honeymoon in shorts, no doubt again, because of the heat. Their honeymoon was a road trip over mountain goat trails through NSW in, a novelty for their ages and the times, their own car. Marriage meant more than the obvious big changes in her life. Neil had taken up practising medicine at Yarrawonga and so the eastern suburbs-raised Joan moved from the east to the north-west and never went back.

I was born in the first year of their marriage but by that time they had returned to the city to Coburg and eventually moved into their own partially built home and completely finished surgery in the then wilds of Glenroy, a muddy unmade-road suburb.

Joan, an only child, went on to have four daughters there, Vivien, Michele, Adrienne and Catherine while acting as receptionist for her overworked GP husband and taking in her increasingly fragile Aunt Padge. 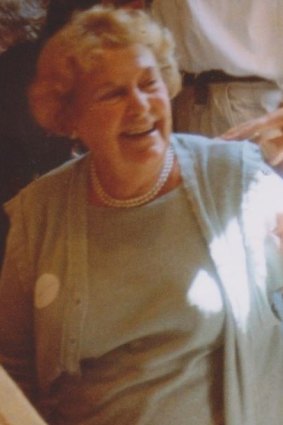 They then moved to Westmeadows which in the 1960s was a country town where mail was collected by her oldest daughter riding her pony down to the post office. Westmeadows was a true country town full of gossip, rituals, clean air and open spaces. Joan’s only contact with other women was after Mass on Sundays and tennis games between babies with the friends she made at church. Eventually, her father came to live with the family when her mother died. Joan endured the isolation and worked as hard as her husband who worked an 18-hour day as a northern suburbs GP. And, of course, night calls encroached on those six-hour sleeps. Still Joan had another three daughters, Marion, Virginia and Carolyn and then not falling pregnant for a couple of years tried her hand at returning to teaching, filling in for an absent HSC history teacher. But it was not to be her new career.

Instead, she turned to her ever-present love, clothes and opened a boutique, Casa Francesca in Glenroy and flourished. She had another daughter, Eleanor while setting up the boutique but in her formidable fashion simply tucked the baby into a basket and took her to buying sessions in the rag trade lanes of Melbourne.

Her business prospered and when Joan and Neil again moved to Essendon, Joan opened a new shop there called Czars and then for a brief time Czars 2 in High Street, Armadale. All this while rearing eight very strong-willed daughters.

There were also trips overseas. Joan and Neil were among some of the first tourists to visit China when that country opened its borders to Western visitors. They also visited New Guinea, taking in the Mount Hagen Games. Then came weddings of daughters and Joan and Neil’s first visit to Europe to attend my wedding in England. In between all this, Joan held fashion shows and was a founding member of the Ladies Wine and Food Society.

A brush with cancer for a very brief time robbed her of her strength but she was soon back to ruling life, selling the shop and instead supporting Neil in his new love, the farm and winery, Mount William Winery at Lancefield.

For the next 26 years, Joan packed up each Friday to spend the weekend at the farm. She entertained Neil’s friends and colleagues, contributed to the writing of local histories and liaised with the local Aboriginal communities over the Mount William stone axe quarry. Her discerning wine palate also helped contribute to the many awards Mount William Winery was accorded.

When Neil died in 2007, Joan, who had been a hard worker, a strong person, an excellent manager of all things, faced up to loneliness. She coped. She visited, she shopped, she pursued the Smith, Heyme and McCabe family trees and that of her daughter’s Swedish inlaws. She lunched with friends and cousins; she drove everywhere.

A few years after Neil died, Joan began to notice her memory was failing. Determined not to be a burden she eventually made the decision to move into an aged-care facility, a name she disliked. “They should call them something else,” she said. “An elf centre or some such thing.”

The next 11 years were full of conversation with her friends at Elouera, outings with her daughters and activities where her wonderful intellect made her the queen of history and knowledge at Elouera. She was much loved and respected by all the staff.

At the grand age of 94 years and four months she left us, impoverished by losing her but enriched by her grace, beauty, kindness and generosity.

Vivien Verlaan is the oldest of Joan Smith’s eight children, all daughters.