Households are sent letters warning E.On energy bills will rise from £180 to £458 despite price cap – after Liz Truss insisted soaring bills were a ‘price worth paying’ in the fight against Russia

Energy firms are sending households notice of the vastly higher direct debits they will pay within days – despite the Government’s price freeze – as Liz Truss insisted soaring energy bills are a ‘price worth paying’ to combat Vladimir Putin.

E.On customers were among those to raise a flurry of complaints on social media on Thursday as the firm sent emails detailing significantly increased payments, even for those whose accounts are in credit.

What is Liz Truss’ ‘energy price guarantee’ – and is it really a cap on bills?

What will I pay?

You will still pay for the electricity and gas you use, but the Government will cap the unit price to prevent it rocketing this winter.

Liz Truss said the new Energy Price Guarantee will mean an average household will pay £2,500 a year – roughly £1,000 less than the new energy price cap, which was due to come in on October 1.

Is it a cap on bills?

No. Homes that use more energy than the average household will end up paying more than £2,500-a-year, because the cap refers to the price of a unit of gas and electricity – not the actual bill.

But most people will not pay more than £2,500. Overall, household bills will still be 96% higher than last year.

How will it work?

Ministers will sign legal contracts with the energy suppliers requiring them to supply domestic customers with fuel at a fixed price. The taxpayer will then make up the difference between the fixed price and the market level.

The Prime Minister said the price freeze would stay in place for two years, taking it up to the likely date of the next election. In reality, there will be intense pressure to retain it for longer if prices remain high and a decision on extending it is likely to become a central election issue.

Tomorrow Chancellor Kwasi Kwarteng will deliver his tax-cutting ‘Emergency Budget’ as it was revealed almost half of Britons are now struggling to pay energy bills.

But today interest rates were raised by the Bank of England by 0.5% to to 2.25% – the highest level in more than 13 years – meaning millions on variable rate mortgages will also be paying more each month as the cost of living crisis deepens.

Panicked householders have revealed that their energy firms have been putting up their direct debits for gas and electricity – sometimes up to £300 per month more – despite the Government’s freeze just around the corner.

One E.On customer, Danny Stuart, wrote: ‘Anyone else got an email from their energy supplier, massively increasing their direct debit from 1 October? So much for things staying the same! I thought the cap announced would see prices freeze.’

Marija Lewis posted: ‘Wow @eon-next please could you explain this? My bill for last month was £97 (yes we are really scaling back and rarely home). Based on new prices it would have been £118. You are putting up my direct debit from £180 to £458???’.

Under the Government’s ‘energy price guarantee’, bills for the average household will go no higher than £2,500 at any point over the next two years.  It will save a typical home around £1,000 from October 1, when the current consumer price cap had been set to soar, according to official estimates.

But the  E.On emails led to confusion as they did not make clear if the Government’s £400 payment to all households to offset higher prices – to be automatically deducted from accounts in £66 and £67 monthly amounts from October to March – had already been applied to the higher direct debits.

The average household energy bill will rise from £1,971 to a frozen £2,500 on October 1 under the energy price guarantee announced by Prime Minister Liz Truss earlier this month.

This is an increase of 27% from the previous price cap, which limited the rate providers can charge customers on a standard variable tariff.

Overall, household bills will still be 96% higher than last year. 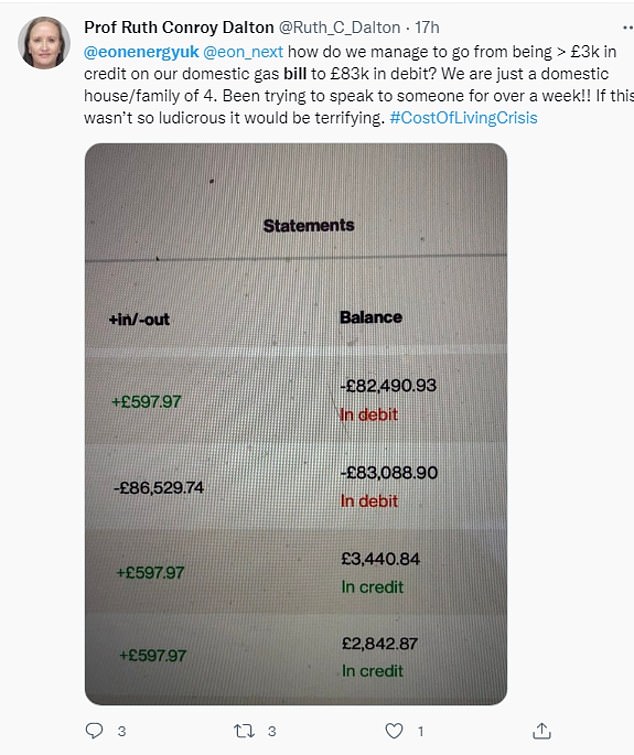 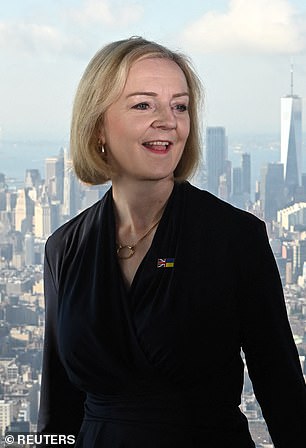 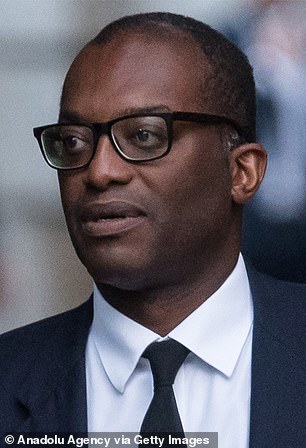 Speaking from the top of the Empire State Building with the imposing vista of New York behind her, Liz Truss said she will keep their energy bills down from October. Ms Truss struck a defiant tone ahead of a mini-Budget due to be unveiled by Kwasi Kwarteng (pictured) on Friday

Bills for businesses, schools and charities will be cut in half this winter costing the taxpayer ‘tens of billions of pounds’, the Government said yesterday.

Ministers announced that the price of gas and electricity will be capped from October 1 for six months to ‘provide certainty and peace of mind’ through the winter.

The scheme, which will also benefit hospitals and care homes, is broadly in line with the £2,500 price guarantee offered to households.

Cornwall Insight, a market analyst, estimated the cap will cost the government £25billion, which is likely to be funded by Government borrowing.

The Business Department suggested a pub fixing its energy costs last month would save around £3,100 per month from the intervention, while a school would save £4,000 per month.

Business and education leaders welcomed the ‘unprecedented intervention’, saying it will give a ‘lifeline’ as they face the winter, but opposition MPs said handing a blank cheque to highly profitable firms such as Amazon was a ‘waste of taxpayers’ money’.

Prime Minister Liz Truss said: ‘I understand the huge pressure businesses, charities and public sector organisations are facing with their energy bills, which is why we are taking immediate action to support them over the winter and protect jobs and livelihoods.

As we are doing for consumers, our new scheme will keep their energy bills down from October, providing certainty and peace of mind.’

An E.On spokesman said: ‘We’re contacting customers to explain recent changes in the energy market and how their bills and direct debit amounts will change from October 1.

‘This includes details of the Government’s Energy Price Guarantee (EPG), which sets the price of energy across the country, and the previously announced Energy Bills Support Scheme which will cut bills by a further £400.

‘As ever, any customer with a query can get in touch to discuss their account directly and we have detailed information on our website.

‘We know these are difficult times and we’d urge any customer who is struggling to get in touch as there are ways we can help, including cold weather payments and targeted support such as through our E.On Next Energy Fund.

‘We also work with agencies such as StepChange, Citizens Advice and Energy Advice Scotland and we have dedicated phone lines for customers at risk of being off supply or in other emergency situations.’

Some customers who pay by direct debit have seen their bills reduced as a result, as providers adjust payment plans to reflect the new policy.

EDF Energy had previously increased the direct debits of some customers at the start of the month when bills were projected to rise to an average of around £3,500 before the Government intervened.

Customers of OVO Energy also complained that the supplier had asked them to raise their direct debit last month, only to lower them following Ms Truss’s announcement.

Citizens Advice advised customers who are confused about their direct debit increases to ask their supplier directly.

Ofgem previously urged providers to take ‘urgent action’ after a review found ‘a range of weaknesses or failings in the way they charge customers’ direct debits’.

The results of the review, published in July, found five suppliers had ‘moderate or severe’ weaknesses. 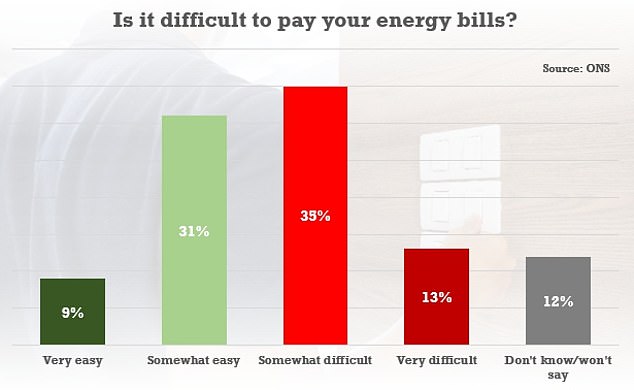 Some 48 per cent of adults are finding it ‘very or somewhat difficult’ to afford their energy costs, according to the Office for National Statistics 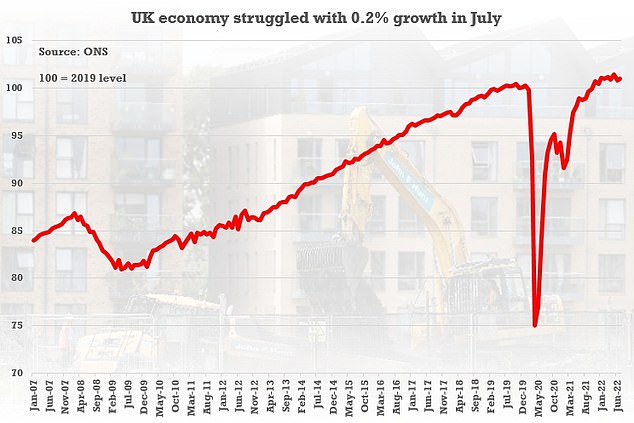 More than seven million households saw their direct debits increased between February and April, with 500,000 facing an increase of more than 100%.

Almost half of Britons are now struggling to pay energy bills, it was revealed today.

Some 48 per cent of adults are finding it ‘very or somewhat difficult’ to afford their energy costs, according to research.

The Office for National Statistics found the proportion was three percentage points higher between August 31 and September 11 than a fortnight earlier.

The grim signs emerged with the Chancellor drawing up the critical fiscal package, which is due to be unveiled next Friday after the Queen’s state funeral.

New PM Liz Truss has pledged to reverse the national insurance increase and could bring forward an income tax cut, alongside dropping a schedule hike in corporation tax.

However, it is unclear how soon she will implement the changes to revive the economy and help ease the burden on families.

Households have already seen their energy costs surge by 54 per cent after the price cap for an average home increased to £1,971 in April.

The fortnightly ONS cost-of-living survey revealed an increase in concerns from consumers over their regular spending.

It showed that 82 per cent of adults reported ‘being very or somewhat worried about rising costs of living’ in the past two weeks, edging up from 81 per cent a fortnight earlier.

It compared with 74 per cent when households were first asked the question in May.

Around a quarter of adults – 26 per cent – also said they are unable to save as much as usual, when asked about the current state of their household finances.

That included lifting the ban on fracking and new licences for North Sea oil and gas, as well as boosting nuclear, wind and solar.

Mr Kwarteng is due to give specifics of how the plan will be funded at the ‘fiscal event’, as well as fulfilling Ms Truss’s Tory leadership campaign pledges to cut taxes.