REVEALED: How the FBI use genetic genealogy to trace suspects like accused Idaho murder killer: Cops tracked distant relatives then secretly collected DNA and compared it to unidentified sample at crime scene

The FBI tracked down Idaho murder suspect Bryan Kohberger by tracing his distant relatives through genetic genealogy databases then secretly collected a sample of his DNA which they matched to that found at the crime scene, experts revealed today.

Kohberger was arrested on Friday in Pennsylvania, 2,500 miles from the crime scene in Moscow, Idaho, where is accused of murdering the four students in a stabbing frenzy on November 13.

He is due in court in Pennsylvania today for an extradition hearing that will send him back to Idaho.

Police had been tight-lipped about their investigation but confirmed over the weekend that he was tracked down by a combination of DNA tracing and investigative work.

Kohberger has no prior criminal record which means his DNA was not in any law enforcement database. 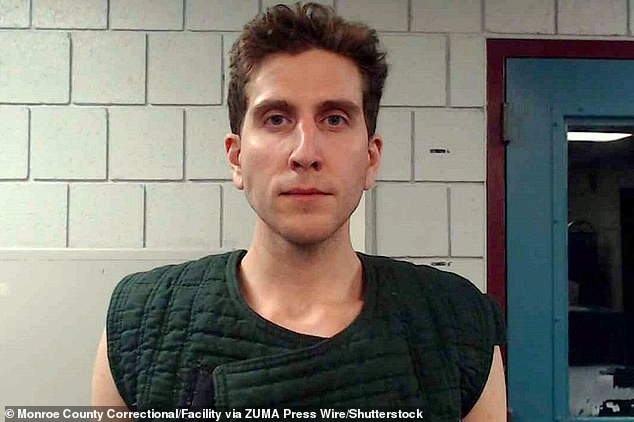 Bryan Kohberger, 28, was arrested on Friday on suspicion of four counts of murder for the brutal November 13 killings of four Idaho students

Instead, he was found through a method known as genetic genealogy – an increasingly popular and useful method of investigation where law enforcement trace suspects’ relatives on ancestry websites.

CeCe Moore, Chief Genetic Genealogist at Parabon & Founder of DNA Detectives, who has helped law enforcement solve more than 240 crimes, did not work on the case but is widely considered the most authoritative expert in the industry.

She explained to DailyMail.com the process the FBI likely followed, based on her own understanding of the case and past work with law enforcement.

1) Finding the sample at the crime scene

The first step in the investigation is finding a DNA sample at the crime scene.

In the Idaho case, the alleged crimes were so physical and brutal that it would have been easy for the killer to accidentally leave their own blood, let alone hair fibers or any other, less obvious bodily fluid.

‘If this is the killer, then I’m sure he sure he tried very hard not to leave behind a sample given his background in forensics but it’s almost impossible not to. Even if he was suited up like Dexter. 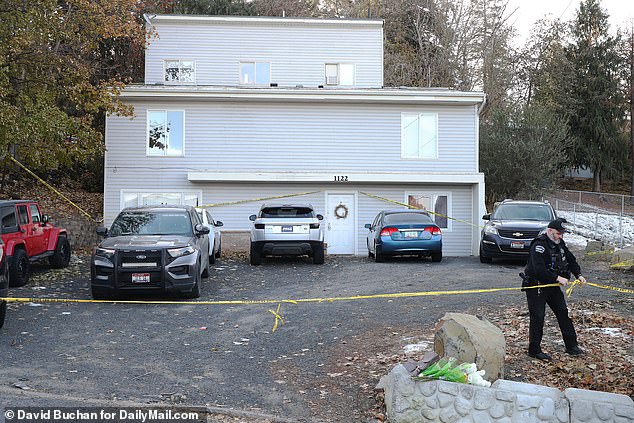 Police found the DNA of the suspect at the murder scene, the victims’ shared house in Moscow, Idaho

‘When you’re in a frenzy stabbing someone, it’s extremely common for the knife to slip and for you to get cut. Even if he had on gloves.

‘We also know that one of the victims put up the fight of her life. If that is true, she maybe was able to scratch him and  they could have collected DNA from her fingernails.

2) Building a DNA profile and running it through police databases

When DNA is found at the scene of the crime that does not belong to victims, the first thing police do is run it through their own database of previous offenders.

This tests 20 DNA markers – enough to identify the person if their own DNA is already in the system or if their immediate relative is in the system (eg a parent or a sibling).

If both strike out, investigators have to look to genetic genealogy.

Unlike police DNA databases, those of commercial genealogy companies can search for up to 1million DNA markers, creating a much wider pool of relatives to sift through than what any police search could produce.

But while there are many commercial ancestry websites, only two allow law enforcement to search their databases openly, according to Moore.

‘There’s a huge misconception that we use Ancestry.com and 23AndMe but they don’t allow it. Only the two smallest databases – GEDMatch and Family Tree DNA – do allow it, and they deal with around 2million people. 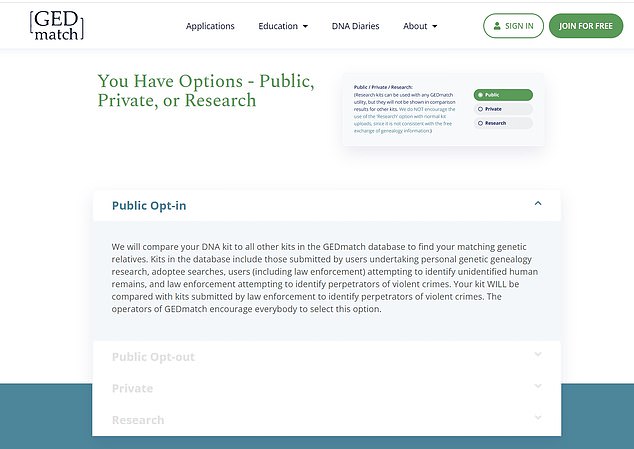 Only two commercial genetic genealogy websites allow police to openly search their records. They are GEDMatch.com and Family Tree DNA. When someone submits their data  by requesting a DNA testing kit, they have the option to opt in or out of the search results

‘So with that, you have to either get lucky or be really skilled.’

Kohberger’s likely matches from the databases are second, third and fourth cousins, according to Moore – not his close relatives.

In most criminal cases, she said the suspect who is eventually identified has likely never met most of the people he or she shares DNA with.

‘You get a match list which will have hundreds or even thousands of people on it and most will only share tiny amounts of DNA.

‘You’re really hoping for a second cousin, but probably in this case they were working with third, fourth and fifth cousins. Sometimes you get lucky and it’s a first cousin or even a sibling or parent, but it’s very rare.

‘You’re looking for patterns and commonalities and you need to find that one person who is related to all of the people at the top of the list.

‘Then, you work forward from that and build out the family tree.’

4) Building a family tree using social media, land records and more based on the list of partial DNA matches

Eventually, genetic genealogy will lead to an immediate relative of the suspect whose DNA was collected at the crime scene, or at the least a grandparent, according to Moore.

Once that stage is reached, detectives look at other methods of narrowing down who the suspect might be.

‘When we get a match in GEDMatch of Family Tree DNA, the vast majority of the time there is little information there.

‘We have to figure out whos this person, who are their grandparents, then when we’re building forward in time, it’s really hard work.

‘Once you get past the 1950 Census in the US, there aren’t anymore records so we have to start using newspaper articles, birth records in state databases, you can learn a lot from social media too.

‘As you come closer and closer to the present day, it becomes harder.

‘In the US, we have search databases, basically these companies that collect information on all of us and compile it and sell access to these databases. Like Whitepages or BeenVerified or US Search. You can put their name in and see who they are connected to. It’s really difficult and time intensive.

‘In the UK it would be extremely difficult and impossible sometimes because of the privacy restrictions. In Canada, it’s extremely difficult for the same reason. In a way we’re fortunate, but on the other hand if someone is worried about privacy, they should really be thinking about those databases – not the DNA websites.

‘Your DNA is meaningless if I can’t build the family tree.’

5) Narrowing down a suspect

Once the genetic genealogy trail has run cold, the investigators start to look at possible suspects based on other factors.

‘Once we narrow it down to say grandparents, you’ve got to say “who are their grandchildren? Who is living in the right place at the right time? Who’s the right age?

‘From their DNA, we can also predict skin color, hair color, eye color.

‘In this case it’s possible they didn’t have enough to get all the way to his immediate family, then they got to his grandparents and had to look at all of the male descendants. 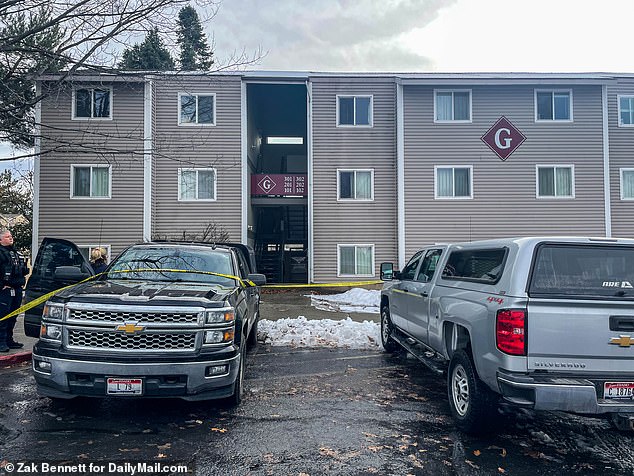 ‘Then they’d say “who drives the white Elantra?” (the vehicle spotted in the area around the time of the crime) and “who lives in the area?” Which man could it be?

‘It’s possible they got 10 male descendants. They look then at whether any of them fit.

‘Once they found Kohberger’s white Elantra, it will have been a huge ‘aha!’ moment.

‘Plus the fact he lives just seven miles away, most of the time the genealogy leads you right back to the scene of the crime.

Once a suspect is nailed down, genealogical investigators turn their findings over to police.

Undercover or covert teams then follow the suspect and surreptitiously obtain a sample from them in order to compare it to the sample found at the crime scene, that was used in the DNA tracing.

Moore – who has turned over similar evidence to cops 250 times through her company – says this part of the process is often carried out in the same way it is portrayed in films and TV shows.

‘Genetic genealogy is only a lead generator – it’s not evidence.

‘It can’t be used to arrest anyone or in a warrant. We’ll write a report up, explain how we came to this conclusion, then law enforcement have to take this information and do a full investigation. It’s a highly scientific tip but police still have to start from scratch once they get it.

‘They have to go and collect their DNA which they do by following them. We’ve heard that’s what happened in this case.

‘People don’t get arrested based on my work alone. 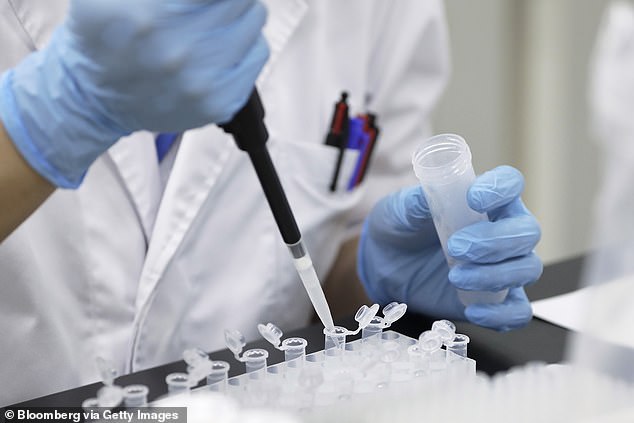 Once genetic genealogists have handed over their suggestion of who they believe the suspect is, police have to then obtain a DNA sample from that person and compare it to the sample found at the scene in order to lock in a match (file photo)

‘What they get arrested for is  once law enforcement has collected their DNA surreptitiously and compared it against the sample found at the scene using only 20 DNA markers, and the lab says “this is a match”, hopefully then they can arrest, prosecute and hopefully convict.

‘The genetic genealogy portion is not presented to the jury. It’s not something that needs to be explained in court…

‘There are teams all over the country doing this on so many cases, following these suspects that have been identified, collecting cups and napkins and sometimes they’ll go through their trash, they’ve used envelope that have been licked. 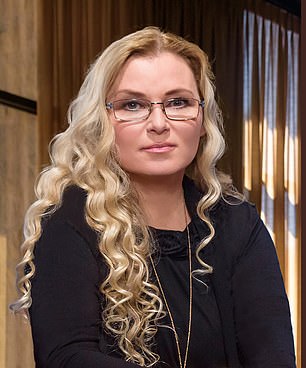 CeCe Moore, Chief Genetic Genealogist at Parabon & Founder of DNA Detectives, who has helped law enforcement solve more than 240 crimes, did not work on the case but is widely considered the most authoritative expert in the industry

‘We leave our DNA behind everywhere. Once you’ve been identified as a potential suspect, they are going to get your DNA.’

Police have not yet revealed their evidence against Kohberger. He is awaiting extradition from Pennsylvania to Idaho.

They have not yet revealed what kind of DNA evidence he left at the scene either.

Moore said the case highlights the need to run genetic genealogy testing immediately after an unidentified sample is collected from a crime scene.

‘I’ve been advocating for using this immediately as soon as they don’t get that first hit using the police databases. It looks like that’s exactly what they did here.

‘It can stop criminals in their tracks and prevent other people from being hurt. This can stop serial killers and rapists because we can identify them after the first time.

‘This could have been a Ted Bundy or a Zodiac killer,’ she said.