How Ukraine hit back against Russia and reshaped the war

Kyiv: In a war that has for months been defined by grinding battles between two armies along largely static front lines ranging 2400 kilometres, the stunning speed of Ukraine’s advance in the country’s north-east has reshaped the conflict in a matter of days.

On Saturday (Europe time), Ukrainian soldiers retook a city that had long been a linchpin of the Russian military campaign in the east, Izium, and continued to raise their blue-and-yellow flags over dozens of towns and villages that were occupied by Russia days ago. 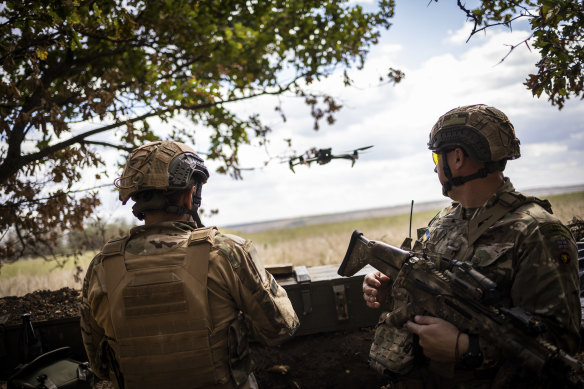 Later that day, Russia’s Defence Ministry confirmed it was withdrawing troops from the Kharkiv region, and regrouping in Donetsk.

The northern advance was carried out alongside another Ukrainian campaign, in the country’s south. There, thousands of Russian soldiers west of the Dnieper River appear to be increasingly isolated and cut off from resupply, as Ukrainian forces have gradually broken through front-line defences and shelled Russian targets deep behind the front.

While the swift assault in the north appears to have caught Russian forces by surprise, the Ukrainians have been laying the groundwork for it for weeks.

Here is a look at the importance of the battle to reclaim Izium, how the Ukrainians set the stage for their offensives, and why the events unfolding this week could prove pivotal in the war.

The Russian siege and capture of a critical hub

The first Russian rockets struck the small city of Izium in north-eastern Ukraine on February 28, as part of a multipronged invasion that Moscow believed would lead to the rapid collapse of the government in the capital, Kyiv.

The city of 40,000 was quickly surrounded, and for three weeks in March, Russia laid siege. Some residents fled, others hid in shelters, and homes, shops and apartments were battered by shelling until Russian troops rolled in.

By the time those that remained emerged from their basements at the end of March, Russia was in control.

During the months that followed, Russia used Izium as a base of operations and command centre, relying on its hub of roads and railways to resupply troops. The city became a military way station for Russia, supporting its campaign to seize Ukraine’s eastern Donbas region, which in the spring became the Kremlin’s main objective after its failed attack on Kyiv. 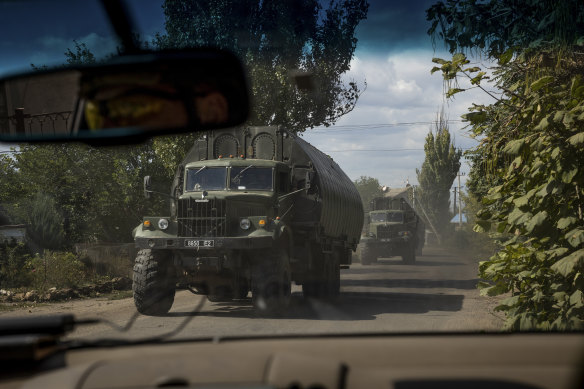 Parts for a pontoon bridge are moved toward the Inhulets River by the Ukrainian military, near the Kherson front in Ukraine on September 5.Credit:Jim Huylebroek/The New York Times

Supplies flowing through Izium helped sustain Russia’s vast expenditure of ammunition in that campaign. At one point in June, Ukraine was almost out of ammunition and Russia was killing as many as 200 Ukrainian soldiers a day, according to Ukrainian officials.

Losing ground in the east as Russia used Izium to support its capture of two embattled cities in late June and early July, Ukraine retreated to stronger defensive positions. With that movement and the arrival of Western weapons and ammunition, Ukraine stabilised its defensive lines in the east. Russia stopped gaining ground and Ukraine began setting the stage for a new phase of the war.

A summer of shifting forces and disruptive attacks

In late July, as precision long-range missile systems began to arrive in Ukraine, Russian ammunition depots behind the front lines began to explode. Ukrainian officials, in statements and social media, would release one tally after another of what they claimed to have destroyed. And while it was impossible to verify all their claims, there was video evidence of many strikes.

But unlike in the spring, when a convoy of Russian military vehicles stuck north of Kyiv gave a clear indication of Russia’s logistical problems, it was hard to know the toll of the strikes in the late summer.

In interviews with Ukrainian political and military leaders throughout August they all repeated a common sentiment: Just wait.

Mykhailo Podolyak, an adviser to Ukraine’s president, said that even if Ukrainian forces hit five depots a night, Russia held vast supplies and it would take time to set the conditions for an offensive.

In addition to using the newly arrived, long-range weapons from the West, Ukraine deployed special forces, sometimes working with partisans, to disrupt Russian activities behind enemy lines — a campaign to target not just supply hubs, ammunition depots and command centres, but also Ukrainians collaborating with the Russian authorities.

When Ukraine struck an airfield in Crimea in early August, the first of what would be a wave of strikes aimed at the territory seized by Russia in 2014, they were not only attacking a Russian stronghold, but preparing for a well publicised next step — the southern counteroffensive.

Throughout August, Ukraine signalled it was readying to push south with highly visible strikes. Every bridge crossing the Dnieper River, which bisects Ukraine from north the south, was hit time and again in an effort to isolate groups of Russians.

Russia raced to reinforce garrisons on the west side of the river in the southern Kherson region, with analysts estimating that they deployed 15,000 to 25,000 soldiers by mid-August. They pulled concrete from irrigation ditches, according to satellite photos, and reinforced three lines of defence.

At the end of August, Ukraine attacked, saying its forces managed to break through the first line of Russian defences in multiple locations.

But the state of the offensive remains shrouded in secrecy, as Ukraine and Russian proxies make competing claims, and as the Ukrainian military imposed sweeping new restrictions on access for journalists to the front line, including asking pro-Kyiv military bloggers to not reveal details of troop movements.

It is unclear where that offensive stands. Russia had months to reinforce and fortify the region, but many of its troops may now be straining to resupply. Ukrainian troops have described heavy casualties, and difficult battles in the region. But those troops also reported even steeper Russian losses.

Ukraine’s opportunity in the north

Early this week, the first reports began to trickle in from around the city of Kharkiv. Ukrainian troops were on the move, but it was not exactly clear where.

The northeastern city, Ukraine’s second-most populous before the war, has been under bombardment by Russian forces since the first hours of the invasion. The shelling has never truly relented, and officials have steadily reported civilian casualties, even as Ukrainian troops drove Russian forces from the outskirts of the city as far as the border, just 25 miles away. Since the spring, fighting has continued but not resulted in major shifts in territory.

The Russian stronghold in Izium, vital to supporting so many phases of the Russian campaign, even when Russian troops became bogged down or slowed to a crawl, did not seem like a weak point.

But in early September, Ukrainian forces around Kharkiv swept southeast, attacking Russian positions where the defences had thinned out – in part because of Russia’s persistent manpower problems, but also, likely, because of the Kremlin’s significant redeployment of troops to southern Ukraine.

Day after day, Ukrainian forces advanced farther behind Russian lines, moving to surround Izium and retaking towns and villages in their path. Russian forces fell back in droves, and pro-Kremlin bloggers reacted with shock and dismay at the sudden collapse of defences. On Friday, Russia’s Defence Ministry said it was reinforcing the Kharkiv region; on Saturday, it confirmed it had pulled forces back to “regroup.”

Although the statement sought to portray the withdrawal as a planned move, military equipment left scattered in the region indicated a hasty retreat to avoid encirclement.

By Saturday evening, Izium was among the centres that Russia abandoned, boosting Ukrainian morale, providing Ukraine with its own hub for operations in the east, and depriving Russia of an important centre for keeping its war machine moving.