A brawl broke out between officials at Kenya’s election results centre in Nairobi amid accusations of vote rigging and a delayed announcement, with William Ruto controversially declared the winner.

Supporters of rival presidential candidate Raila Odinga were up in arms as four out of seven election commissioners said they could not recognise the results nor take part in the announcement.

The scuffles, which saw chairs flying and punches thrown, came as it appeared that a backer of Raila Odinga tried to block the head of the election commission from making an address.

While Mr Ruto arrived at the national tallying centre at 1pm local time for the expected announcement, Mr Odinga did not show up.

His party’s chief election agent announced he would not ask Mr Odinga to go to the tallying as his team had not been able to verify some of the results.

‘We cannot take ownership of the result that will be announced,’ Independent Electoral and Boundaries Commission (IEBC) vice chair Juliana Cherera told reporters, saying the process was ‘opaque’. 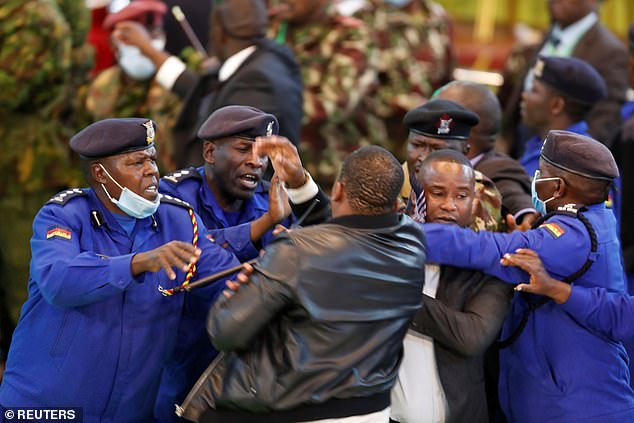 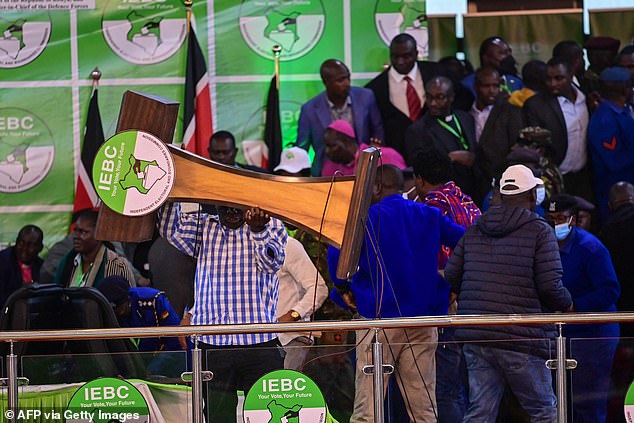 The scuffles, which saw chairs thrown and punches thrown, came as it appeared that a backer of Raila Odinga tried to block the head of the election commission from making an address 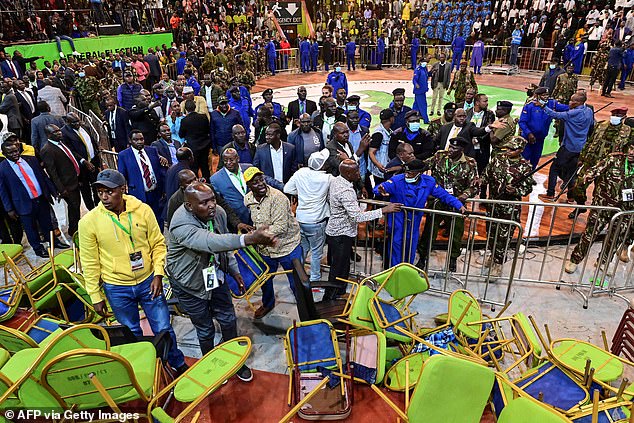 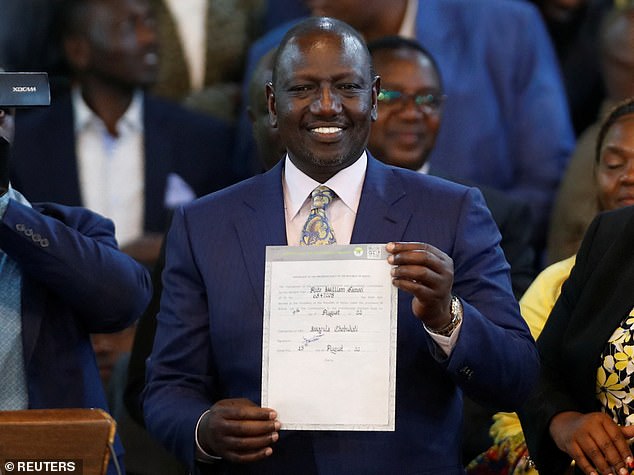 ‘We are going to give a comprehensive statement… and again we urge Kenyans to keep calm. There is an open door that people can go to court and the rule of law will prevail,’ she said.

Mr Odinga’s party agent had alleged there were ‘irregularities’ and ‘mismanagement’ in the election.

William Ruto, 55, served as Kenya’s deputy president for ten years before running for the presidency. He fell out with the previous president, Uhuru Kenyatta, who backed Mr Odinga to succeed him.

Diplomats and international elections were whisked out of the tallying hall where the chairman of the electoral commission was preparing to announce the presidential results.

The announcement was finally made around 5pm local time – a delay of four hours from the expected time, with Mr Ruto squeezing victory with 50.49 per cent of the vote to Mr Odinga’s 48.85 percent.

A run-off would have been declared if neither candidate had secured 50 per cent of the vote, giving Mr Ruto the bare minimum he needed for victory.

In his speech, Mr Ruto acknowledge his razor-thin winning margin and the divided nature of the Kenyan electorate. 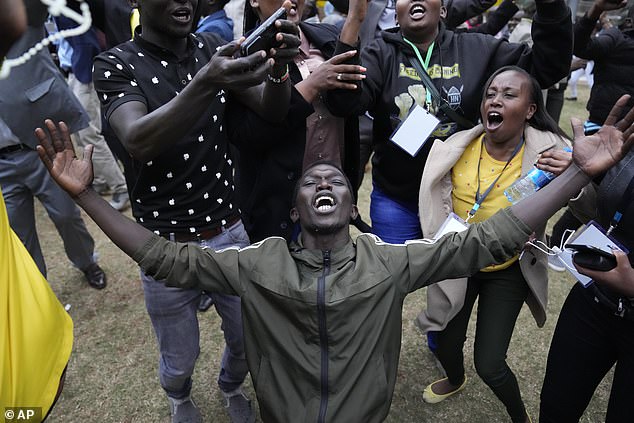 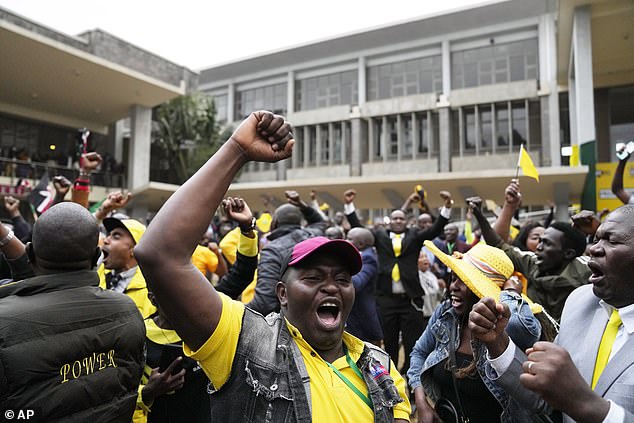 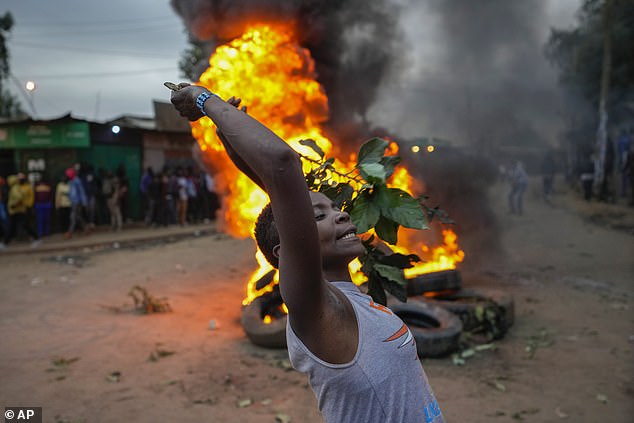 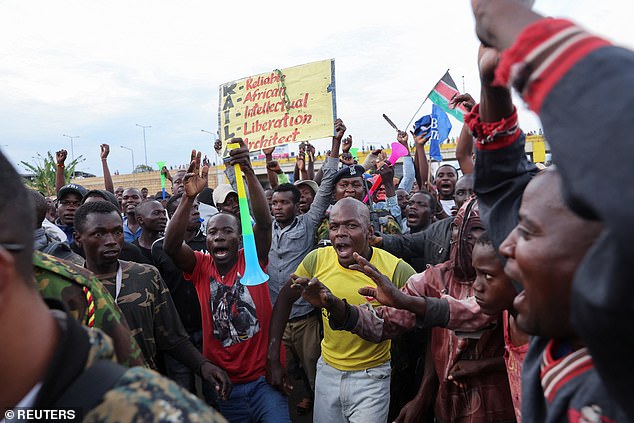 ‘I will run a transparent, open and democratic government,’ he says.

‘I want to promise all the people of Kenya – whichever way they voted – that this will be their government.

‘I want to tell them [opponents] that they have nothing to fear – there is no room for vengeance. I am acutely aware that our country is at a stage where we need all hands on deck to move it forward.’

And he praised the election commission, regardless of the fact that three of its members had stated they were unable to verify the results.

The declaration of Mr Ruto’s victory triggered violence and riots among supporters of Mr Odinga, who burned tyres and declared ‘No Raila, no peace.’

Kenya has a history of post-poll violence and slow progress by the electoral commission in tallying Tuesday’s vote has fed fears the election will be disputed, leading to bloody scenes like those that followed presidential polls in 2007 and 2017.

Mr Odinga has seven days to challenge Mr Ruto’s victory in court, if he so chooses to dispute the election.

International recognition has already flooded in, with Zimbabwean President Emmerson Mnangagwa congratulating Mr Ruto and saying he had ‘no doubt he will serve his country, his people and our continent with distinction.’