A Labour frontbencher was accused of stirring up division after posing in a T-shirt that claimed she had ‘never kissed a Tory’.

Lucy Powell, the party’s culture spokesman, was told to ‘grow up’ after she was pictured wearing the T-shirt at the Manchester Pride parade this weekend.

But Labour allies suggested the row over the T-shirt, which has become popular in some Left-wing circles, was an attempt to distract people from the cost of living crisis.

Chris Clarkson, the Tory MP for Heywood and Middleton, said of the shirt: ‘Puerile, divisive and completely against the spirit of inclusion that Pride is supposed to embody. Grow up.’ 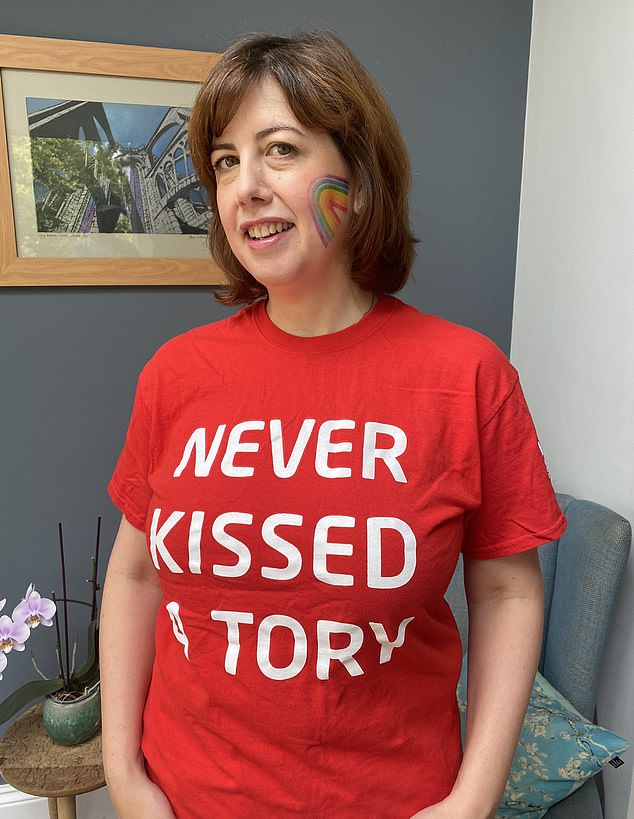 Sara Britcliffe, for Hyndburn and Haslingden, added: ‘This is the problem. Creating an us v them. Quite disgusting from a shadow minister.

‘A difference of political belief should not result in hate.’

A source close to Mrs Powell said last night: ‘Whilst the Conservatives are fixating over a T-shirt worn to a Pride event in Manchester this weekend – a T-shirt worn by Labour at all Prides for over a decade to much cheer from the crowds – millions of families and pensioners are worried sick about how they will pay their energy bills this winter.

‘Conservative MPs should get off Twitter and get on the blower to the continuity Conservative leadership candidates and tell them to adopt Labour’s plan to freeze energy bills and save families £1,000.’

It came as fellow Labour MP Christian Wakeford – who crossed the floor from the Conservative side earlier this year –denied wearing the same shirt.

He said: ‘I’ve always been a proud ally of those who are LGBT regardless of political parties so turn it in and have a lie down.’