Bubbles, a chimpanzee previously owned by Michael Jackson, has been secured inside a Florida ape sanctuary ahead of Hurricane Ian.

The Center for Great Apes in Wauchula, Florida, has boarded up and placed sandbags in and around the buildings at its facility, which has housed Bubbles since 2005.

Additional accommodations for Bubbles, 39, and the estimated 70 other apes at the facility include hammocks and pre-prepared meals stored inside the now-barricaded buildings.

‘With the most recent track, it looks like the storm is coming for a visit to the sanctuary!!!’ wrote Patti Ragan, the center’s director, in a Facebook post.

‘All the apes and their caregivers will be hunkered down safely inside the night houses with all their food and supplies tonight into tomorrow.

‘The maintenance team has boarded up all the offices and homes, sandbags have been placed in the areas prone to flooding, supplies have been purchased, and our caregivers have prepared the apes’ night houses, diets, and special enrichment during the storm.

‘They are heated in the winter and strong enough to withstand Florida hurricanes,’ 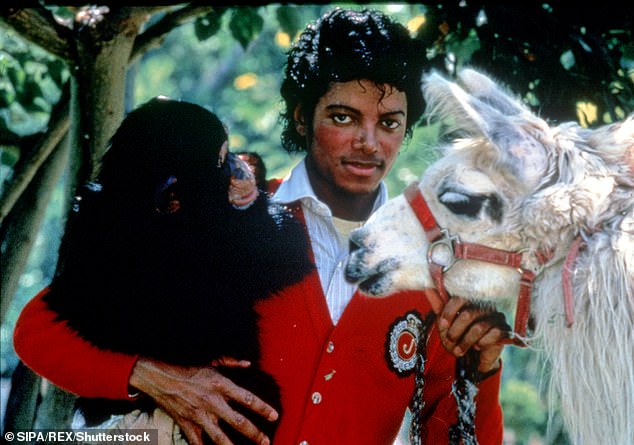 Bubbles (left), 39, was given to Michael Jackson by a Hollywood trainer in 1986 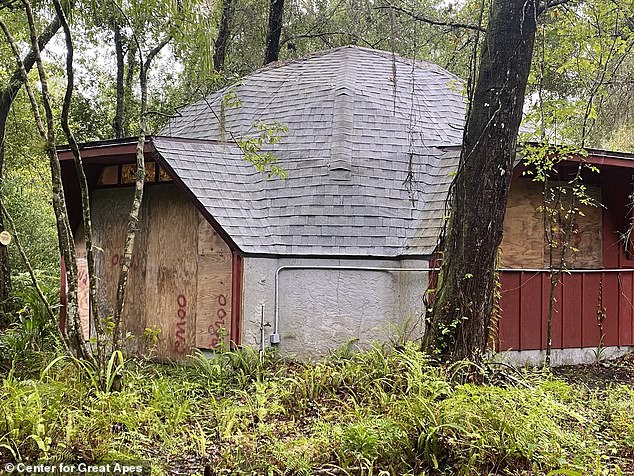 The Center for Great Apes, which has housed Bubbles since 2005, has prepared for Hurricane Ian by boarding up each of the buildings at its facility 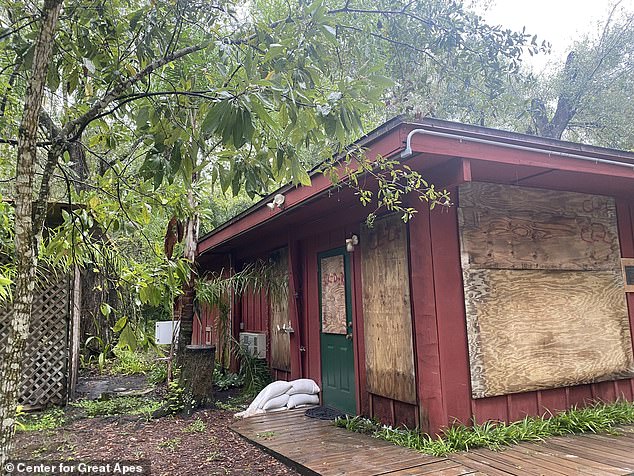 All the buildings are equipped with hammocks and pre-prepared food, among other supplies 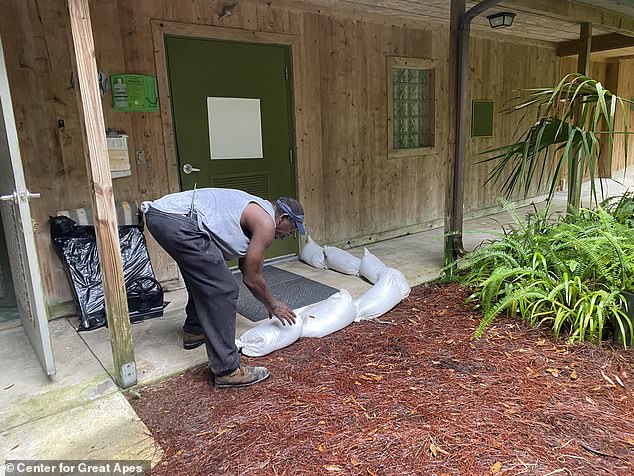 ‘We’ve been through this a half-dozen times before and we know we will get through this one,’ said Patti Ragan, the center’s director

The center houses Bubbles and other apes, like Oopsie, Murray, Mowgli and Bo, in a 100-acre space where the apes are able to roam freely.

Ragan assured the public that the center would be fine ahead of the now-Category 4 storm.

‘We’ve been through this a half-dozen times before and we know we will get through this one,’ she said. ‘We will update you with more details as soon as we can.’

Other Florida-based animal rescue organizations are also bulking up for the storm, including Carole Baskin’s Big Cat Rescue in Tampa.

‘I want to give a huge shout-out to everybody at Big Cat Rescue who has been filling sandbags, and picking up sticks, and chain-sawing away (tree) limbs and covering the windows,’ Baskin said. 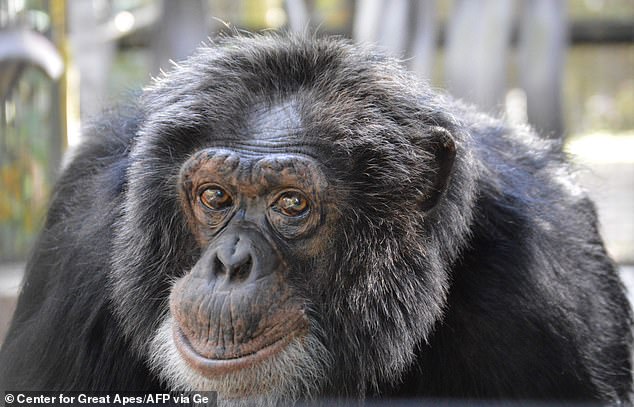 Bubbles is joined by an estimated 70 other apes at the Wauchula, Florida facility 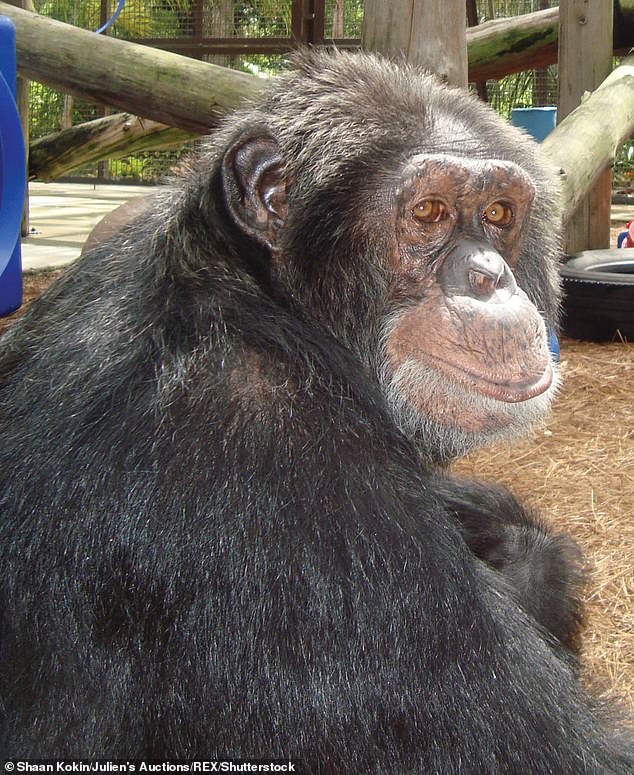 ‘Bubbles enjoys quiet moments and painting,’ according to the center’s website 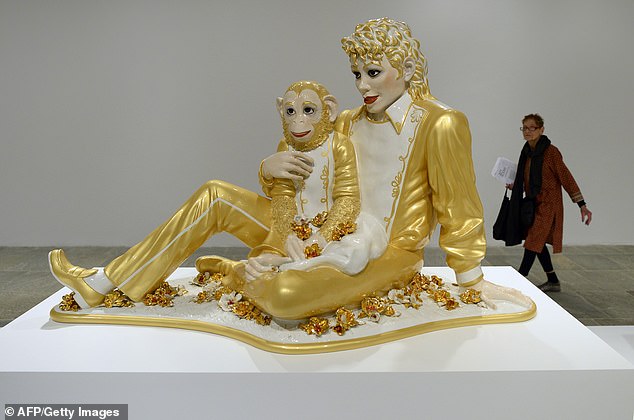 ‘Michael Jackson and Bubbles,’ by Jeff Koons at the Whitney in 2014

Bubbles was born in 1983 and was given to Jackson by a Hollywood trainer in 1986.

He is immortalized by a 1988 Jeff Koons sculpture, which depicts Bubbles sitting on Jackson’s lap in porcelain and gold leaf.

In 2005, Bubbles made his way to the Florida facility after being deemed ‘too aggressive’ to live at Jackson’s home.

The center lists Bubbles as a ‘physically imposing 185-pound, 4-and-a-half foot adult male’ who is ‘now treated as the dominant male in his group of chimpanzees that includes his best friends, Ripley and Oopsie.’

‘Bubbles enjoys quiet moments and painting,’ according to the website.

The website adds that ‘Bubbles will occasionally spit water or throw sand (with amazing accuracy) at strangers just to see how they react.’

Despite Jackson’s death, his estate continues to support Bubbles’s annual care costs at the sanctuary. 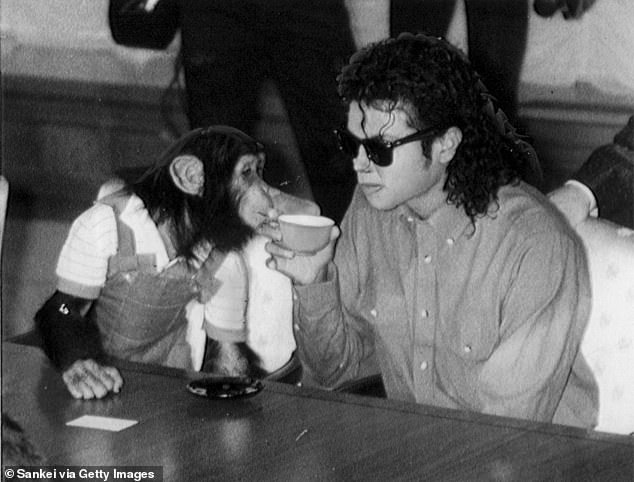 Pictured: Michael Jackson sipping tea as he and Bubbles meet the mayor of Osaka, Japan