'Nepo babies' in Hollywood: What do famous families say about industry equity?

In Hollywood, it all runs in the family.

With the emergence of stars like “Euphoria’s”Maude Apatow and “The Gilded Age” actress Louisa Jacobson, conversation surrounding “nepo babies” has become trendy on social media as fans uncover that their favorite breakout stars have celebrity lineages.

“Nepo babies,” short for nepotism or the practice of favoring friends and family for jobs, has gained traction among social media users as they’ve used the term with both fascination and repulsion after learning up-and-coming stars might’ve had a helping hand in entering show business.

Apatow, 24, said in a Porter interview published in September that at first, she found the “nepo baby” label “sad” because people were judging her outside of her talent.

“I try not to let it get to me because I obviously understand that I’m in such a lucky position. A lot of people (in a similar position) have proven themselves over the years, so I’ve got to keep going and make good work,” she said. “It’s so early in my career, I don’t have much to show yet, but hopefully one day I’ll be really proud of the stuff I’ve done by myself.”

She also shared her father Judd Apatow “always reads what I write, but I have to be at a certain point. I’ll wait until I’m almost done and then get notes from him. I get annoyed because he’ll come up with a better idea, but he’s super-helpful. So is my mom.” 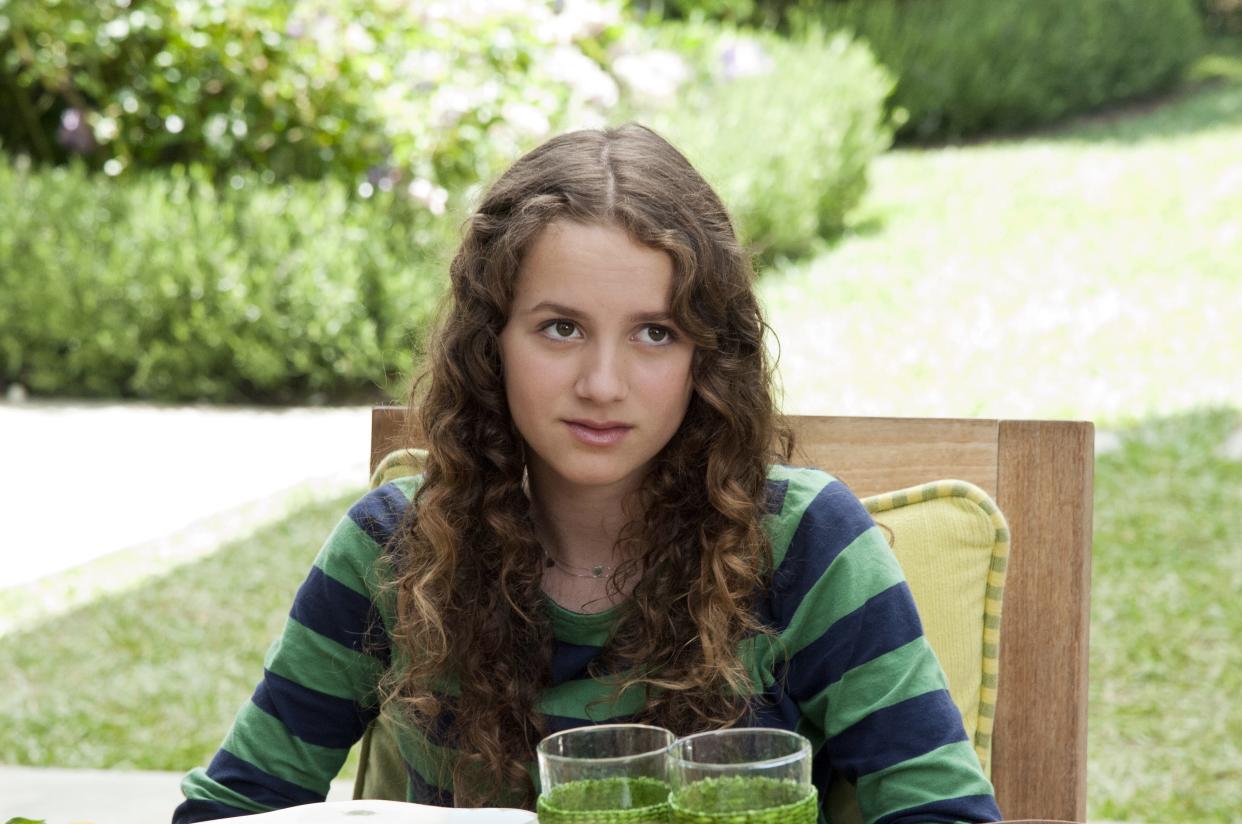 Getting advice from an Emmy-winning director is an advantage of being a child of Hollywood parents. Just as it seems like the luck of the draw for an actress like Jacobson, the daughter of Oscar-winning actress Meryl Streep, to land her first major IMDb credit in an HBO series starring alongside Tony-nominated actress Denée Benton and bona fide TV stars including Christine Baranski (“The Good Wife”) and Cynthia Nixon (“Sex and the City”). 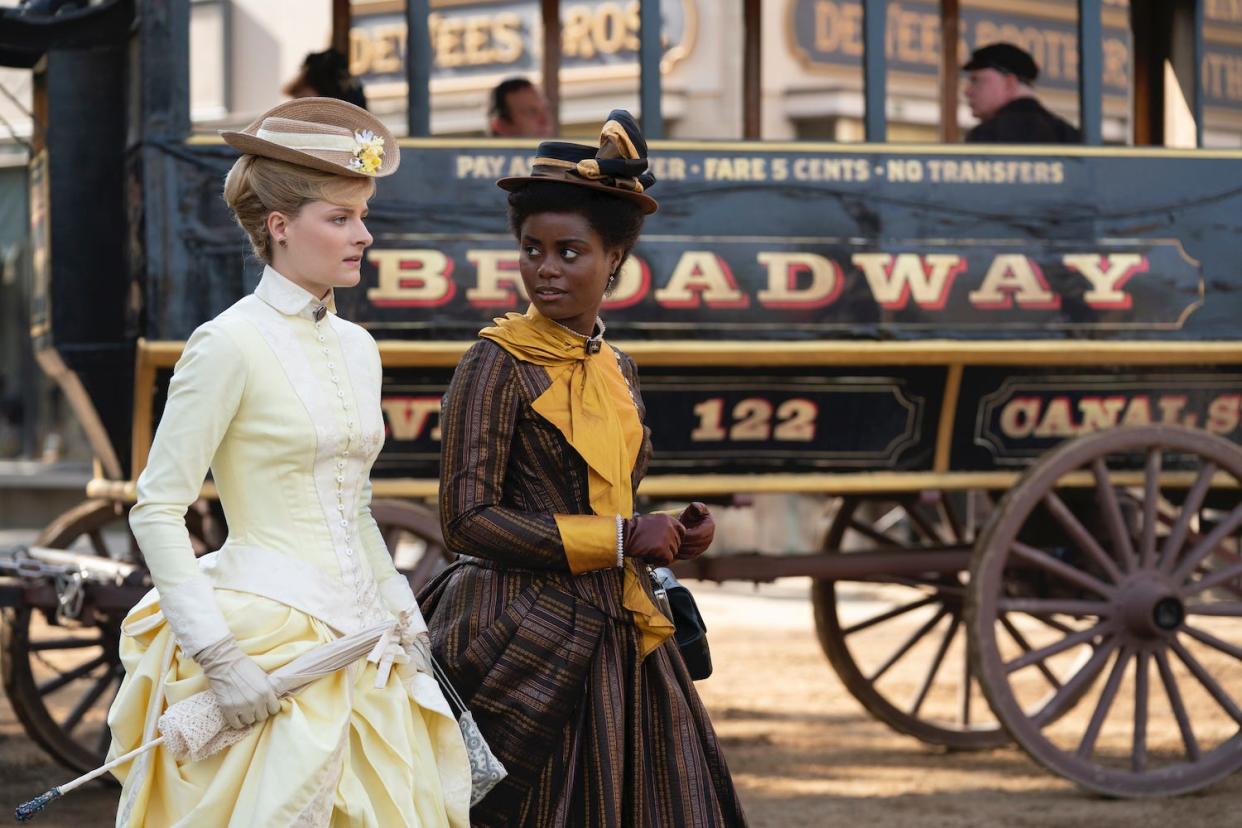 But according to industry insiders, it’s not rare at all.

“It’s so common in the industry,” says casting director Danielle Demchick, who is also vice president of advocacy for the Casting Society of America. “It doesn’t even resonate (to me) as a trend.” 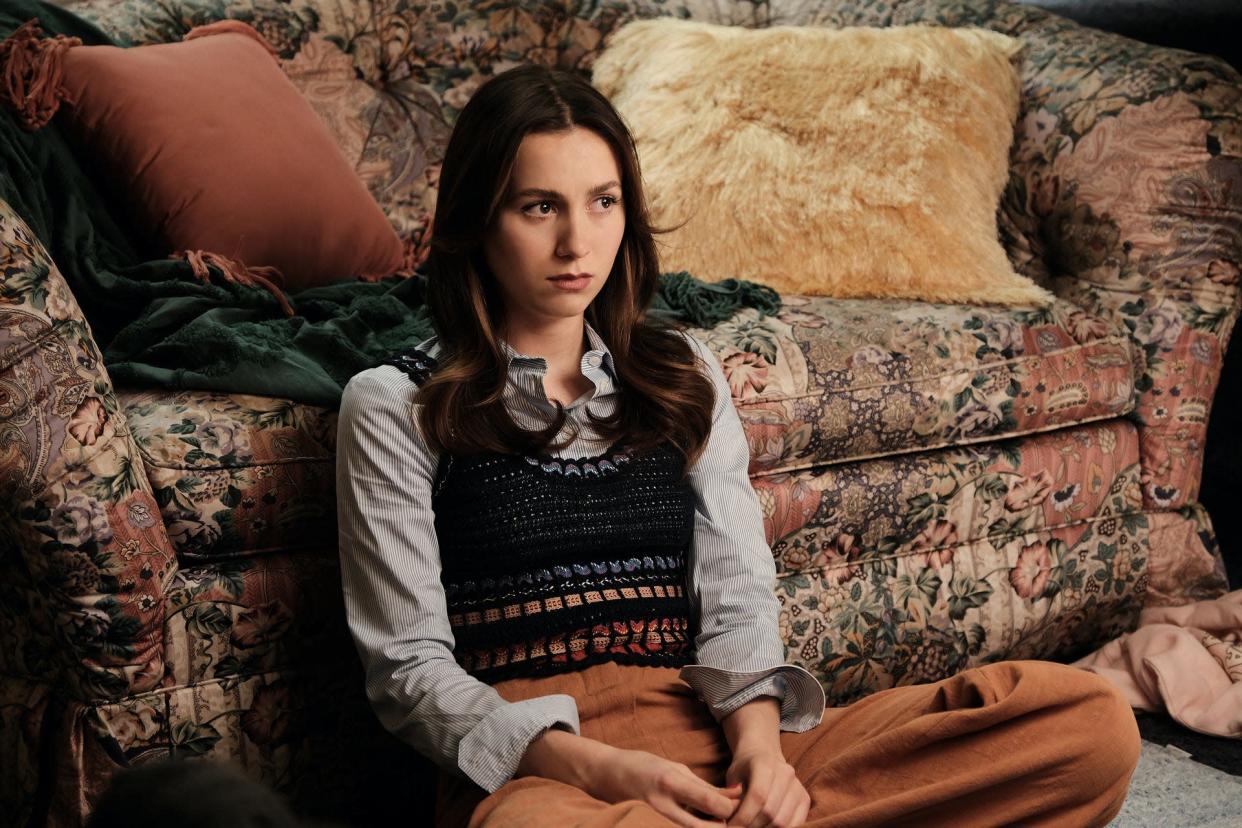 Is stardom genetic? Or an opportunity pipeline?

“There’s definitely a lot of anecdotal evidence that shows that someone usually has an aptitude for a talent that their parents or grandparent had,” Fulton says, who’s been featured on PBS’ “Finding Your Roots” web series spinoff “Finding Your Roots: The Seedlings.”

What’s also “at stake,” Fulton adds, is that celebrity children have the opportunity to be connected with the right training and have access to get their auditions in the right hands.

“I think a lot of kids in this business are really good actors, and that’s why they’re booking things. … They also do have the opportunity to be in the right place at the right time. And that’s a huge part of it,” Demchick agrees.

“Maude discovered how to act this time,” Apatow’s actress mother Leslie Mann told USA TODAY in 2012 when the then 14-year-old starred alongside her mom in dad Apatow’s movie “This is 40.” “It was really fun watching her do that. It was amazing. I cried.”

Gwyneth Paltrow, who is the child of “St. Elsewhere” producer Bruce Paltrow and Emmy-winning actress Blythe Danner, agreed that children of famous parents have “access other people don’t have” during an episode of Hailey Bieber’s “Who’s in my Bathroom” YouTube series. However, she said there’s also a burden that comes with a famous family.

“I really do feel that once your foot is in the door, which you unfairly got in, then you almost have to work twice as hard and be twice as good,” Paltrow said. “Because people are ready to pullyou down and say ‘You don’t belong there’ or ‘You are only there because of your dad or your mom.'”

But Leah Daniels-Butler, who has been a casting director for decades and worked on films including “2 Fast 2 Furious” (2003) and “The Butler” (2013), says sometimes talent doesn’t always pass to the next generation.

“There are instances where you have some actors who fall into their family’s or their parent’s footsteps and they’re very good,” Daniels-Butler says. “And then you have some that … Listen, everybody has talent. Some people just have to work a little harder.”

The list of “nepo babies” who have parents with household names is long and spans for many generations.

Oscar-nominated actress Kate Hudson is the daughter of Oscar-winning actress Goldie Hawn. For a triple-generation example, you have Tippi Hedren, who earned a Golden Globe for “The Birds” and birthed “Working Girl” Golden Globe winner Melanie Griffith, who is the mother of “Fifty Shades” actress Dakota Johnson and actress and model Stella Banderas (whose father is Antonio Banderas).

“The Batman” actress Zoë Kravitz has “The Cosby Show” alum Lisa Bonet for a mom (plus actor Jason Momoa for a stepdad) and musician Lenny Kravitz for a dad. The “Are You Gonna Go My Way” singer had TV actress Roxie Roker and TV producer Sy Kravitz for parents.

Drew Barrymore, who starred in “E.T” when she was 7, comes from a long line of actors on her dad’s side. Drew’s father John Drew Barrymore starred in movies and TV throughout the 1950s and ’60s. And his dad? John Barrymore, an actor in the early 20th century.

Many stars get their first credit while working alongside their parents, like John David Washington, who was just a kid with dad Denzel Washington on screen in Spike Lee’s “Malcolm X” (1992) and “Devil in a Blue Dress” (1995). 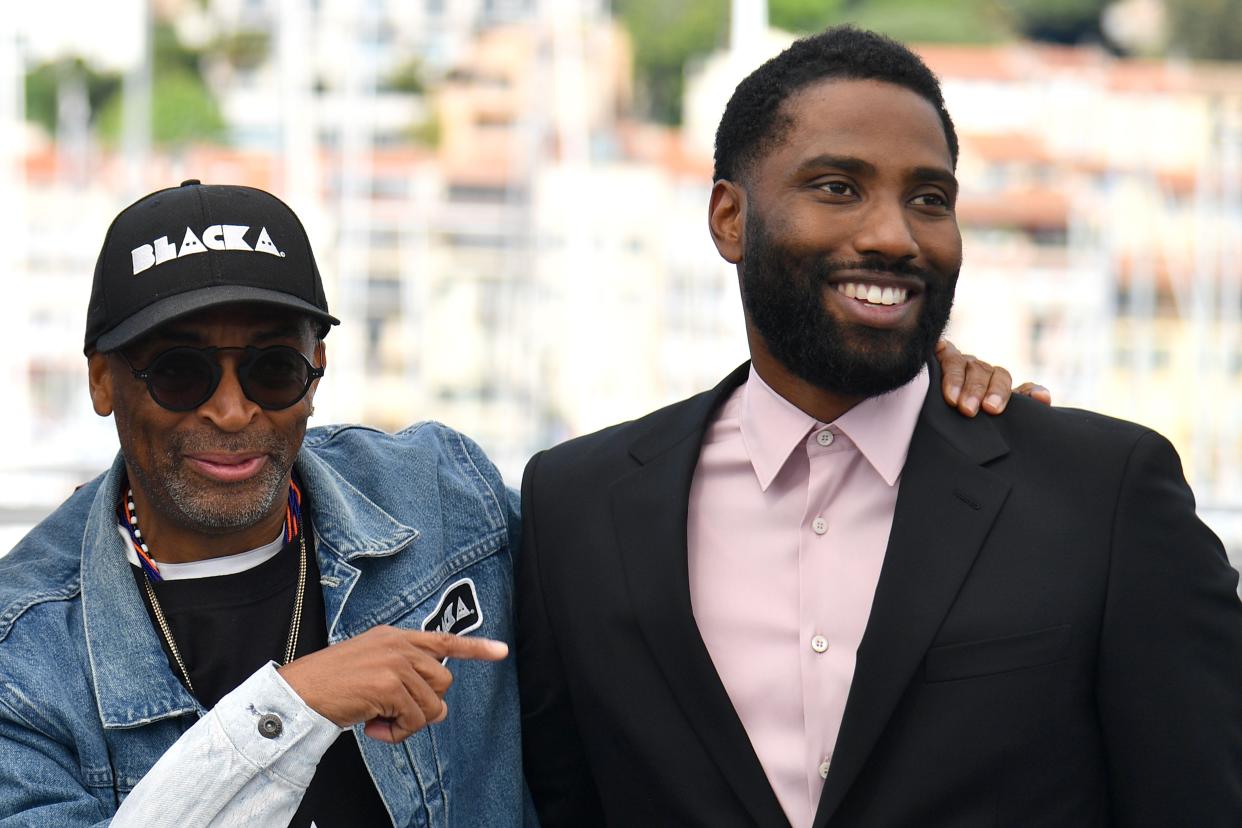 Fast forward to 2018 Spike Lee leaned on the younger Washington to lead his movie “BlacKkKlansman.” Before his career took off, Washington had a hard time embracing his legacy and said “people changed” when they discovered he was the son of Denzel Washington.

“I used to lie, saying he was a construction worker or in jail, just to have some sense of normalcy. I felt like there was no way people would take me seriously, even if I was good,” Washington said in an August 2020 Mr. Porter interview.

Nicolas Cage’s grandfather Carmine Coppola was an Oscar-winning composer for the score of “The Godfather” movies. Cage’s uncle Francis Ford Coppola is the Oscar-winning “Godfather” director and his aunt Talia Shire starred in the film. 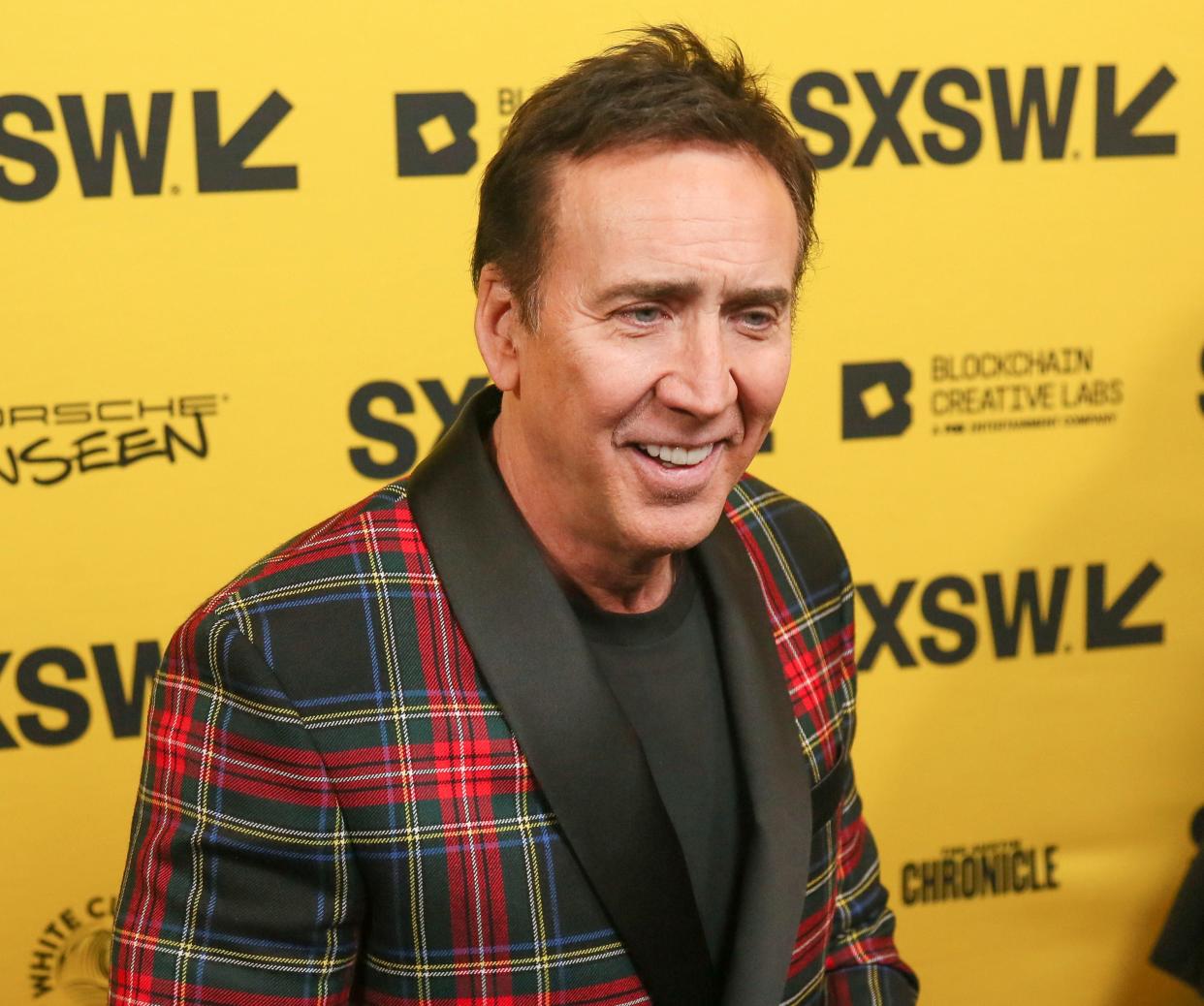 Cage was born Nicolas Kim Coppola, but he opted out of the family name and decided to go by Cage after being inspired by Marvel superhero Luke Cage and composer John Cage. Cage said in his GQ April cover story the change was to prove “that I had something, and it wasn’t simply because I was born into a Coppola family. It was because I thought I had a unique way of feeling things and looking at things.”

More: Nicolas Cage joined ‘Unbearable Weight of Massive Talent’ ‘because it scared the crap out of me’

Daniels-Butler, whose brother is the film and TV-maker Lee Daniels, says she’s never had to fight against nepotism claims. In fact, she feels like having family in the industry motivates her “show up with 110%.”

“I’m going to work harder than anyone,” says Daniels-Butler, who cast roles for her brother’s films “Precious” and “The United States vs. Billie Holiday.” “I have to prove myself, especially if I’m working with my brother.”

On Twitter, star watchers consider the “best nepo babies” to be those who lead successful careers while keeping knowledge of their notable relatives at bay, noting how Tracee Ellis Ross has a famous acting career independent of her mother Diana Ross’ singing career.

There are even some “nepo baby” models who have been part of the Twitter conversation, including Bella and Gigi Hadid who are the daughters of former model Yolanda Hadid and real estate developer Mohamed Hadid.

nepo babies can’t be supermodels imo. they wasn’t sleeping on bunk beds in apartments with 8 other models! no hunger in their strut! https://t.co/DlQGuf4a9p

‘I was the uglier sister’: Bella Hadid admits she got a nose job, opens up about insecurities

Demchick says a celebrity’s choice to embrace or distance their Hollywood connections is “case by case.”

Elizabeth Olsen of Marvel hero fame says she grappled with the concept of nepotism when she was a kid watching her twin sisters Mary-Kate and Ashley Olsen shine in Hollywood.

“I guess I understood what nepotism was like inherently as a 10-year-old. I don’t know if I knew the word, but there is some sort of association of not earning something that I think bothered me,” Olsen told Glamour in April 2021. “I don’t know how much I processed, but I did think, ‘I’m going to be Elizabeth Chase (her middle name) when I become an actress.’ “

“Elizabeth Olsen didn’t just magically end up in a casting room, she obviously had family connections,” Demchick says. “But I think we can all look at her career and say, she is a great actor, and should be working.”

Daniels-Butler says nepotism hires exist, and if they happen “that person should be qualified.”

How can Hollywood level the playing field?

Before an actor is selected for a role there are many layers of approval,which consist of submitting audition tapes and impressingcasting directors, producers, directors and studio executives.

Something Demchick says could balance the perceived nepotism in Hollywood is to better diversify the decision makers in the industry.

Daniels-Butler says she’s “experienced more” Black and brown people in storytelling and filmmaking seats since beginning her career in the ’90s, but there’s still improvement to be made.

According to UCLA’s “Hollywood Diversity Report 2021: Pandemic in Progress,” people of color and female writers and directors remain underrepresented by about two-to-one compared to their presence in the population.

“I know that people only are looking at who’s on camera. But in order to change the industry we need to be changing that we have more directors of all identities and walks of life,” she says. “We (need to) have more writers, costume designers, hair and makeup artists. … It’s a full ecosystem.”