Taipei: Panicked shoppers battled with security staff at an Ikea outlet in China after the store was placed on a sudden COVID lockdown.

Health officials were attempting to restrain customers who rushed for the exit of the homeware store in Shanghai on Saturday, after it emerged a visitor had been in close contact with a coronavirus patient.

Videos circulating on social media showed security guards trying to hold a pair of doors shut, but crowds pushed through and escaped. 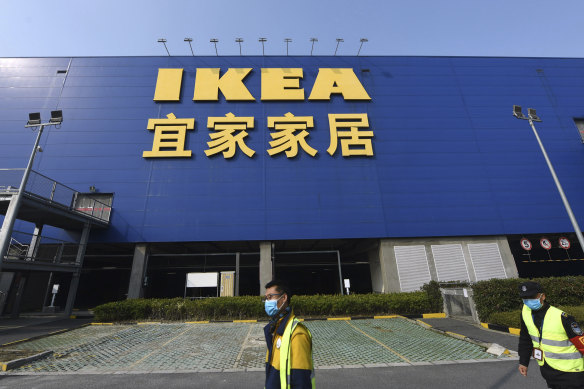 An IKEA store in Hangzhou in eastern China’s Zhejiang Province.Credit:AP

Those who could not get out were sealed inside the Ikea store in the Xuhui district for several hours until they were transferred to quarantine hotels, according to visitors who posted about their experience on Douyin, the Chinese version of TikTok.

The incident is the latest in a series of chaotic flash lockdowns enforced in recent weeks in China – one of the last countries in the world to still adhere to a zero-COVID policy.

Residents in various provinces have, without warning, found themselves held in places such as beach resorts, gyms and hotpot restaurants.

Some have sought to escape by scaling fences, sprinting down beaches and pouring out of office buildings.

Shanghai, one of China’s wealthiest and most cosmopolitan cities, has been the site of some of its most traumatic COVID curbs.

Its 25 million residents experienced a severe two-month lockdown earlier this year amid food shortages and occasional clashes with authorities.

The Ikea store’s sudden shutdown was ordered because one of the visitors had been a close contact of a six-year-old boy who tested positive for COVID after returning to Shanghai from Lhasa in Tibet, the site of one of China’s biggest COVID outbreaks, according to the Shanghai health commission.

A spokesman added that those who were at the store and surrounding areas must quarantine for two days followed by five days of health monitoring.