Portland supermarket worker gets his hand stuck in a MEAT TENDERIZER

An unlucky employee at a Portland grocery store had his own Halloween horror when his hand got stuck in a meat tenderizer on Thursday, prompting firefighters to use an angle grinder to cut open the machine in order to free his hand.

The unidentified victim was pictured with his right hand stuck in the machine, and a press release from Portland Fire and Safety said the victim had four fingers trapped up to the second knuckle.

One picture of the situation shows firefighters and other officials surrounding the employee with some wearing safety glasses. 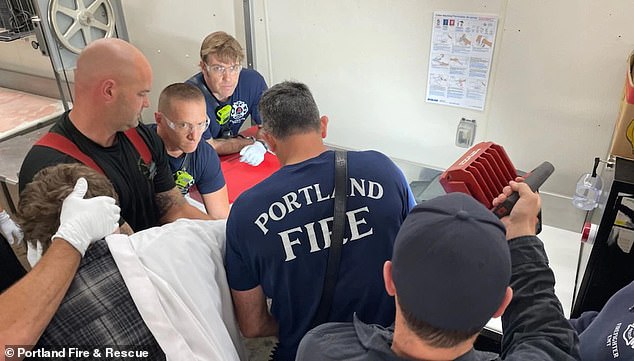 The victim, who appears to work at a Safeway grocery store, got his hand caught in the meat tenderizer on Thursday and had to be freed by firefighters 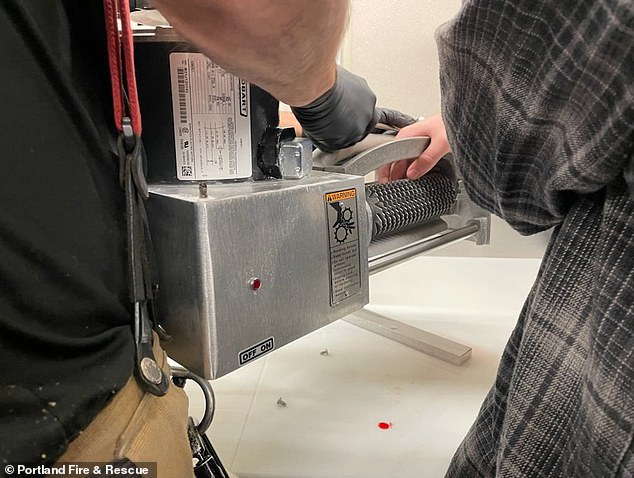 According to authorities, the victim had four fingers trapped, all up to the second knuckle, and a picture shows the vicious-looking machine

A first responder holds the victim’s head as the others work to figure out how to release his hand.

A second picture shows a close-up of the meat grinder and the mans hand, but shows minimal blood.

Personnel from Portland Fire and Safety used an angle grinder to make a relief cut in the meat tenderizer, helping them to pry it open and release the victim’s hand.

A press release from the agency says the victim was then transported to a trauma center at Oregon Health and Science University, which is based in Portland.

Although the meat tenderizer incident does not appear to have been Halloween related, it happened at a time of the year notorious for freak accidents.