Come to watch the match? Yule be disappointed… Pub which doesn’t show football keeps having to turn away England fans who mistake its Christmas bow decorations for a St George’s flag

A pub that doesn’t show football matches was forced to turn away England fans who mistook its Christmas decorations for a St George’s flag.

Three Lions fans have been turning up at the The Greyhound Inn in Wiltshire to watch the World Cup games – only to be disappointed that they are not being shown.

Fans thought the pub, which put up its holiday décor on Sunday, had been wrapped in a giant red cross to show support for team.

But Greyhound landlady Nikki McNulty, 39, claims she is known by locals for her decadent displays and has been nicknamed the ‘Crazy Christmas Lady.’

Mrs McNulty acknowledged that she can see why punters think the bow looks like the England flag and called the mix-up ‘quite funny.’ 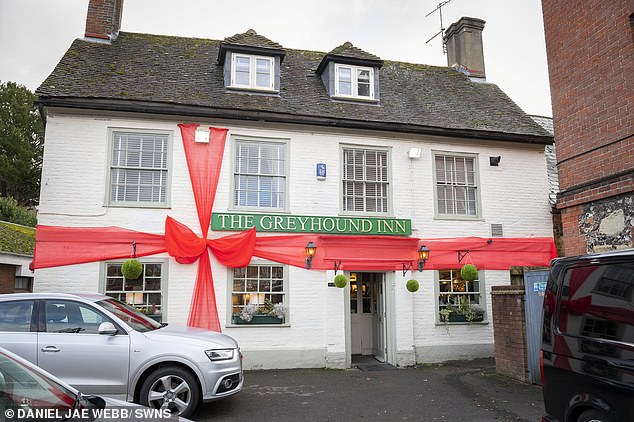 The Greyhound Inn in Wiltshire, which doesn’t show football matches, was forced to turn away England fans who mistook its Christmas decorations for a St George’s flag

Mrs McNulty put up Christmas decorations over the weekend with her husband Graeme and pub staff – whilst enjoying a glass of mulled wine or two.

Each year she creates a new design for her décor, which she tries to put up as soon as festive season begins.

‘They all call me the Crazy Christmas Lady around here; as soon as November hits I want to put everything up and make everything really festive’, she said.

‘So I thought this year I’ll make the pub look like a giant present – well, that was the plan.

‘The next day it’s all over Facebook and all over the local community group chat saying ‘oh how lovely is it that The Greyhound are supporting the football’ so we had to politely say we won’t be showing the football.’ 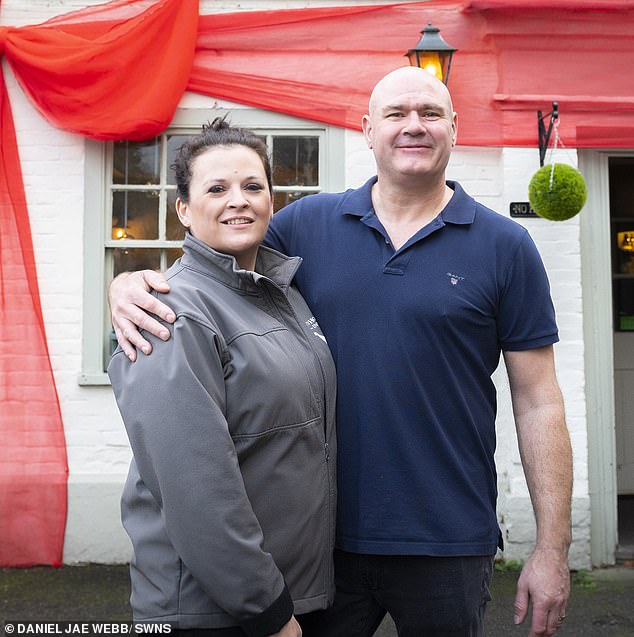 Greyhound landlady Nikki McNulty, 39, (pictured with her husband Graeme) claims she is known by locals for her decadent displays and has been nicknamed the ‘Crazy Christmas Lady’

Mrs McNulty said about a dozen people come in asking about watching the football, but ‘we’ve had to turn them away.’

‘I think it’s quite funny now, looking back. First of all I was thinking ‘oh goodness, how can I make it look more like my vision was,’ she recalled.

‘I can see why they’d think that [it looks like the England flag], but it’s made everyone have a little giggle which is what everybody needs at the moment when times are so tricky.

‘I think it’s brightened up the Market Square with all the bad weather.’

She said the pub is restaurant-orientated nowadays and the only people watching the World Cup are the kitchen staff who are allowed to stream it on their phones during less busy periods.