Queen’s funeral seating plan: Meghan & Prince Harry will sit behind King Charles and William and Kate will be opposite | The Sun

MEGHAN Markle and Prince Harry will sit behind King Charles during the Queen's funeral today.

The Royal Family will unite in grief as the poignant service for Her Majesty begins at 11am. 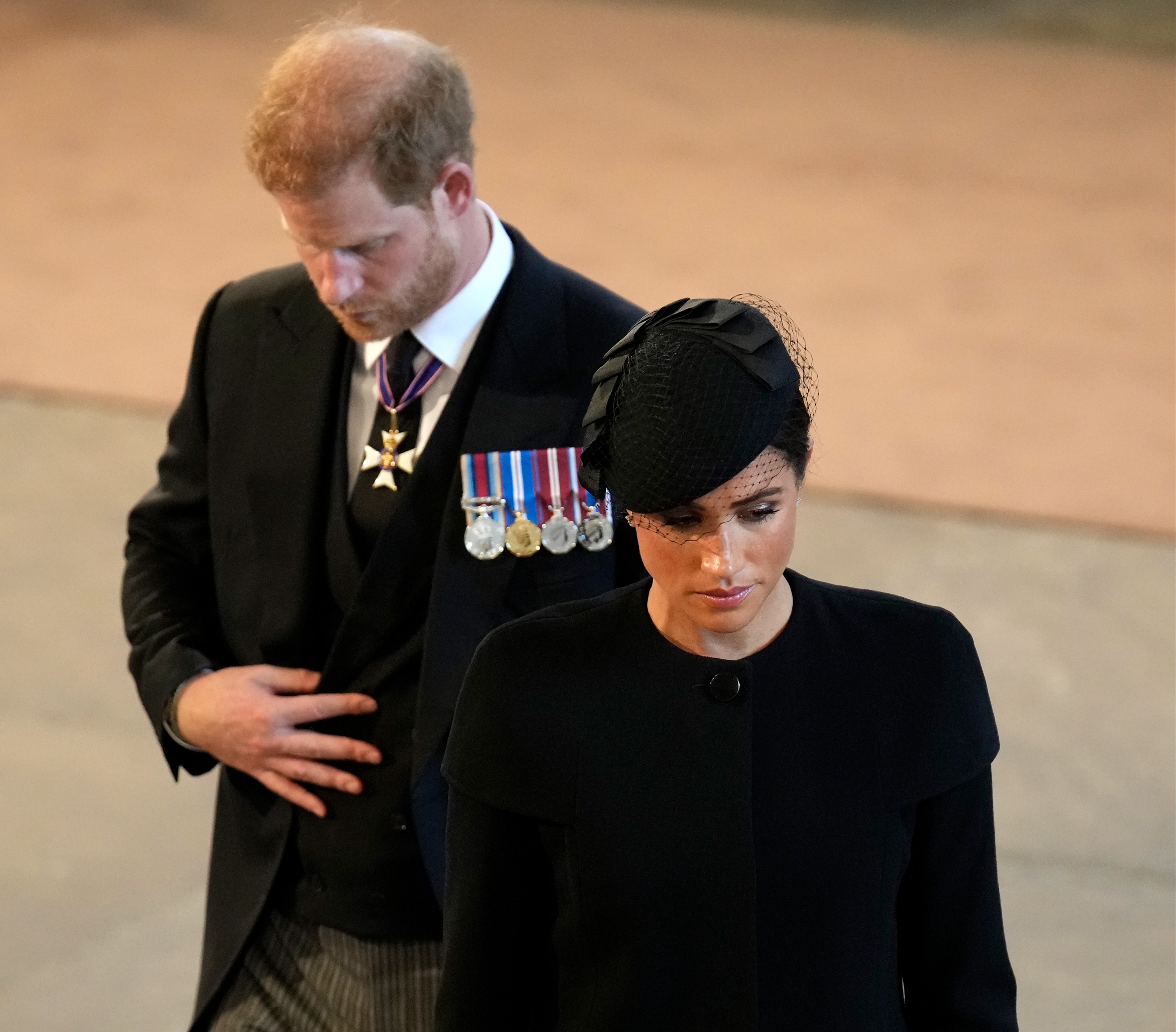 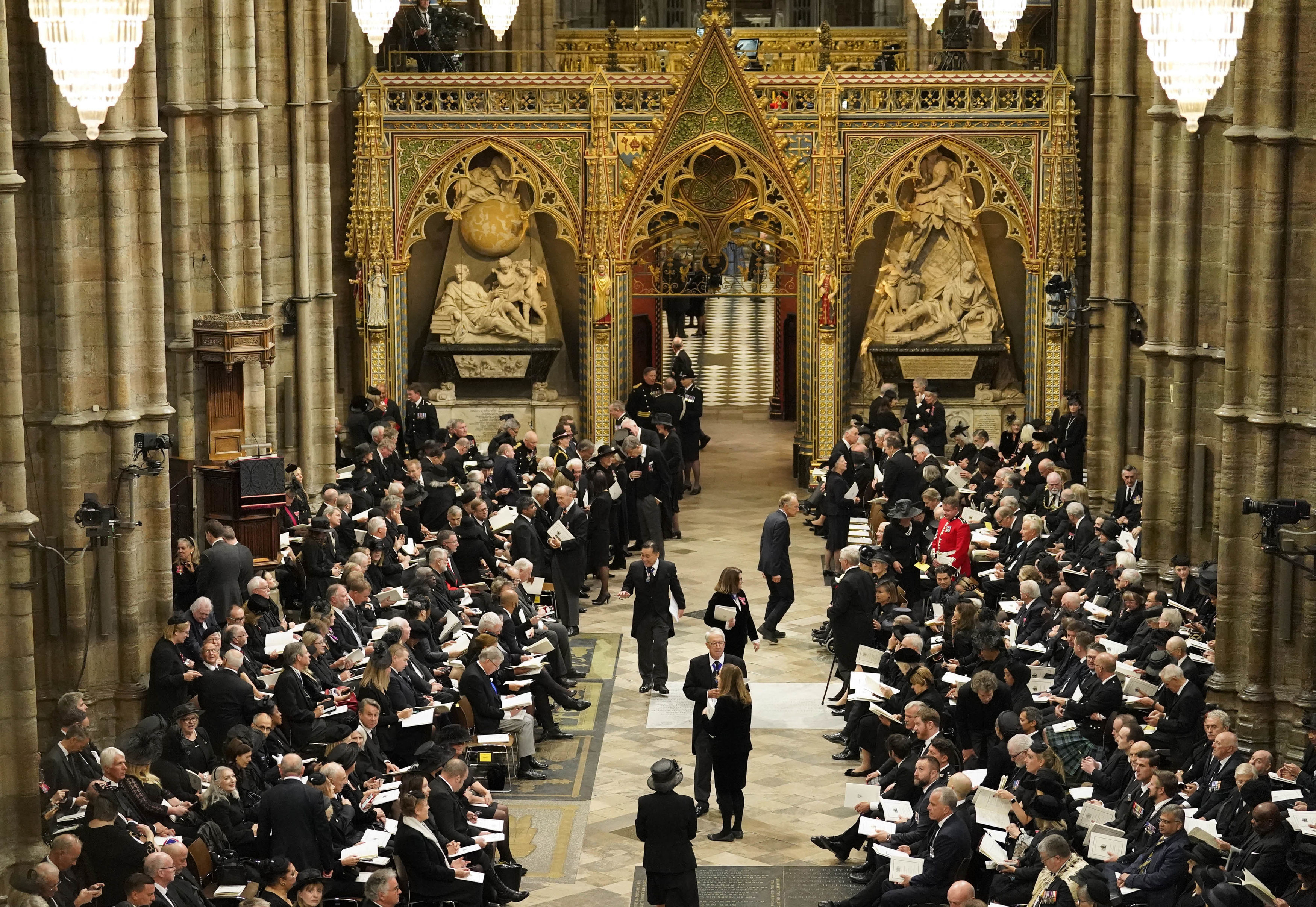 The King and Queen Consort will sit in the ornate Canada Club chairs, with Camilla next to the Princess Royal and Vice Admiral Sir Timothy Laurence.

Beside them in the front row of the south lantern will be the Queen's other two children, Prince Andrew, the Duke of York, and Prince Edward, the Earl and Countess of Wessex.

Across the aisle will be the Prince of Wales, the Princess of Wales, Prince George and Princess Charlotte, along with Peter Phillips and Zara and Mike Tindall.

The Duke and Duchess of Sussex will sit directly behind the King, with Meghan sitting beside Princess Beatrice.

Read More on the Queen’s Death 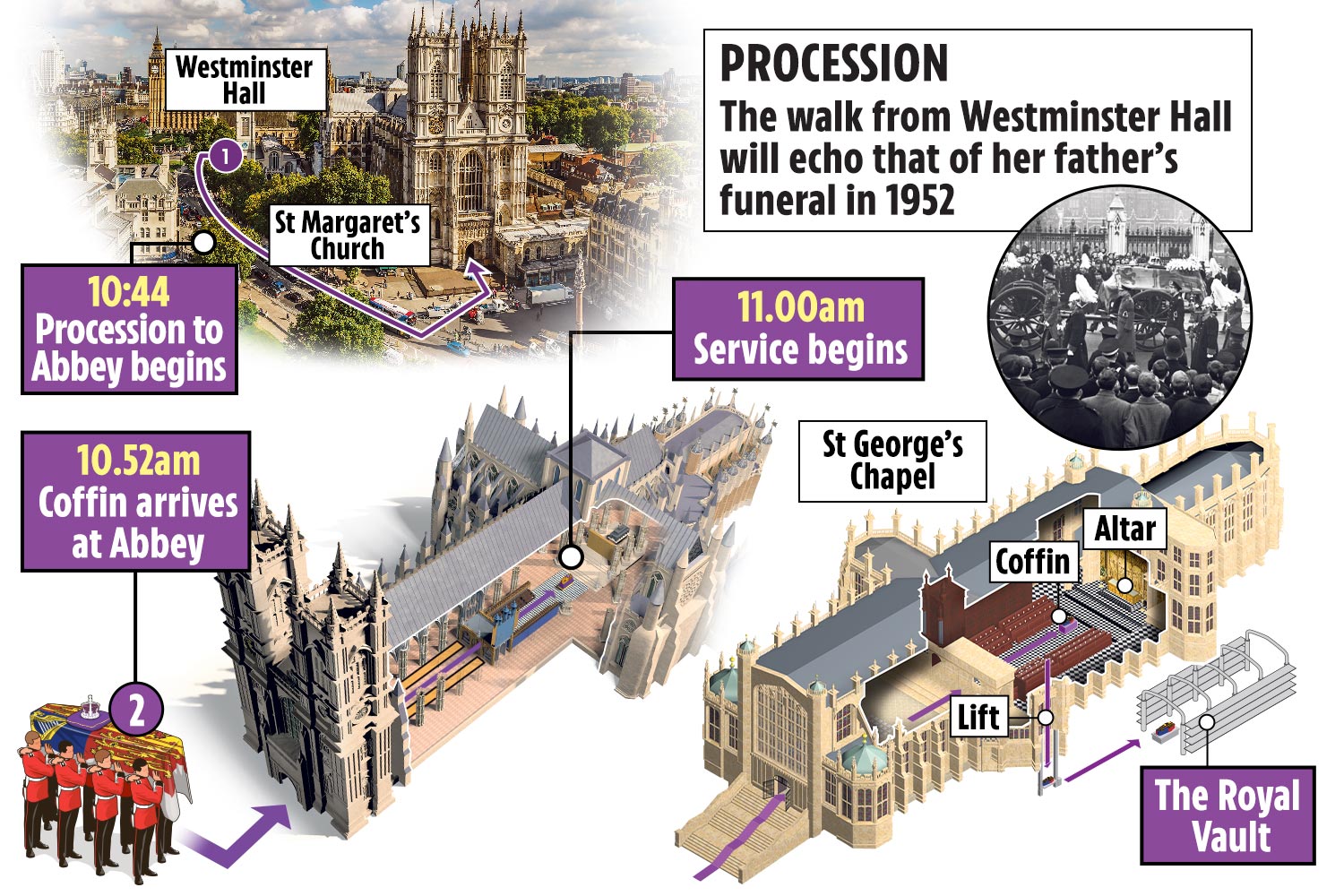 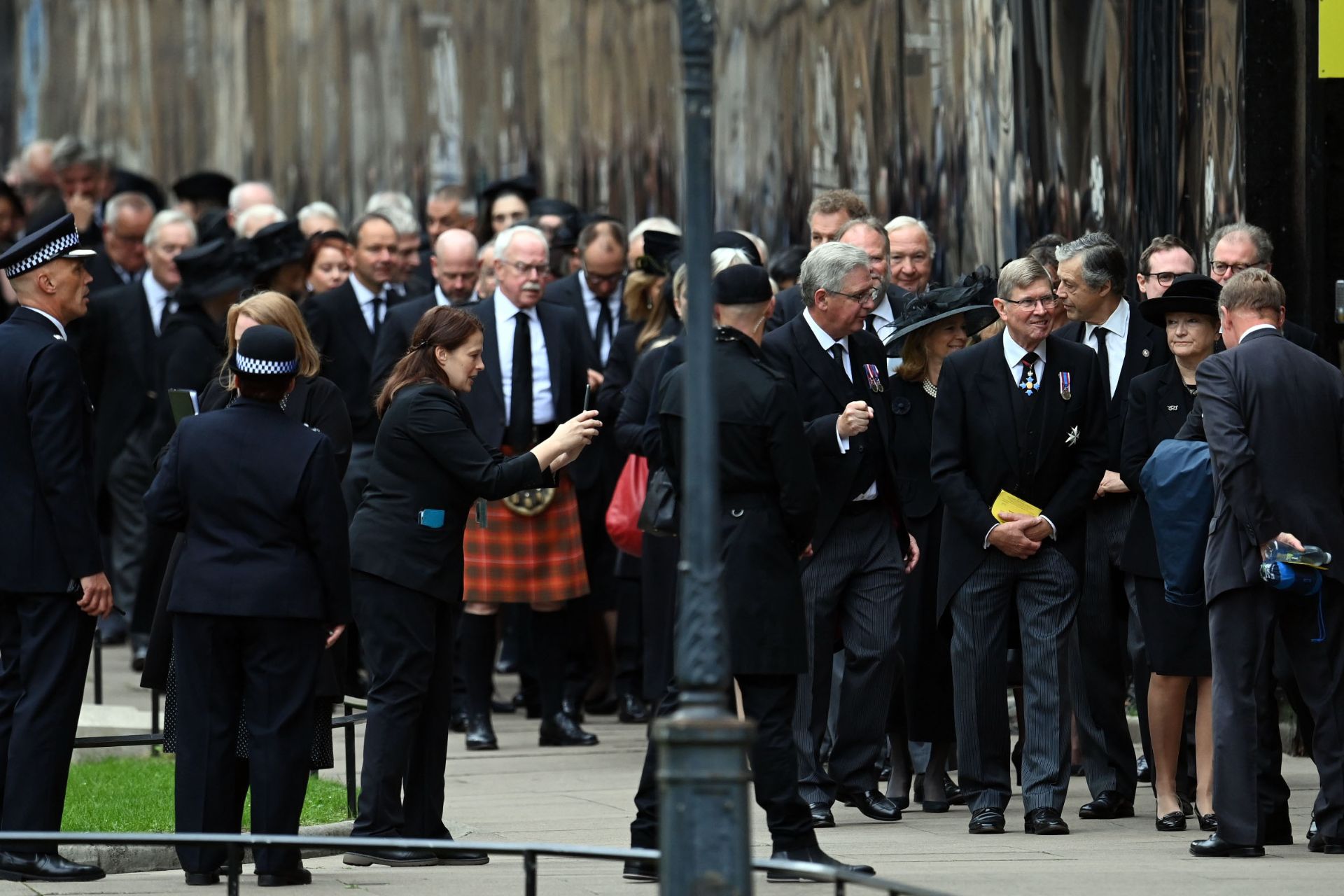 World leaders and foreign royals began gathering at Westminster Abbey this morning to join a congregation of 2,000.

Tom Parker Bowles, the Queen Consort's son, was among the first to arrive, alongside other members of their family.

He is joined by King Philippe of Belgium and his wife Queen Mathilde arrived in Chelsea in a diplomatic vehicle ahead of the funeral.

Politicians were also seen stepping out just as the stewards put the finishing touches to the sand outside where the gun carriage will draw to a halt.

Panic as hundreds of customers are evacuated over 'gas leak'

US President Joe Biden will be 14 rows back on the south transept behind the Polish leader and in front of the leader of the Czech Republic.

And directly across the aisle from Mr Biden’s place, the seat is labelled the Republic of Korea.

In the front of the south transept will be Realms governors general and then commonwealth counties followed by other nations including the US.

The Queen's coffin will be carried on a Gun Carriage at 10.44am today from Westminster Hall, after Lying-in-State there for four days.

Her Majesty's funeral procession will then be led by King Charles and Camilla, Queen Consort.

Across Parliament Square, in the Elizabeth Tower, the muffled Big Ben bell strikes 11 o’clock, marking the start of the State Funeral of Queen Elizabeth II.

Dean of Westminster, Dr David Hoyle, will lead the service, which the Queen had helped to plan.

The Archbishop of York, the Catholic Archbishop of Westminster and Moderators of the Church of Scotland and the Free Churches say prayers.

Prime Minister Liz Truss and Secretary General of the Commonwealth Baroness Scotland read the lessons, while Archbishop of Canterbury Justin Welby gives the sermon and the Commendation.

And once Pipe Major Paul Burns, the Queen’s piper, has played his lament, the service will come to an end. 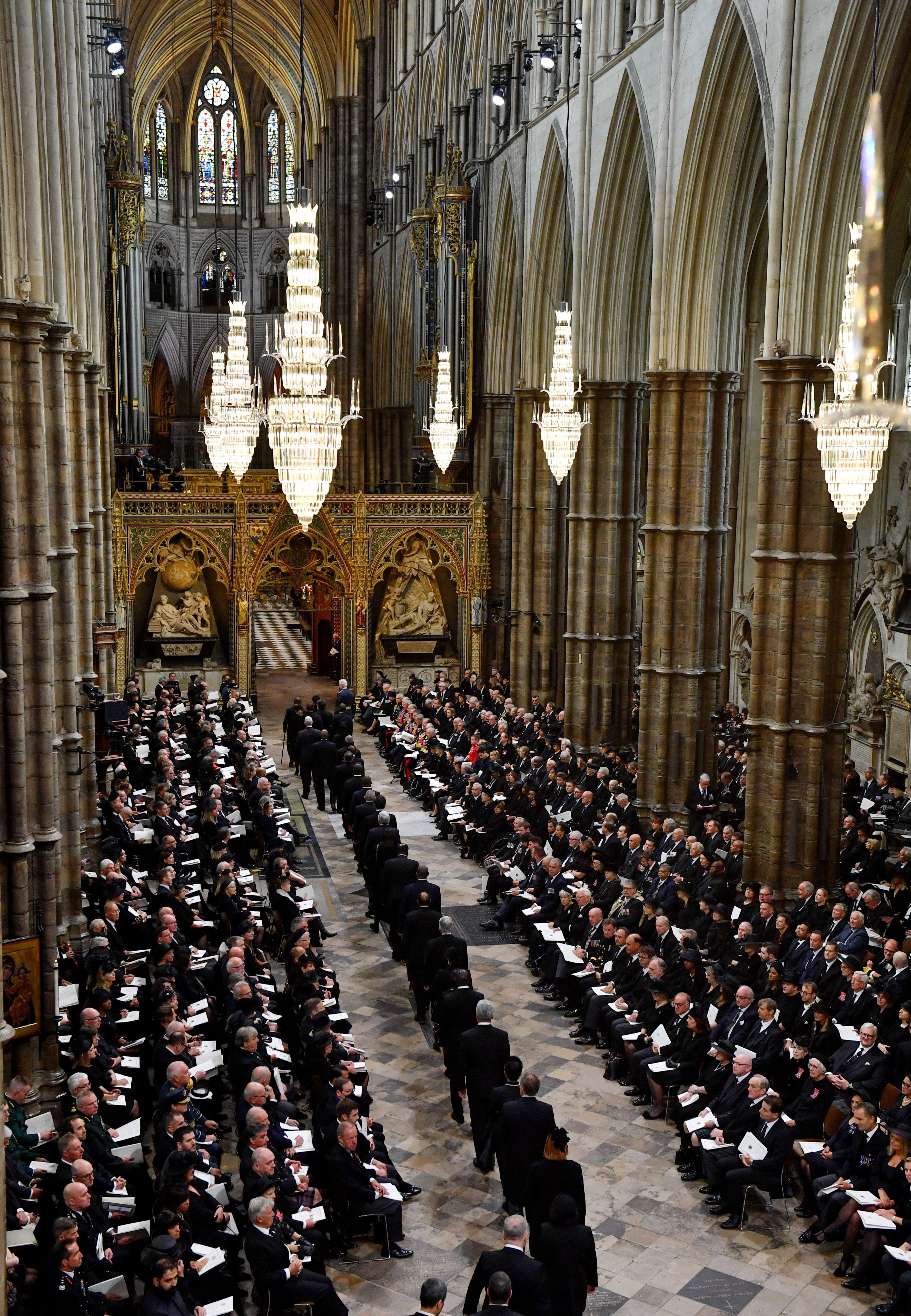 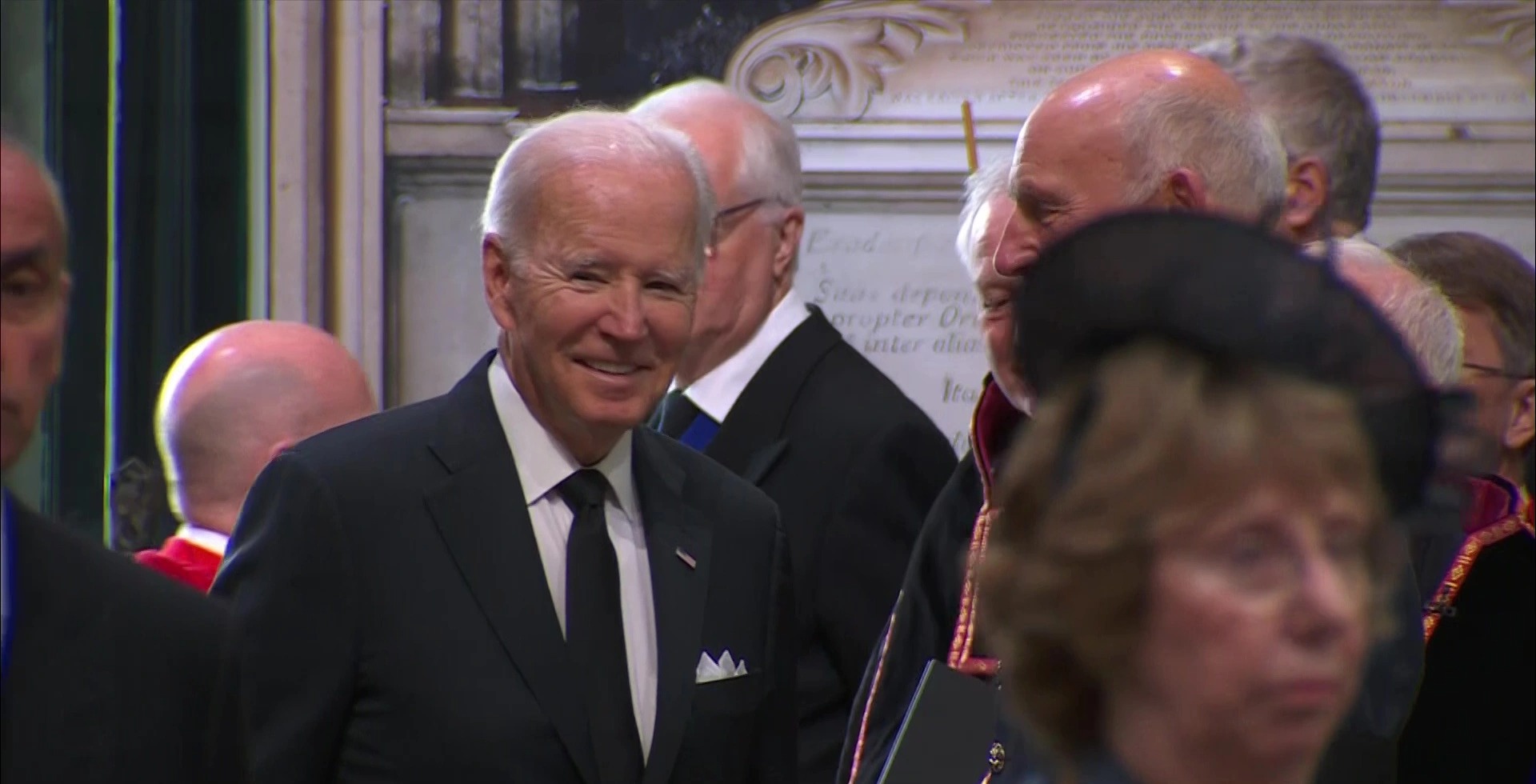 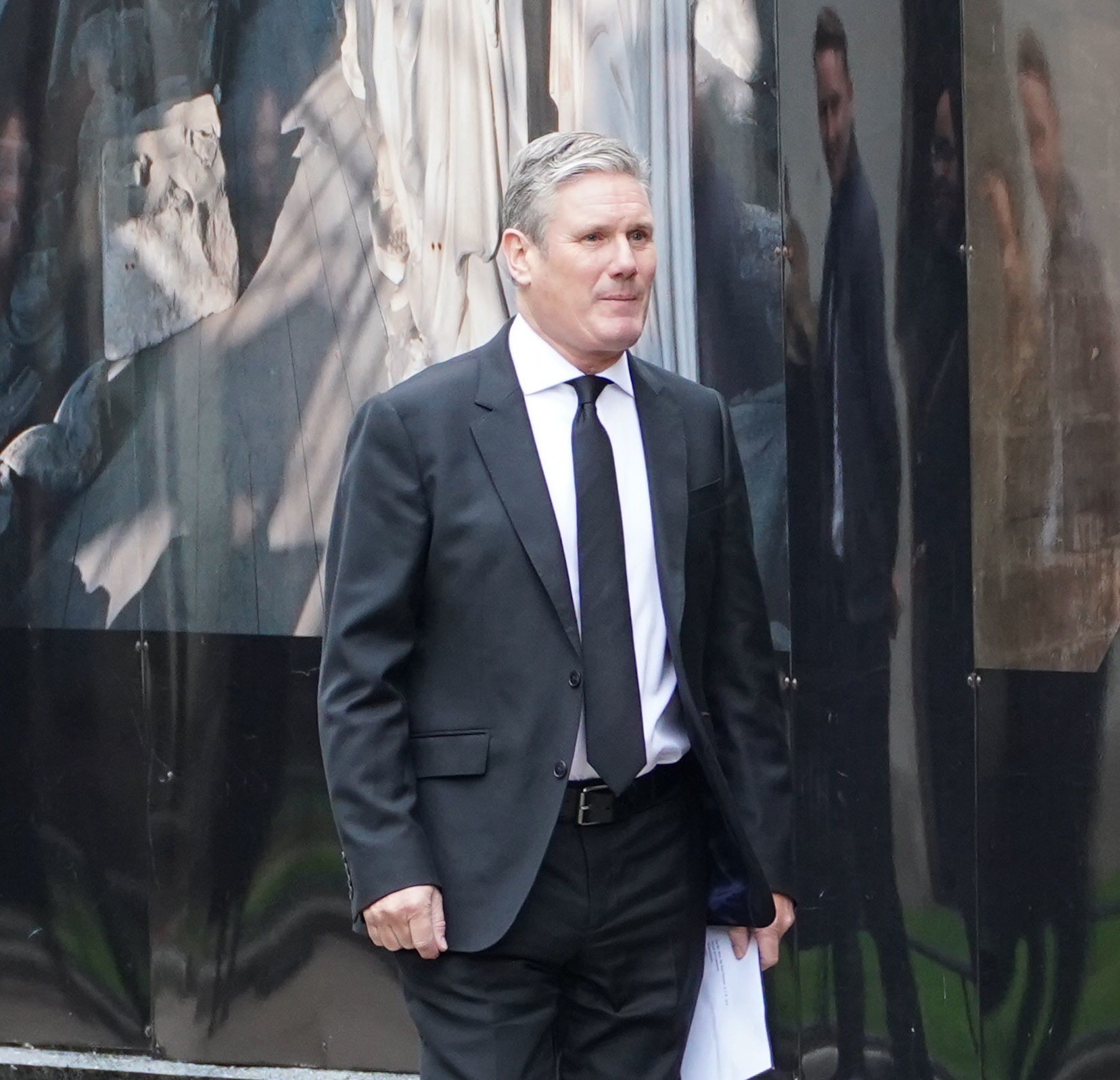 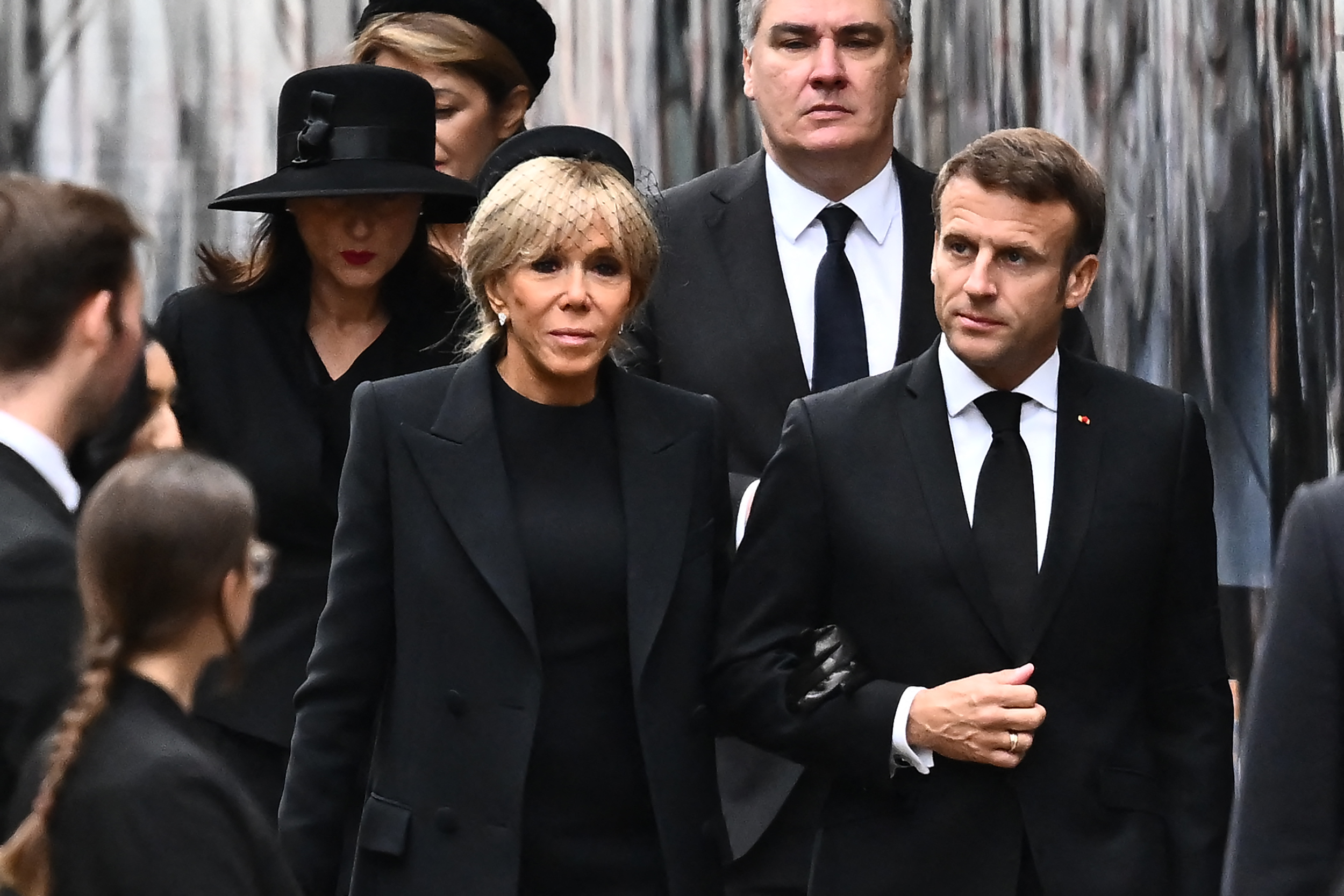 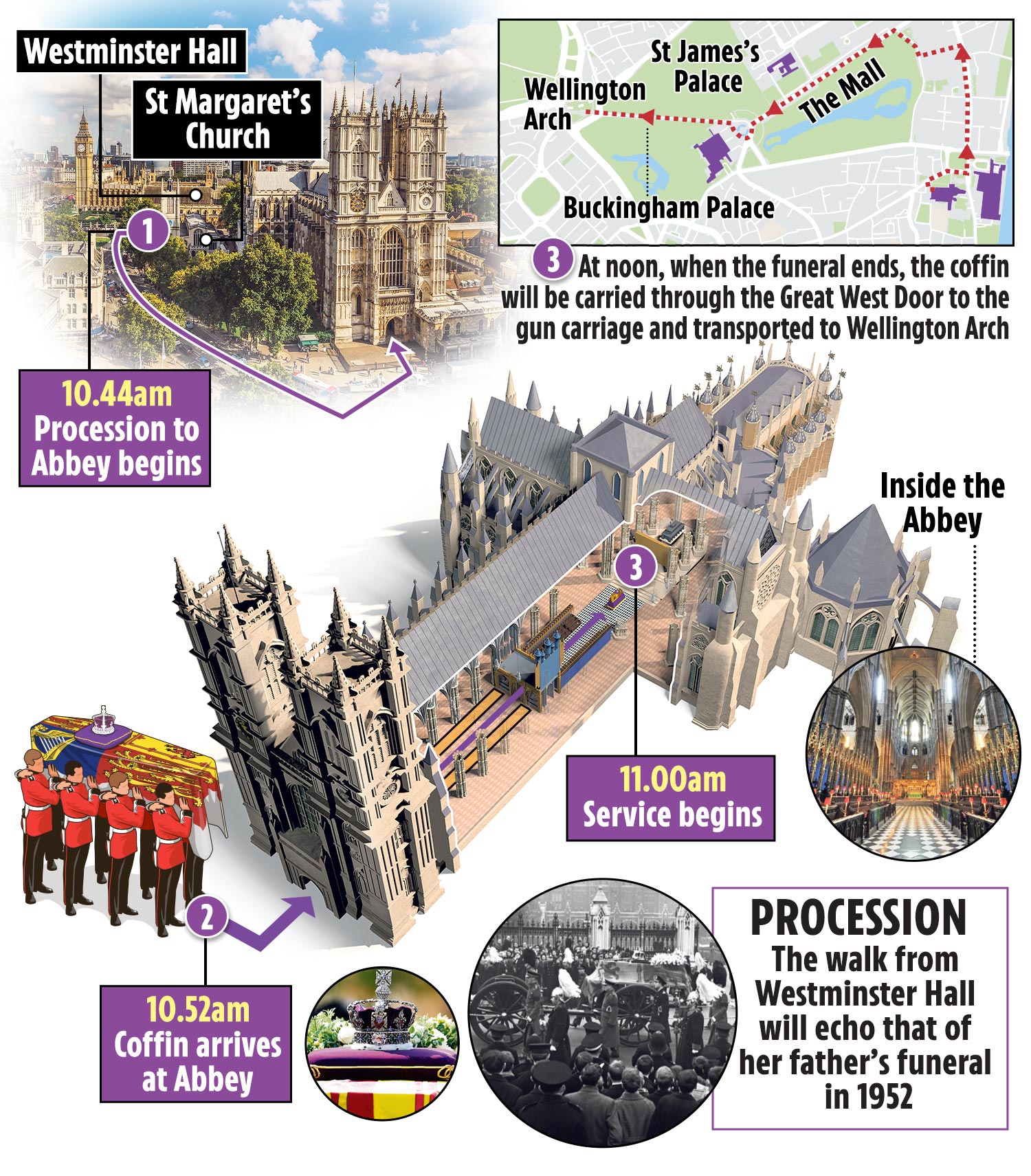 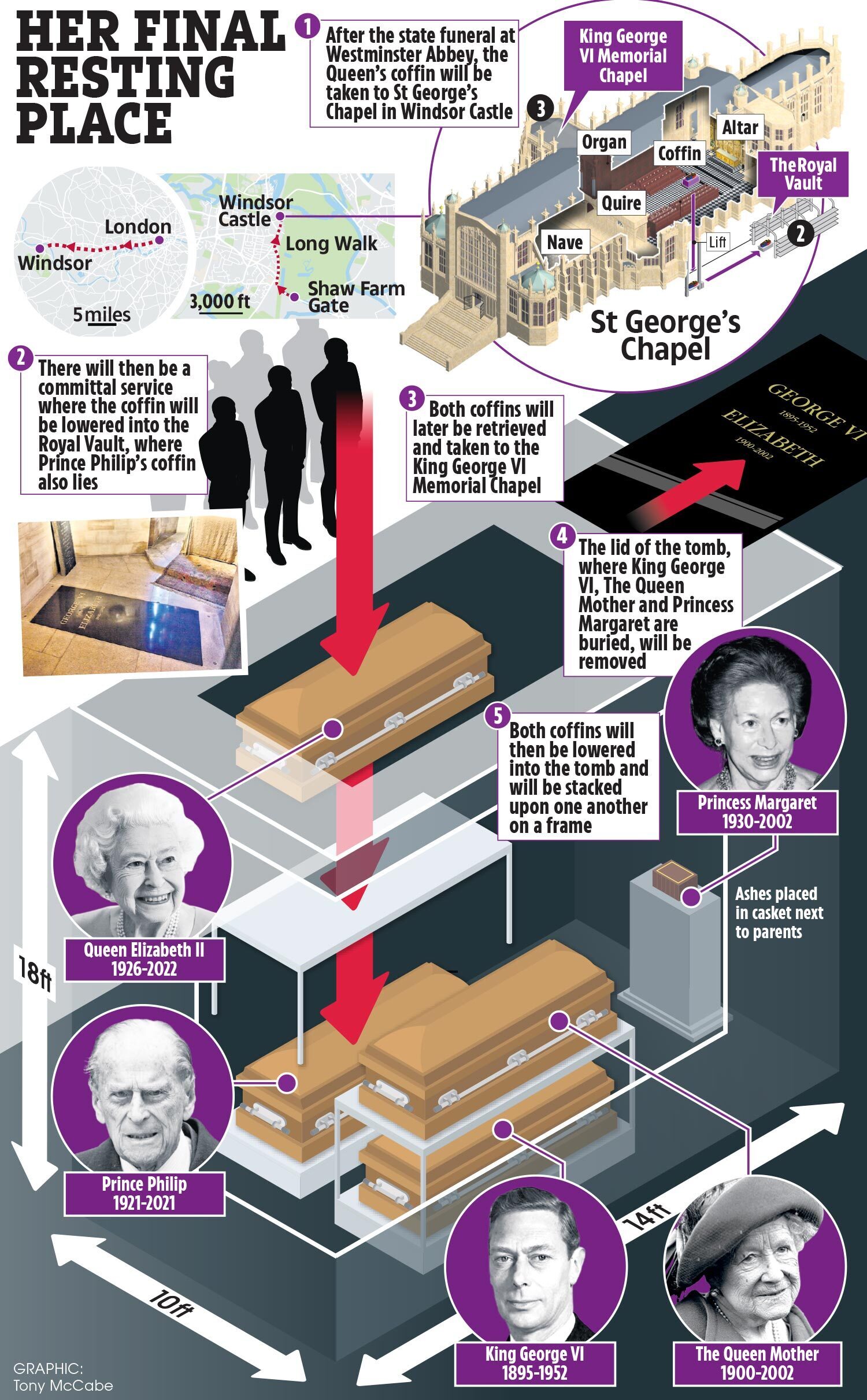 BBC One, ITV, Sky and TalkTV are covering the day’s events live: