Rescuers found more bodies as they resumed operations at dawn on Friday.

More than 200 disaster response workers and police used earth-clearing equipment like bulldozers to rescue those buried under the debris in Noney, a town near Imphal, the capital of Manipur state. But the terrain was making it difficult to move heavy equipment, said H. Guite, district magistrate, adding that he had asked for reinforcements. 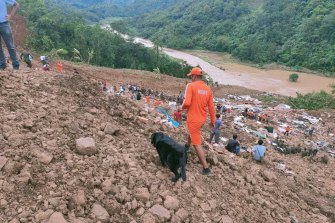 Personnel from India’s National Disaster Response Force and others trying to rescue those buried under the debris in Noney, northeastern Manipur state, India.Credit:AP

Sixteen bodies have been recovered so far after a hillock caved in and buried the railroad project area, Guite said as intermittent rain continued.

A flowing river has been blocked by the debris creating a dam in the area, he said. People living nearby have been asked to move to safe areas, media reports said.

Seven of the confirmed dead were members of the Territorial Army, state chief minister N. Biren Singh said. He said five Indian Railway officials were among those feared missing.

Because there is a rebel insurgency in the area, army personnel were there providing security for the railway officials. The state’s decades-old insurgency seeks a separate homeland for ethnic and tribal groups. 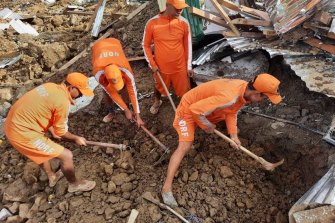 Most of the victims were sleeping when the landslide hit the area. Some survivors recalled being swept down by the gush of the hill debris, The Times of India daily cited Daichuipao, a resident, as saying.

Prime Minister Narendra Modi said he reviewed the situation with local authorities. “Assured all possible support from the Centre [federal government],” he tweeted.

Continuous rainfall over the past three weeks has wreaked havoc across India’s north-east — which has eight states and 45 million people — and in neighbouring Bangladesh.

An estimated 200 people have been killed in heavy downpours and mudslides in states including Assam, Manipur, Tripura and Sikkim, while 42 people have died in Bangladesh since May 17. Hundreds of thousands have been displaced.

Scientists say climate change is a factor behind the erratic, early rains that triggered the unprecedented floods. Monsoon rains in South Asia typically begin in June, but torrential rain lashed northeastern India and Bangladesh as early as March this year.

With rising global temperatures due to climate change, experts say the monsoon season is becoming more variable, meaning that much of the rain that would typically fall throughout the season arrives in a shorter period.