Respected architect, 68, who torched businessman’s prized £67,000 Range Rover after being threatened with legal action over work on his £3.5million mansion is jailed for 26 months after admitting arson 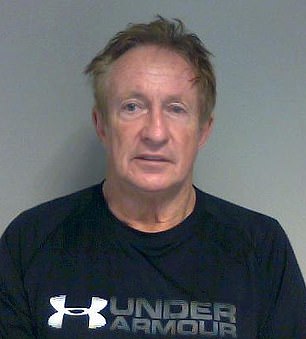 Architect Christopher Chapman, 68, ‘lost the plot’ as he poured petrol over a £67,000 Range Rover after receiving a solicitor’s letter from his friend and client, Robb Simms-Davies, that threatened to take him to court

A respected architect has been jailed for more than two years after he firebombed his former friend’s car and sent him threatening letters following a blazing row over work on a multimillion pound country house.

Christopher Chapman, 68, ‘lost the plot’ as he poured petrol over a prized £67,000 Range Rover and set it ablaze after receiving a solicitor’s letter from his friend and client, Robb Simms-Davies, that threatened to take him to court.

At the centre of the row between the two former friends was Mr Simms-Davies’ £3.5million Berkshire home – which Chapman had been commissioned to work on in his role as a chartered architect in 2019.

The following morning, Chapman returned to the scene of the crime where he posted threatening letters through Mr Simms-Davies’ letterbox with one warning: ‘Withdraw your proceedings or your family will never be safe from that “tragic accident”.’

Chapman, who had known Mr Simms-Davies for almost 20 years and worked together on projects before, admitted the offences and repaid his victim around £44,000 following the firebombing attack.

The fiery fall-out between the businessmen saw Chapman sentenced after admitting charges of arson, intimidating a witness and two counts of possession of a weapon.

Sitting in court wearing a black suit with a red tie, the architect, who was responsible for work on dozens of art galleries across the country and lived in upmarket Holyport in Berkshire, was jailed for 26 months. 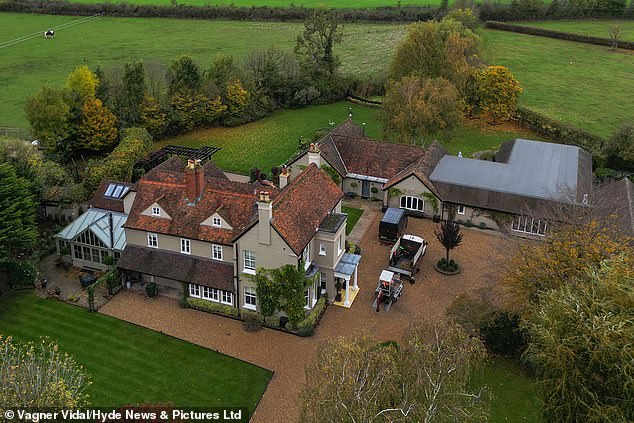 At the centre of the row between the two former friends was Mr Simms-Davies’ £3.5million Berkshire home (pictured) – which Chapman had been commissioned to work on in his role as a chartered architect in 2019

Judge Paul Dugdale heard that well-respected architect Chapman received a letter one morning in March last year, from a firm of solicitors informing him that his long-term client and business friend, Robb Simms-Davies was due to start civil proceedings against him.

‘The following day, he delivered two letters to the address – one was intimidating in nature and, when the defendant’s home address was searched, two cans of pepper spray were found. There is no suggestion there is any correlation to the incident.

‘This was a response to an ongoing dispute between the parties. Mr Chapman was an architect and Mr Simms-Davies was a regular client and the two had a business relationship. There was however, a dispute over work done, payment and allegations of negligence.

‘The dispute resulted in Mr Chapman receiving a letter on March 6, 2021 from a solicitor.

‘That evening, he attended the claimant’s address with petrol and a large stick. The property in question is substantial – it has an indoor swimming pool and a tennis court.

‘In the CCTV footage he can be seen dousing the Range Rover in petrol and leaving a trail, which he then ignited. The car goes up in flames and is destroyed.

‘The vehicle cost approximately £67,000, and the fire was large enough that the heat cracked the front six windows of the house.’

Chapman’s fire-bombing of the car and later visit to the scene armed with the threatening letters was all captured on the home’s CCTV security cameras.

The judge who jailed him for 26 months described the hearing as a ‘sad day’ but tried to reassure the architect as he left the dock that his time in a prison cell would quickly pass.

Ben Newton, defending, told Judge Dugdale: ‘There is a lot of context to this. Mr Chapman had been a qualified architect and chartered since 1982. 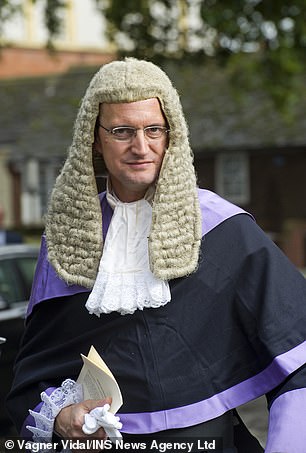 Judge Paul Dugdale, who jailed Chapman for 26 months, described the hearing as a ‘sad day’ but tried to reassure the architect as he left the dock that his time in a prison cell would quickly pass.

‘He had been running his own practice since 1981 and has known Mr Simms-Davies for almost two decades.

‘Mr Simms-Davies commissioned him on a variety of projects. They have had dinners together and had become business friends. In 2019 he was commissioned for an 18-month contract to work on Old Whitelocks, and arrangements became more and more complex.’

The barrister explained how, after the two had worked together on the victim’s home address, Mr Simms-Davies had complaints which he took to a solicitor.

‘Mr Chapman’s response takes place within 24 hours. He receives the letter from the solicitors at 11am that morning and that evening he goes to Mr Simms-Davies’ address and commits the arson. The following day he delivers the letters.

‘On that day, Mr Chapman felt vulnerable, powerless and exposed. He was extremely fearful for his reputation – he panicked and in a 24-hour period he loses the plot.’

The lawyer added that Chapman paid the victim – believed to be £44,000 – for the damages caused and believed the victim knew his written threat was empty.

Mr Newton continued: ‘He knows this was a dreadful overreaction and he is wholly ashamed of what he has done.’

Sentencing, Judge Dugdale said: ‘Well, it’s a very sad day isn’t it really? I imagine that not in a million years did you or any of the people who have written such nice things about you, would see you face a crown court judge.

‘I am sorry that life has taken this turn. I say that because it is a human thing to do and you have made what many would call a big mistake. On the morning of these offences you received a letter from the solicitors of Mr Simms-Davies saying that he was about to start proceedings.

‘You lost the plot. You went to his house where he was having supper with his children and you poured petrol over his car and lit it. The next day you left a letter which directly threatened him and it made implied threats in relation to his children.

‘It read ‘they would never be safe from the ‘tragic accident. Just how truly irreplaceable are they? This is not a battle you will win so walk away from it now.’

‘That’s a terrible thing to write,’ said the judge.

Speaking to Chapman as he left the dock, the judge added: ‘The time will pass quickly and this is not the end of the world. This time will pass, and your life will carry on.’