Retired general says the U.S. should consider a NUCLEAR response to Russia as an option to deter Putin in Ukraine

A retired general suggested on Wednesday that the US should threaten Russia with a ‘nuclear response’ among other measures to deter Vladimir Putin from committing such an attack in Ukraine.

The Russian autocrat has alarmed global leaders and officials with his increasingly forward threats to use nuclear weapons months after he launched a brutal invasion of Ukraine in late February.

Retired Brigadier General Mark Kimmitt said on CNN that any contingency plan the US would have to involve a ‘deliberately vague’ message that suggested President Joe Biden was ready with a range of responses from severe physical threats to economic retaliation.

‘My personal view is I think we ought to be deliberately vague in what we are prepared to do.’

Kimmitt warned against drawing a ‘red line’ that warrants a response.

Such a step was taken by Barack Obama in 2013 over Syria’s use of chemical weapons – when Biden was vice president – and famously dealt a blow to the then-president’s foreign policy credibility when the US military did not strike the Assad Regime for it. 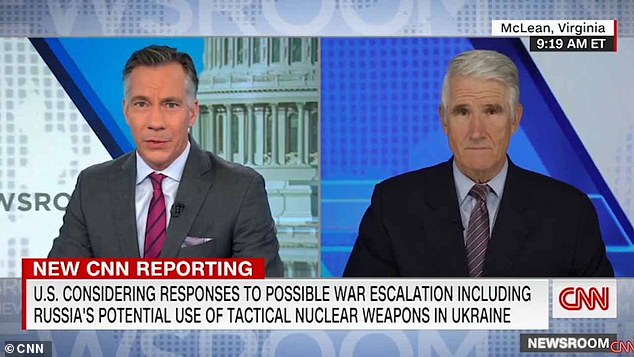 ‘Anytime you draw a red line, that commits you to a certain course of action,’ the retired general said.

‘Look I think it’s fairly simple to lay down the options – it could be the soft side of it which is doubling down on sanctions, doubling down on export controls – ranging all the way to a nuclear response of our own and everything in between.’

The threat of nuclear action by Putin comes as Ukraine’s forces mount a spectacular counter-offensive that has liberated parts of the country which had been held hostage by Moscow’s troops for weeks.

Russians continue to hold the Zaporizhzhia nuclear plant, Europe’s largest, adding to fears that an attack with non-nuclear weapons on the facility could result in a disaster of catastrophic proportions.

Kyiv has accused Moscow of shelling near the plant, which the Kremlin denies.

Ukrainian President Volodymyr Zelensky told CBS News’ Face the Nation on Sunday that Putin was ‘not bluffing’ with his nuclear threats.

‘The missile hit the area that was 300 meters from the nuclear plant. The nuclear plant lost all the windows and doors, etc,’ Zelensky said of a recent attack on the facility.

‘So, he wants to scare the whole world. These are the first steps of his nuclear blackmail.’

He added, ‘I don’t think he’s bluffing. I think the world is deterring it and containing this threat. We need to keep putting pressure on him and not allow him to continue.’

It comes amid international condemnation of Moscow’s ‘sham’ referendums in parts of eastern Ukraine that are being occupied by Russia.

Videos have appeared to show residents being forced to the polls at gunpoint to vote on whether to allow Russia to annex their home territories.

While signing a decree annexing the regions, Putin suggested he would be ready to use nuclear power to stop the West’s involvement aiding Ukraine there.