Police appeal for help to find parents of ‘distressed’ Ukrainian boy, eight, who was spotted alone on housing estate before running off

Police have launched a desperate plea to find the parents of a ‘distressed’ Ukrainian child after he was seen alone on the streets of North Yorkshire.

The ‘lost’ young boy, thought to be eight years old, was spotted at 6.40pm last night riding a scooter on his own near Nursery Gardens in Yarm, Stockton-on-Tees.

He spoke with limited English and appeared to indicate he was Ukrainian, a witness told police yesterday.

Cleveland Police are now desperately trying to find out if the young boy is safe and well. 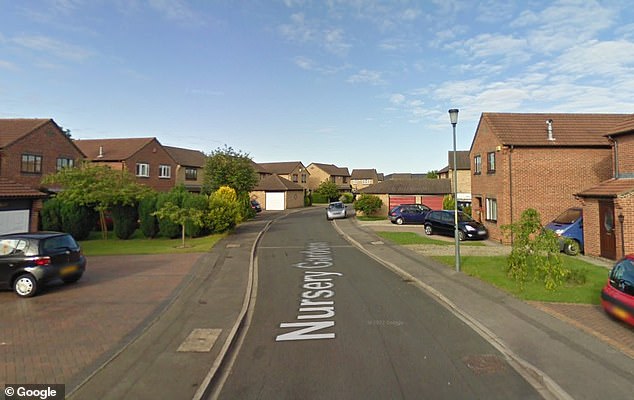 Police are trying to find the parents of a ‘distressed’ Ukrainian boy who was seen on his own yesterday evening. General image of Nursery Gardens in Yarm, Stockton-on-Tees, where the child was spotted

He was last spotted bolting out of sight into a neighbouring estate.

Officers have appealed to the public to see if he has been reunited with his family after the worrying public reports.

Cleveland Police said in a statement: ‘Just before 6.40pm yesterday (Sunday) a member of the public contacted police with concerns for a young child she’d seen out alone on his scooter near Nursery Gardens in Yarm. The boy had very limited English but appeared to indicate he was Ukrainian.

‘As the caller was relaying to police she believed the child was lost and distressed, he bolted into the nearby estate and disappeared from sight.

‘Officers immediately began enquiries to identify and locate the child and to check his welfare and wellbeing.

‘Police have still not received any report of a missing child matching the boy’s description, however enquiries have continued overnight, and we need to confirm he is safe and well and back with his family.

‘The original call was made in good faith and we’d like to thank other callers who rang in with information – we would ask anyone else who may have information to contact Cleveland Police on 101 quoting ref 115208.’