THIS is the shocking moment a massive tiger shark dubbed "Big Mama" chomps down on a diver's head before pals kick the beast away.

Real-time underwater footage shows the hungry shark circling a group of divers before it goes in for the kill. 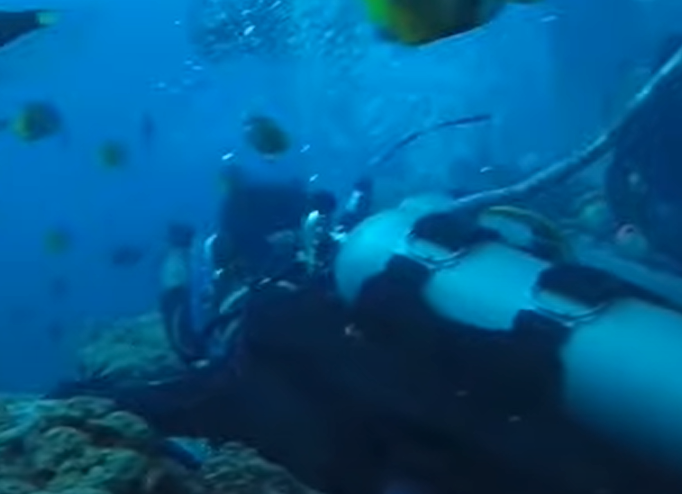 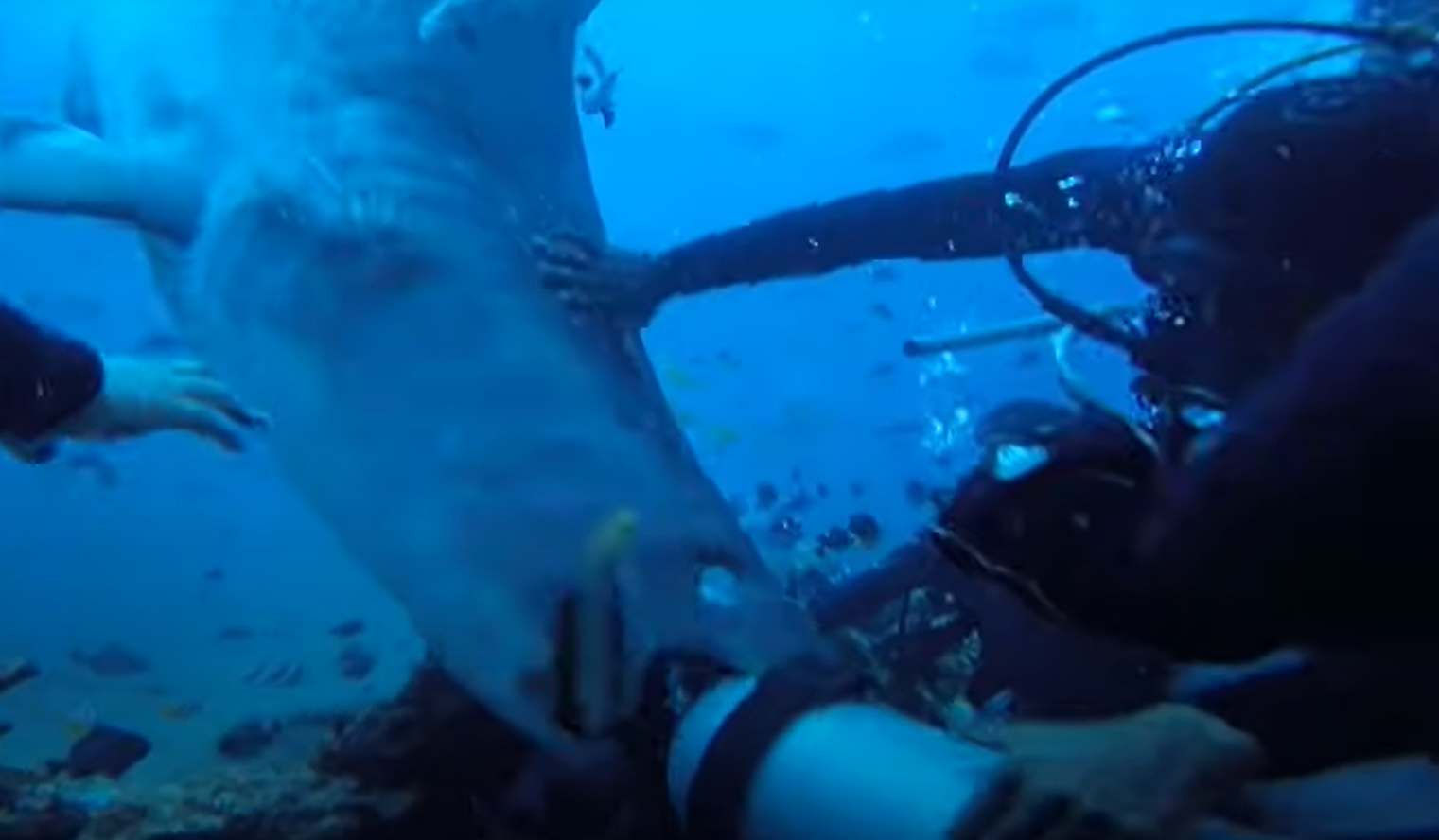 At first, the shark appears harmless as it moves around the group and eventually gets pushed away.

But moments later it returns and attacks the group of 12 divers, clenching one by the head, according to the Fiji Times.

The others frantically try kicking and punching the shark away until it eventually releases its prey and swims off.

Other drivers say tour groups regularly play "Russian Roulette" with the shark, which often approaches divers and has to be pushed away with sticks and poles, according to Beach Grit.

Footage of the attack recently re-emerged on the chat forum Reddit.

The incident took place off Beqa Island, Fiji, when a tour group took tourists out for a dive.

A close friend of the victim, who was a tourist visiting from Malaysia, told the Fiji Times the tiger shark was roughly four to five metres in length and unexpectedly changed it swim path to attack them.

"The shark turned to bite the divers and my friend was the unlucky one," the woman, who wishes to remain anonymous, said at the time.

"At that time all the dive masters rushed to push her away, but it was already too late.

"His head was in the shark’s mouth and later the dive master managed to kick her away.

"While the shark was leaving, the victim’s mask and hoodie were pulled off."

The victim was sent to a local clinic with eight centimetre-long and 0.5 centimetre-deep wounds on his head, according to a medical report.

The tour company has since apologised over the incident.

Footage of the attack has recently surfaced, two years after it took place.

This comes as the number of shark attacks across the globe explodes, with nearly 800 victims claimed in just nine years.

America overtook Australia for the number of attacks with Cape Cod, Massachusetts, now considered the shark capital of the world.

However, despite a spike in maulings by the ferocious beasts and signs warning of attacks on beaches in the US and Australia, swimmers are still putting themselves at risk.

This year has seen 49 shark attacks – six being fatal – across the globe, as the underwater predators continue to get closer to humans.

The US recorded the largest number of shark bites, reporting 33 incidents, while Australia recorded 18.

A whopping 791 shark attacks have been reported between 2010 and 2019, according to data published by the International Shark Attack File, with an annual global average of 80 bites.

It shows an incredible rise compared to data from 1970 to 1979, when just 157 attacks were reported.

Surfers and water sports lovers seem to be the prime targets, accounting for 61 per cent of victims last year. 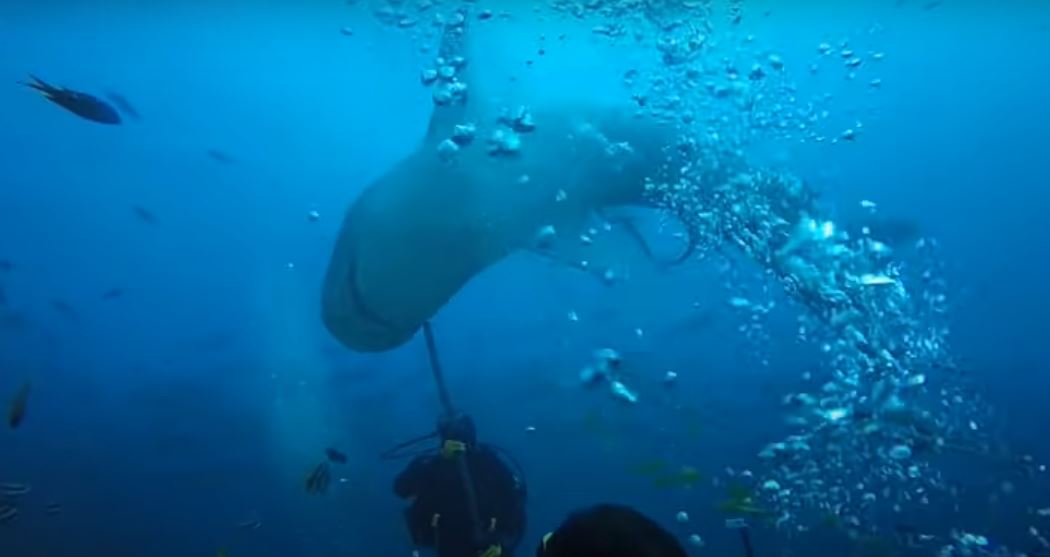 Scientists have suggested shifting hunting grounds, the weather, an increase in staycations, overfishing and even "chance" may have played a role in the spike.

Out of those nine, seven have died in Australia alone – the country's highest number in 86 years.

The two fatalities outside of Australia occurred in the US, in California and Maine.

Experts however insist shark attacks remain rare and the figures are roughly in line with previous numbers over the last decade.

Shark warnings have been issued for parts of Australia in this year – with at least two mass closures of beaches over fears of circling great whites.

Some 17 beaches were closed earlier in May due to a "huge number" of sightings in New South Wales, reported 9News.

The sharks were lured in closer to the shore by a dead whale which washed up on a beach in Casuarina.

And then a second whale washed up there a week later – prompting another massive closure amid shark fears.

To view the full video of the shark attack, click here. 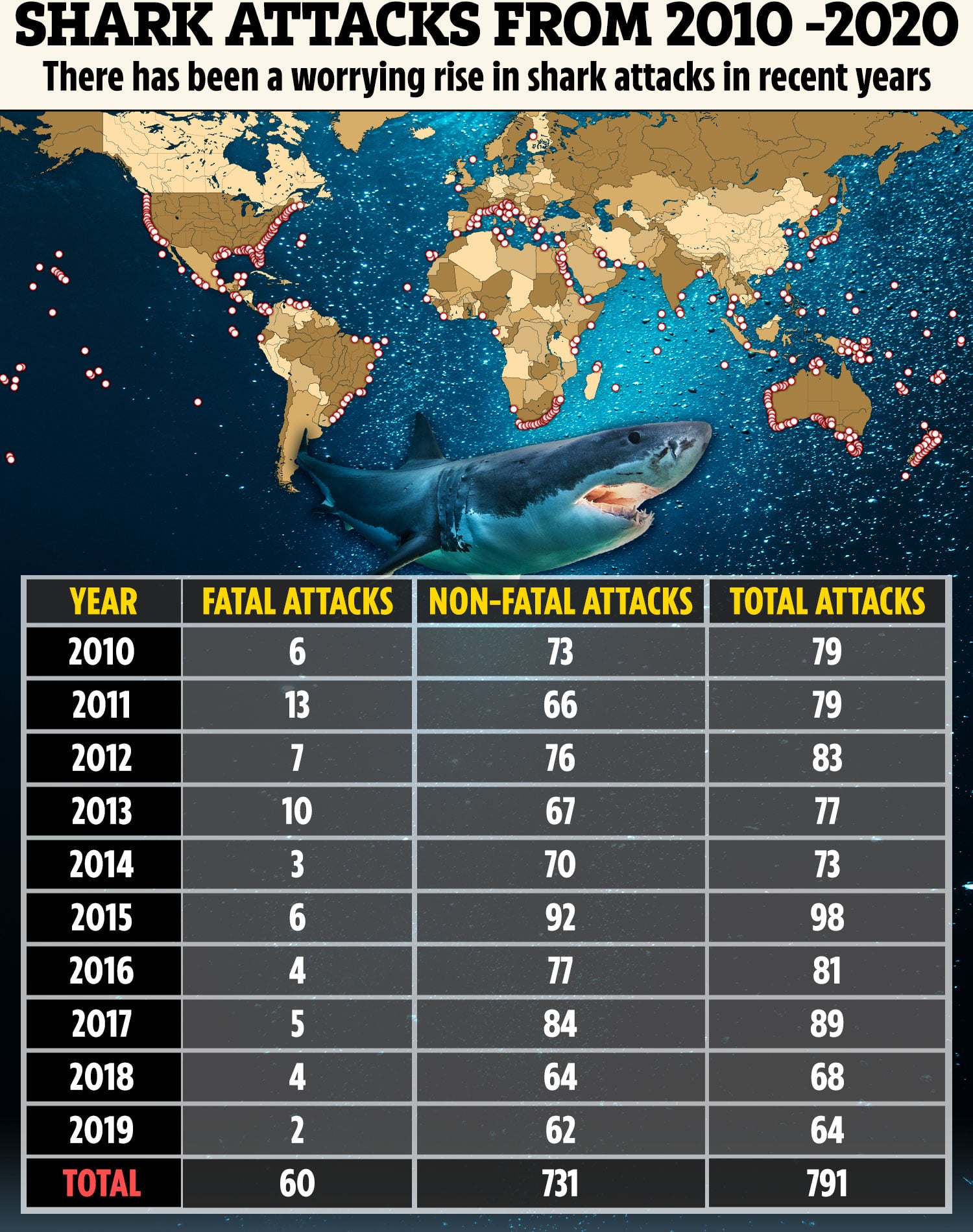