London: A 1300-year-old gold-and-gemstone necklace that was recently discovered in an ancient grave site in England may have belonged to a woman who was an early Christian leader, according to experts involved in the discovery.

The ancient jewellery was unearthed in Northamptonshire in April during excavations that took place before a planned housing development, according to RPS, a professional services firm that managed the archaeological investigation on behalf of the housing developer, Vistry Group. 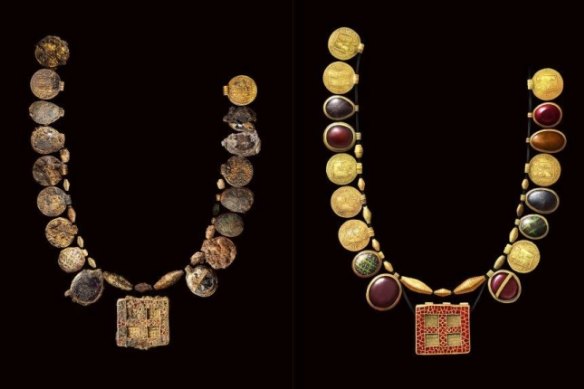 The necklace, left, and depicted on the right as if it was new, was found in Harpole, England, date from around the 600s. Credit:Andy Chopping/MOLA

The 30 pendants and beads that once formed the elaborate necklace were made from Roman coins, gold, garnets, glass and semiprecious stones. The centrepiece of the necklace, a rectangular pendant with a cross motif, was also among the artefacts were discovered.

“When the first glints of gold started to emerge from the soil, we knew this was something significant,” Levente-Bence Balázs, a site supervisor at the Museum of Archaeology London, who led a team of five that made the discovery, said in a statement. “However, we didn’t quite realise how special this was going to be.”

While the soil is being investigated more closely, “this large and ornate piece suggests the woman may have been an early Christian leader,” the statement said, adding that she might have been an abbess, royalty or both. The site also contained two decorated pots and a shallow copper dish. 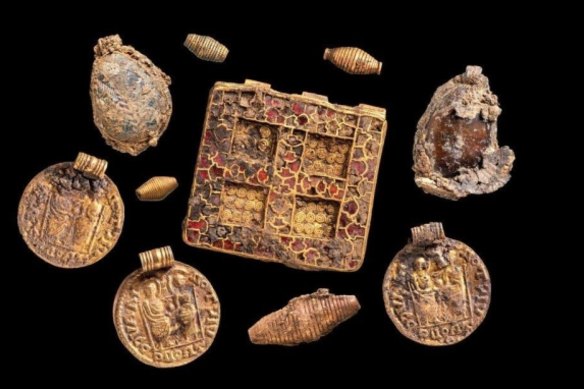 The artefacts were found in a female burial in Harpole, England in April.Credit:Andy Chopping/MOLA

The skeleton itself has decomposed, with only tiny fragments of tooth enamel remaining. But the Museum of Archaeology London said it was almost certain that a woman was buried there because similar necklaces and lavish burial sites were almost exclusively found in female graves in the period.

Scholars said the discovery pointed to the important but often overlooked role of women in the development of early Christianity.

“The evidence does seem to point to an early female Saxon church leader, perhaps one of the first in this region,” Helen Bond, a professor of Christian origins and head of the School of Divinity at the University of Edinburgh, in Scotland, wrote in an email.

“We know from the Gospels that women played an important role in the earliest Christian movement, acting as disciples, apostles, teachers and missionaries,” Bond wrote. “While their role was diminished later on at the highest levels, there were always places where women leaders continued (even sometimes as bishops).”

Amy Brown Hughes, a historical theologian at Gordon College, who studies early Christianity, called the necklace, which has been traced to the years 630 to 670, an “absolutely stunning” artefact from a volatile period when Christianity was becoming established in Anglo-Saxon England.

Noting that women have often been left out of narratives about Christianity, Hughes said the necklace provides material evidence that “helps to reorient our assumptions about who actually had influence and authority”.

“Her burial demonstrated that this was a woman who was respected as a Christian, known for her devotion, and had some level of authority and influence,” Hughes said in an interview.

Joan Taylor, a professor of Christian origins and Second Temple Judaism at King’s College London, said the fact that the woman was apparently buried in a village far from a main population centre “testifies to the troubled times in this region of Britain in the 7th century”.

“Perhaps she was on a journey, or fleeing,” Taylor said. “It was a tough Game of Thrones world with competing royal rulers aiming for supremacy. It was also a time where Christianity was spreading, and abbesses and other high-status women could play an important role in this.”

The Museum of Archaeology London said it was at “a very early stage of the conservation” of the artefacts and that it hoped to identify organic material that had survived and learn more about the cross and necklace.

In statements hailing the artefacts, the museum and RPS referred to them as the “Harpole treasure”, named for the village of Harpole near the grave site, and RPS said they would be featured in an instalment of the BBC series Digging for Britain.

“This find is truly a once-in-a-lifetime discovery,” Simon Mortimer, an archaeology consultant at RPS, said, “the sort of thing you read about in textbooks and not something you expect to see coming out of the ground in front of you.”