A growing number of banks are withdrawing mortgage deals over fears the Bank of England will further raise interest rates to counter the plunging pound – increasing monthly repayments for the average family by as much as £800.

Lenders across the country, including Halifax, Virgin Money and Skipton, have taken the step after analysts warned the base rate could surge to 6 per cent next spring, after Sterling plummeted in response to Chancellor Kwasi Kwarteng’s mini-Budget announcement last week.

The surging costs could spell disaster for families who are already struggling with the cost-of-living crisis, while first time buyers face monthly repayments upwards of £1,100, a third more than they were paying in January, according to property portal RightMove.

Which banks have pulled mortgages?

Halifax: Pulled all its products for homebuyers that charge a fee ‘as a result of significant changes in mortgage market pricing’ in recent weeks.

Virgin Money:  Removed its entire range for new customers. Applications for mortgages which have already been submitted will be processed as normal and existing borrowers will still be able to transfer to a different deal.

The Nottingham for Intermediaries: Pulled fixed mortgages for new customers.

The base rate is currently at 2.25 per cent after the seventh consecutive increase last Thursday – up from a record-low of 0.1 per cent in December.

An increase to as high as 6 per cent next year would be a major blow for around two million homeowners who have variable loans, which move in line with the base rate.

There are also a further 1.8million borrowers who are currently locked into cheap fixed deals which are due expire over the next year.

They now face paying thousands of pounds more a year when they come to remortgage as lenders frantically hike rates to reflect analysts’ predictions.

Someone who took out a £200,000 two-year fixed mortgage in March 2021, when the average rate was 1.5 per cent, would see their annual bill leap by £7,000 if rates rise to 6 per cent, according to figures from investment firm AJ Bell.

In another setback for borrowers desperately seeking to lock into an affordable fixed deal, many lenders have responded to interest rate uncertainty by temporarily quitting the market altogether.

As many as 20 lenders moved to withdraw dozens of loans yesterday, according to mortgage broker L&C.

The pound steadied in early trading in Asian markets on Tuesday as it recovered ground slightly.

Sterling sat around around 1.08 dollars by 7am, but economists have warned it could still fall to parity with the dollar this year for the first time.

Senior Tory MP Huw Merriman – who backed former chancellor Rishi Sunak for Conservative leader – warned Liz Truss may be losing voters ‘with policies we warned against’, as a new YouGov survey put Labour 17 points ahead, the party’s greatest lead since the firm started polling in 2001. 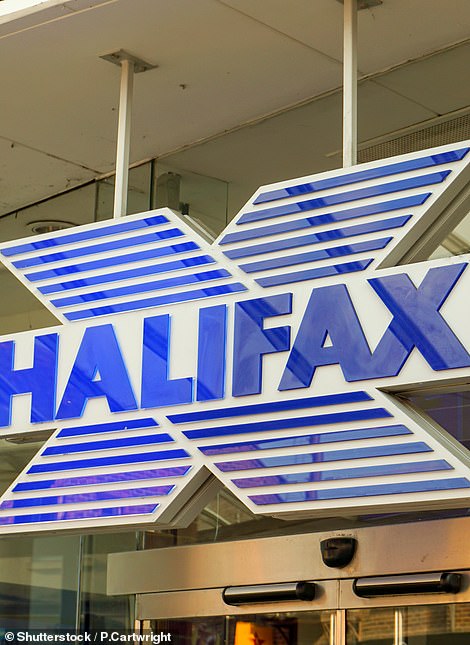 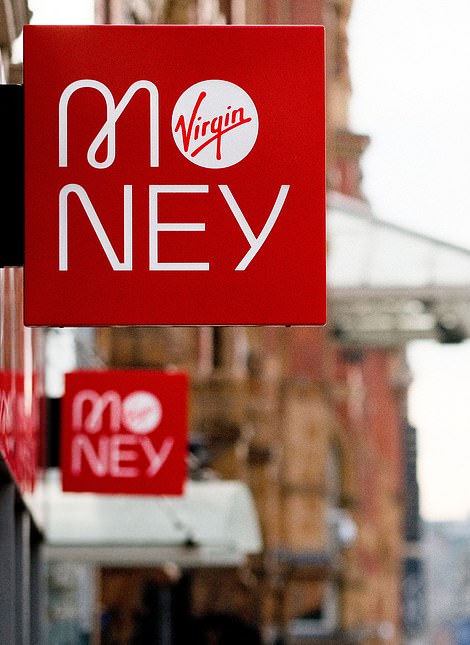 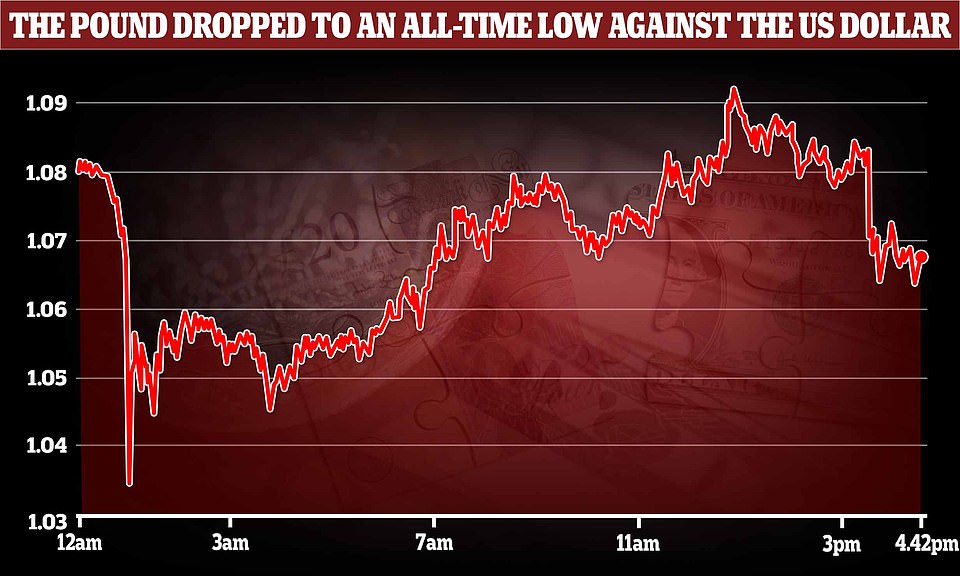 The pound, which was already at a 37-year low against the dollar, has fallen further. Sterling was trading at more than $1.16 when Liz Truss became Prime Minister just 20 days ago. It fell close to $1.08 on Friday and went as low as $1.0386 during overnight trading in Asia. UK bonds have also slumped – pushing up the cost of government borrowing.

Why is sterling down?

The dollar has been surging against all currencies as it combats inflation with aggressive rate hikes. The US economy also looks healthier than those of Britain and Europe. Meanwhile Britain has been racked by political uncertainty and a cost of living crisis. The Bank of England has not acted as forcefully to combat inflation as expected and new Chancellor Kwasi Kwarteng has stunned markets with the biggest tax cuts in 50 years. Coupled with the massive energy bill support package, this has fuelled worries about the scale of government borrowing. Mr Kwarteng doubled down over the weekend, pledging: ‘There’s more to come’. The pound then resumed its sell-off.

What can be done?

The Chancellor has ruled out a U-turn, leaving the Bank of England to watch the markets.Governor Andrew Bailey says the Bank ‘will not hesitate’ to hike rates if needed, but that may not be enough to halt the pound’s rapid slide.

Can a weak pound have advantages?

UK exporters will find their products are more competitively-priced against global rivals. However, components for products made in the UK are often made abroad so those exporters will in many cases be absorbing higher costs.

What does it mean for households?

Holidaymakers will find their spending money does not stretch as far and filling up a car could also become more expensive because oil is priced in dollars and will cost more to import. According to the AA, the average tank of petrol has already increased by £7.50. When the pound falls, it can also push up prices in the shops as the cost of buying goods from overseas rises. Meanwhile, the Bank of England is expected to raise its base rate, making borrowing – especially on mortgages – more costly. There is no guarantee that banks will pass on rate rises to savers – and even then it is unlikely to stop the value of savers’ cash being eroded by high inflation. The impact on investments depends on whether companies are sensitive to a weaker pound.

Mortgage giant Halifax pulled all its products for homebuyers that charge a fee ‘as a result of significant changes in mortgage market pricing’ in recent weeks.

A string of smaller lenders followed in its footsteps.

Halifax stressed that it had not changed its mortgage rates and that it continued to offer arrangement fee-free options for borrowers.

Meanwhile, Virgin Money removed its entire range for new customers. Applications for mortgages which have already been submitted will be processed as normal and existing borrowers will still be able to transfer to a different deal.

Among other lenders, HSBC said it had no plans to change mortgage offers while NatWest said its rates were under ‘continual review in line with market conditions’.

David Hollingworth, of mortgage brokers L&C, said: ‘Volatile funding costs are forcing lenders to re-price their loans. That’s been true all year but that volatility received a turbo-boost as markets react to last week’s events. As a result, more are taking the decision to step back until the dust settles.’

He added: ‘Strong demand for fixed deals as borrowers look to batten down the hatches poses another issue as if they get the pricing wrong they could be swamped with applications which they are not able to process efficiently.’

Experts have warned that middle-class homeowners who stretched themselves to buy bigger homes could be among the worst-hit by soaring mortgage costs.

Mortgage broker Rachel Dixon said: ‘Middle-income families, who don’t always benefit from financial help from the Government, will be the most impacted.

‘These families are already squeezed with the cost of living, so this will just be another added burden for them.’

Mortgage companies are also now factoring in higher household bills when calculating how much homeowners can afford to borrow – which could make it even harder to find a competitive deal.

And they are becoming increasingly cautious about lending to those individuals they deem riskier, such as first-time buyers with small deposits and the self-employed.

Aneisha Beveridge, head of research at estate agent Hamptons, said: ‘First-time buyers will be amongst the hardest hit by rising rates. Not only is inflation eroding their ability to save, but higher interest rates are also affecting how much they can afford to borrow.’

‘But what’s not in any doubt is that rates are on their way up and the more that inflationary forces build, the higher they are likely to go.’

The Pound fell dramatically in the wake of Kwasi Kwarteng’s mini-Budget, but the Bank of England stopped short of an emergency interest rate hike.

Governor Andrew Bailey issued a statement insisting Threadneedle Street ‘will not hesitate to act’, but did not pull the trigger on an increase that markets had anticipated.

The move came after Mr Kwarteng tried to calm market fears by announcing he will lay out fiscal rules on government debt as part of an Autumn Statement on November 23 – alongside a full independent assessment of the state’s books. 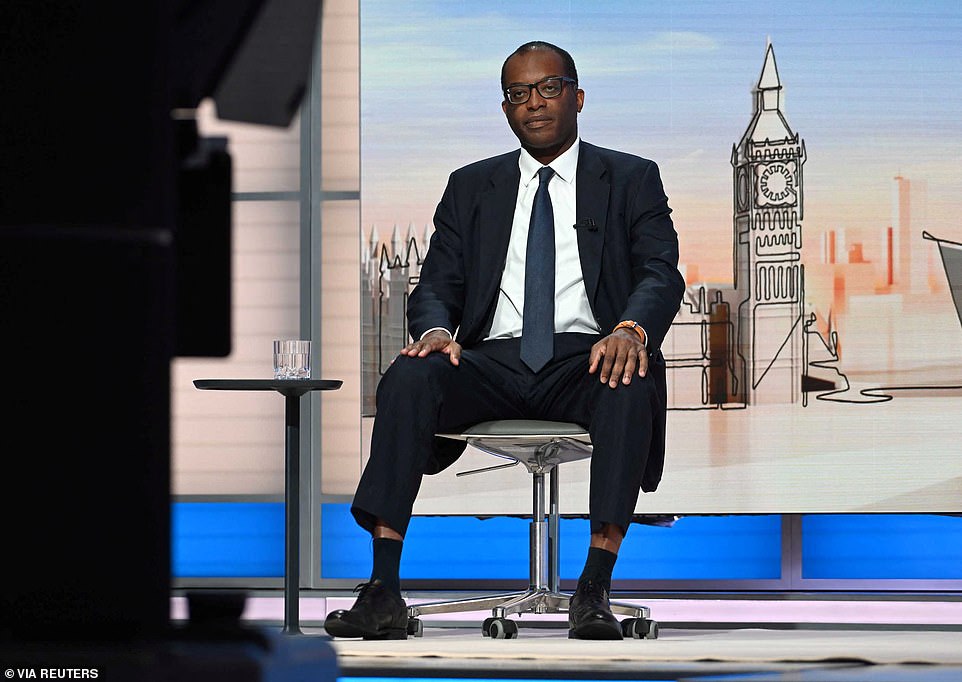 The Pound fell dramatically in the wake of Kwasi Kwarteng’s mini-Budget, but the Bank of England stopped short of an emergency interest rate hike 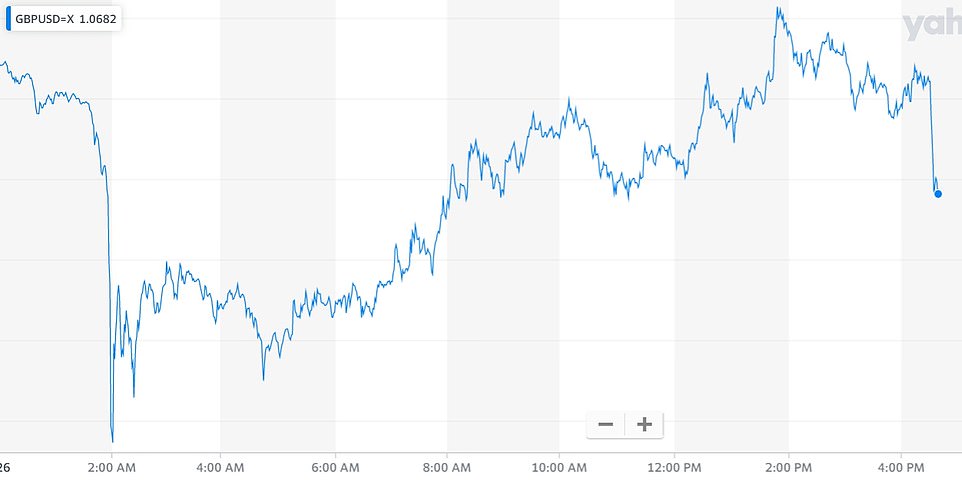 The Pounds clawed back ground by early afternoon, returning to just over $1.08 – but then tumbled again after the Bank of England stopped short of raising rates

On a rollercoaster day yesterday, Sterling dropped as low as just $1.0327, briefly returned to just over $1.08. before going quickly went back down to $1.06.

Because many key commodities are priced in dollars, a weak pound drives inflation up further. Markets are now pricing in the headline interest rate reaching 6 per cent by next year, heaping more misery on families.

The cost of government borrowing also rose to the highest rate in a decade – causing another headache for Mr Kwarteng as he is using extra debt to fund tax cuts and the energy bills bailout.

However, he is refusing to change course, after insisting only yesterday that there are more tax cuts in the pipeline.

Mr Bailey said in his separate statement: ‘The Bank is monitoring developments in financial markets very closely in light of the significant repricing of financial assets.

‘In recent weeks, the Government has made a number of important announcements. The Government’s Energy Price Guarantee will reduce the near-term peak in inflation. Last Friday the Government announced its Growth Plan, on which the Chancellor has provided further detail in his statement today.

‘I welcome the Government’s commitment to sustainable economic growth, and to the role of the Office for Budget Responsibility in its assessment of prospects for the economy and public finances.

‘The role of monetary policy is to ensure that demand does not get ahead of supply in a way that leads to more inflation over the medium term. As the MPC has made clear, it will make a full assessment at its next scheduled meeting of the impact on demand and inflation from the Government’s announcements, and the fall in sterling, and act accordingly.

‘The MPC will not hesitate to change interest rates by as much as needed to return inflation to the 2 per cent target sustainably in the medium term, in line with its remit.’