This is the moment a group of men brawled in the street and threw punches at each other after a fight broke out in front of shocked families and children in a seaside town.

Footage of the incident, which was shared online, shows the men fighting in a car park in East Beach, Shoeburyness, near Southend, Essex.

The vicious attack is thought to have happened just before 8.30pm last night in front of stunned members of the public at the popular beach resort.

Police are investigating the incident, although they have not yet made any arrests or found the alleged victim.

The video starts with two men confronting each other in the car park, while a third man stands between them in an effort to calm them down.

Cars can be seen driving past and other members of the public walking by as the situation escalates. 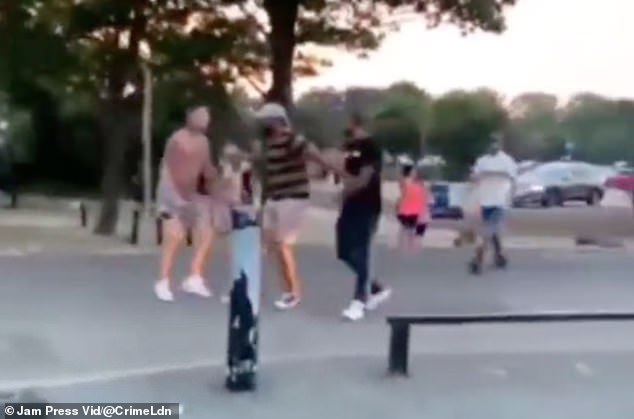 The video starts showing a topless man and a man in a black shirt arguing, with a third man trying to calm the situation 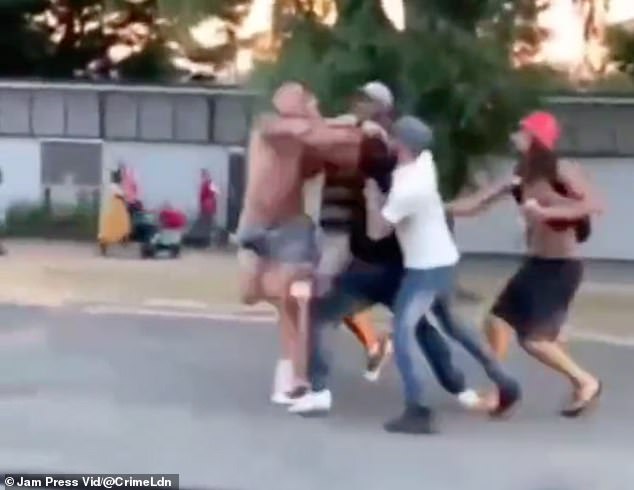 The man wearing the black shirt is then attacked from behind by a fourth man, while the shirtless man punches him at the same time 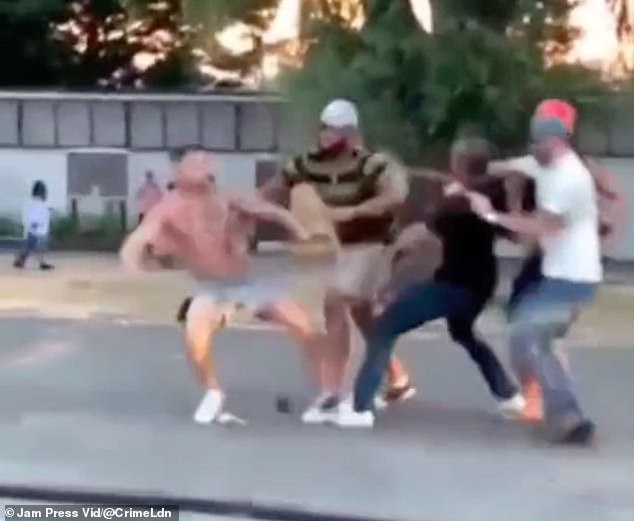 The fourth person, who is wearing a white shirt, drags him to the ground from behind

One of the men, who is shirtless, squares up to him and throws a punch just as a fourth man comes from behind and attacks the same person.

The man who was targeted by the two attackers is then dragged to the ground, where they start punching him.

People can be heard screaming in the background as a crowd begins to form, including several children.

Moments later, the man who was attacked is seen being helped by bystanders while a visibly upset woman with a child approaches.

The man remains on the ground and the extent of his injuries is not clear, as people rush over to help him.

The shirtless man is still at the scene and a furious woman approaches him before slapping him in the face.

He pushes her away, as other bystanders come over to help to create distance between the victim and his attacker.

Police say they have not found the alleged attackers and victim from the video yet.

A spokesperson for Essex Police said: ‘We are aware of a video circulating online of an incident in Shoebury.

‘An incident was reported to us by colleagues in the ambulance service in East Beach, shortly before 8.30pm last night, Sunday 14 August.

‘It was reported that a man had been assaulted by another man. Both men are then reported to have left the scene.

‘We arrived and carried out a search of the area but could not locate a victim or a suspect. Our enquiries are continuing today.

‘Anyone with information about the incident, or who has footage of it which has not yet been passed to us, is asked to contact us as soon as possible. Please quote incident 1397 of August 14.

‘You can submit a report on our website or by using our online Live Chat service available Monday to Friday (excluding public holidays) between 10am-9pm. Alternatively, you can call us on 101.

East of England Ambulance Service has been contacted for comment.