US denies ‘preposterous’ claim they ‘sabotaged’ Nord Stream 2 – as Trump shares video of Biden promising to ‘bring an end’ to pipeline and asks ‘World War III anyone?’ 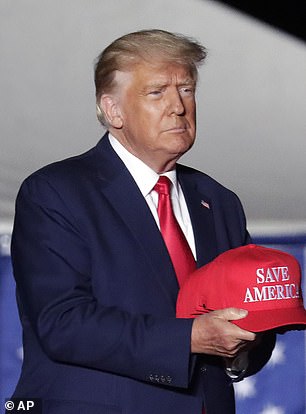 Donald Trump shared a video on Wednesday of President Joe Biden warning that he could try to ‘stop’ the Nord Stream 2 pipeline in early February if Russia invaded Ukraine. The same video was used by the Kremlin to suggest Biden was behind the recent leaks

The US government is denying ‘preposterous’ allegations that it is behind a gas leak in the Baltic Sea on Wednesday.

It comes as Donald Trump suggested that ‘World War III’ could be near while sharing a video of President Joe Biden threatening to stop Russia’s Nord Stream 2 gas pipeline.

Mysterious and alarming leaks were found in both Nord Stream pipelines this week, prompting the European Union to call it the result of a ‘deliberate act.’

Multiple accusations have already been lobbed at the Kremlin amid ever-growing hostilities over its illegal invasion of Ukraine.

Meanwhile Moscow is pointing the finger at the United States, declaring that Washington is ‘obliged’ to explain its alleged role in the ‘sabotage.’

A US official denied the accusations, according to the Washington Post. DailyMail.com has reached out to the White House for comment.

Trump also appeared to back Russia’s theory on Wednesday when he posted on his Truth Social app a video of Biden from early February pledging to ‘bring an end to’ Nord Stream 2 if Vladimir Putin’s forces invaded Ukraine.

‘Wow, what a statement. World War III anyone?’ Trump wrote along with the video.

The same video was also shared by the Russian government on Wednesday while suggesting Biden was behind the explosions that led to the Baltic Sea leaks.

Asked for clarification on his stance, Trump’s spokesman Taylor Budowich said ‘the statements speak for themselves.’

He also referred DailyMail.com to an earlier post where Trump offered to lead negotiations between Russia and Ukraine while warning current US leaders to not ‘make matters worse.’

‘U.S. “Leadership” should remain “cool, calm, and dry” on the SABOTAGE of the Nord Stream Pipelines. This is a big event that should not entail a big solution, at least not yet,’ the former president wrote.

‘The Russia/Ukraine catastrophe should NEVER have happened, and would definitely not have happened if I were President. Do not make matters worse with the pipeline blowup.’ 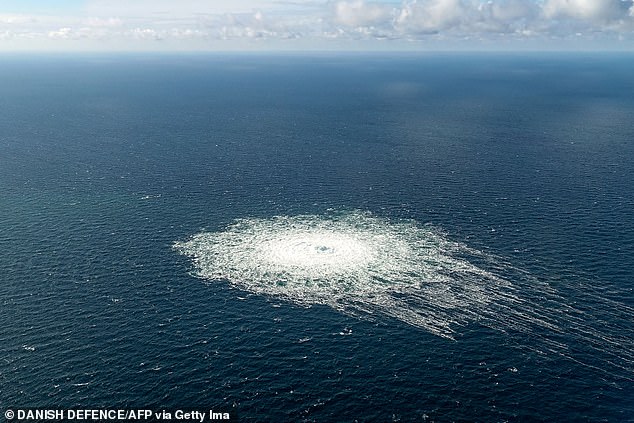 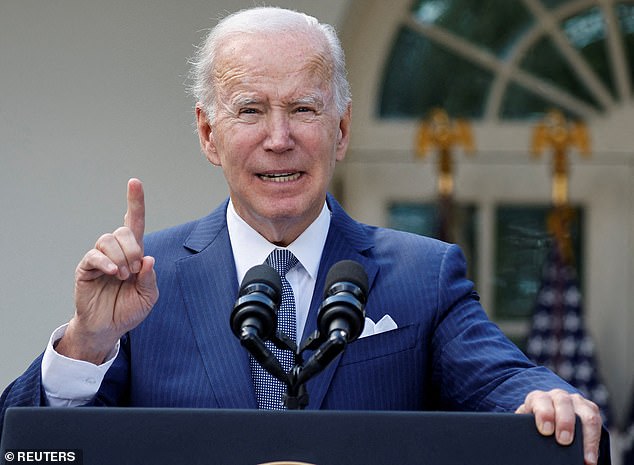 Biden said on February 7, 2022 that the Nord Stream 2 pipeline, which he waived sanctions on, could be stopped if Russia invaded Ukraine 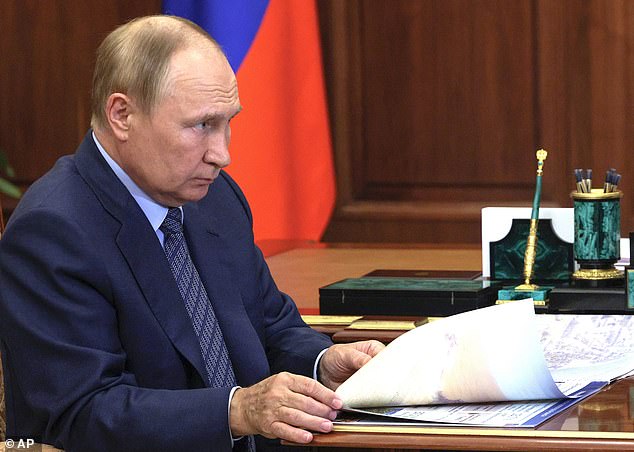 Russian President Vladimir Putin launched his brutal attack later that month. His government has been informally accused of being behind the pipeline leaks

He ended with, ‘Be strategic, be smart (brilliant!), get a negotiated deal done NOW. Both sides need and want it. The entire World is at stake. I will head up group???’

And just before that, Trump compared the pipelines’ gas leak to the potentially devastated storm heading for the state of Florida. He said Hurricane Ian was not as ‘important’ as the damage in Europe’s waters.

‘Everyone is talking about the big hurricane barreling into Florida, as they should be, but perhaps a far more important event in the longer term was the announcement that the Nord Stream I & II Pipelines out of Russia…has been SABOTAGED,’ he wrote in the earliest of the three posts.

‘This could lead to major escalation, or War!’

In that statement Trump also stated he brought the pipelines ‘to the World’s attention as President when I explained how crippling reliance on it could be for Germany and other parts of Europe.’

‘Everybody laughed at the time, but they are not laughing anymore!’ he wrote.

During his presidency Trump did approve sanctions on the Nord Stream 2 pipeline between Germany and Russia, which was near completion when the penalties were levied in December 2019. 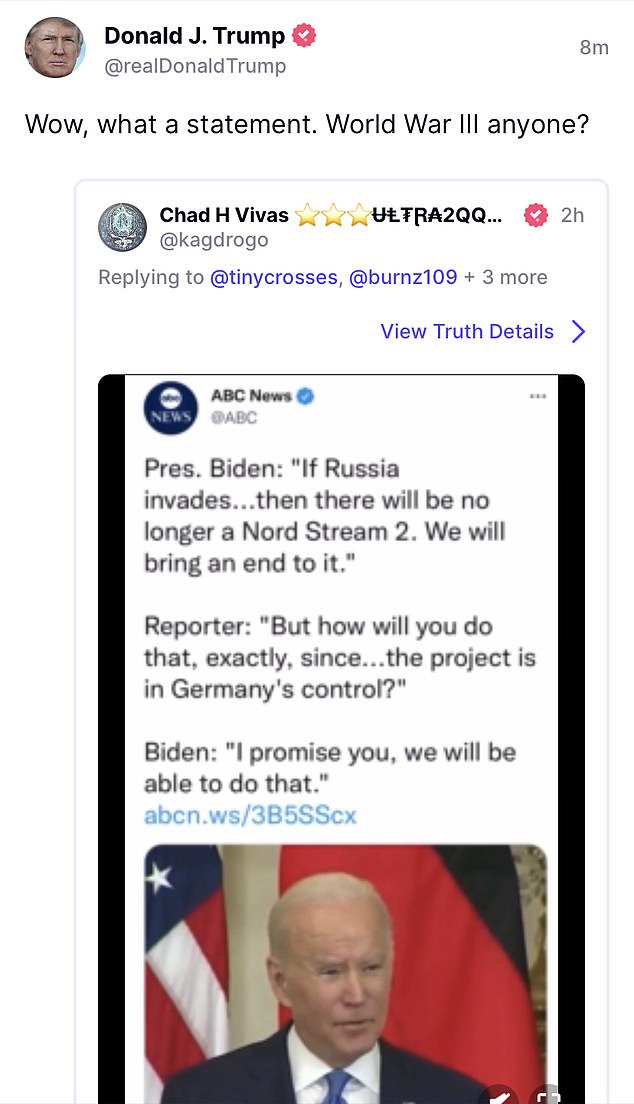 Trump captioned his re-Truth of Biden’s February comments with: ‘Wow, what a statement. World War III anyone?’ 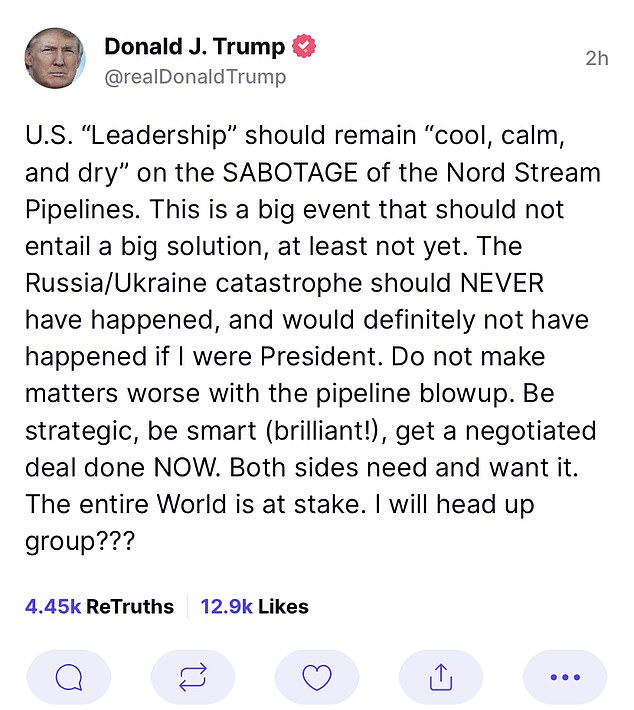 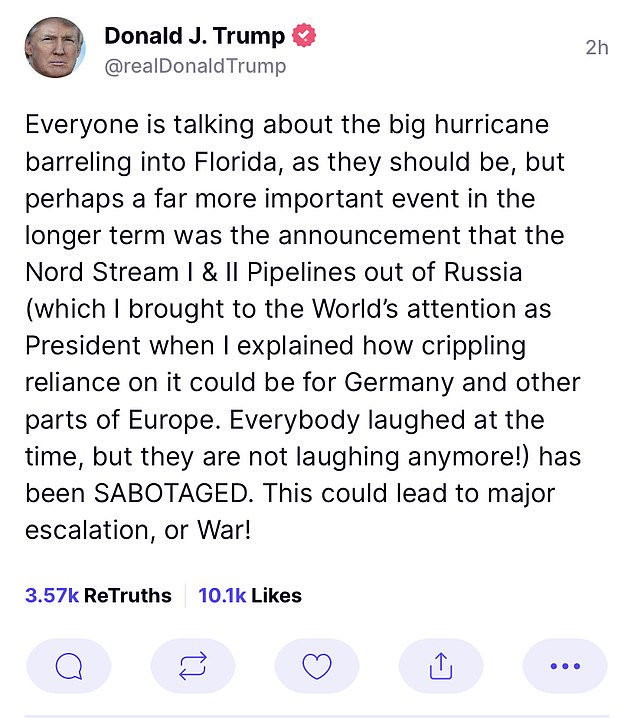 Biden waived US objection to the pipeline just several months into his White House term.

But it was soon halted again, this time by Germany, whose government canceled the plans in opposition to Russia recognizing parts of eastern Ukraine as independent pro-Kremlin states.

Nord Stream 1 was similarly out of operation due to Russia’s war on Ukraine.

Though Nord Stream 2 never begun operations, it was full with gas by the time it was halted. Climate scientists fear the repercussions of the leak could be disastrous.

Sharing Biden’s early February warnings on stopping the pipeline, the Kremlin’s Foreign Ministry spokeswoman Maria Zakharova said on social media: ‘Biden is obliged to answer the question of whether the US carried out its threat.’

‘We must be responsible for our words,’ the Putin puppet said, according to the Associated Press. ‘Europe must know the truth.’