Truss enjoys day out with her teenage daughters at Commonwealth Games

Family day out! Tory leadership hopeful Liz Truss enjoys mother-daughter time with her two teenage girls – who both work for her campaign’s digital team – as they watch the action at the Commonwealth Games

Liz Truss enjoyed some family time yesterday on day 9 of the Commonwealth Games in Birmingham amid her Tory leadership campaign battle with former Chancellor Rishi Sunak.

The foreign secretary was pictured in the stands at the Alexander Arena alongside her teenage daughters Frances, 16, and Liberty, 13, as the trio benefitted from some mother-daughter time while taking in the action on the athletics track.

They were joined by Ms Truss’ husband Hugh O’Leary, whom the foreign secretary married in 2000, and Andy Street, a Conservative party politician and West Midlands Mayor.

The group were seen delighting in the action, laughing and joking among themselves and cheering on the competition on track in what was likely a much needed break from the campaign trail.

Ms Truss revealed last month her two teenage daughters are involved in managing her social media campaign amid the Tory leadership race, telling the Telegraph: ‘My oldest daughter’s working on the digital team.

‘She’s done a computing GCSE so she’s helping out on that. And my younger daughter was there as well, giving general political advice.’

Later on Saturday however, Ms Truss was right back to work, calling on the Conservative Party to ‘unite’ to take on Keir Starmer’s Labour as 21 current and former Cabinet ministers issued a declaration of support for her. 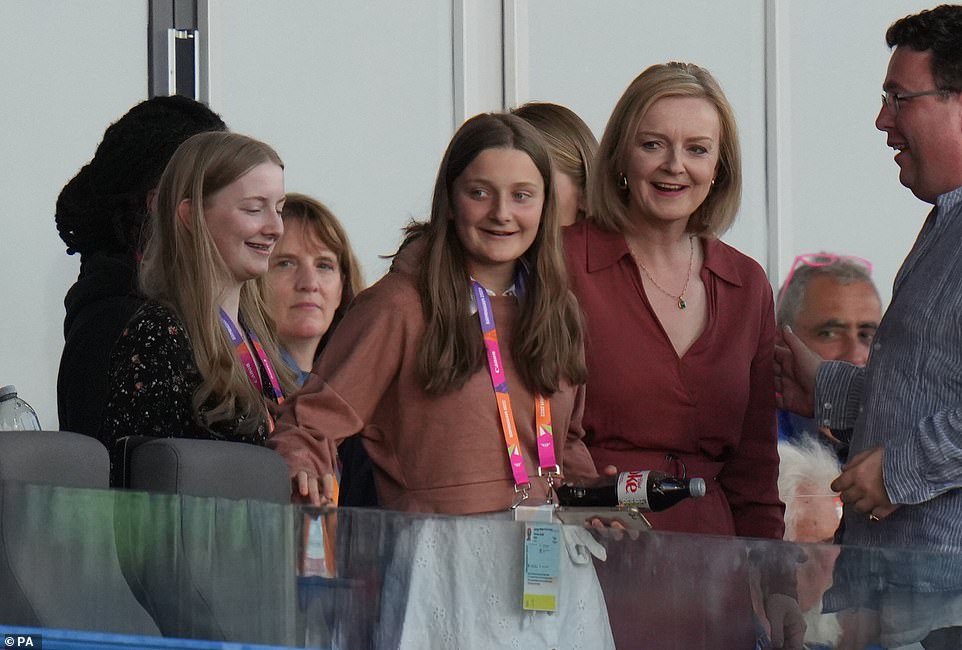 Liz Truss at Alexander Stadium to watch the athletics, with her daughters Frances, 16 (centre), and Liberty, 13 (left), on day nine of the 2022 Commonwealth Games in Birmingham 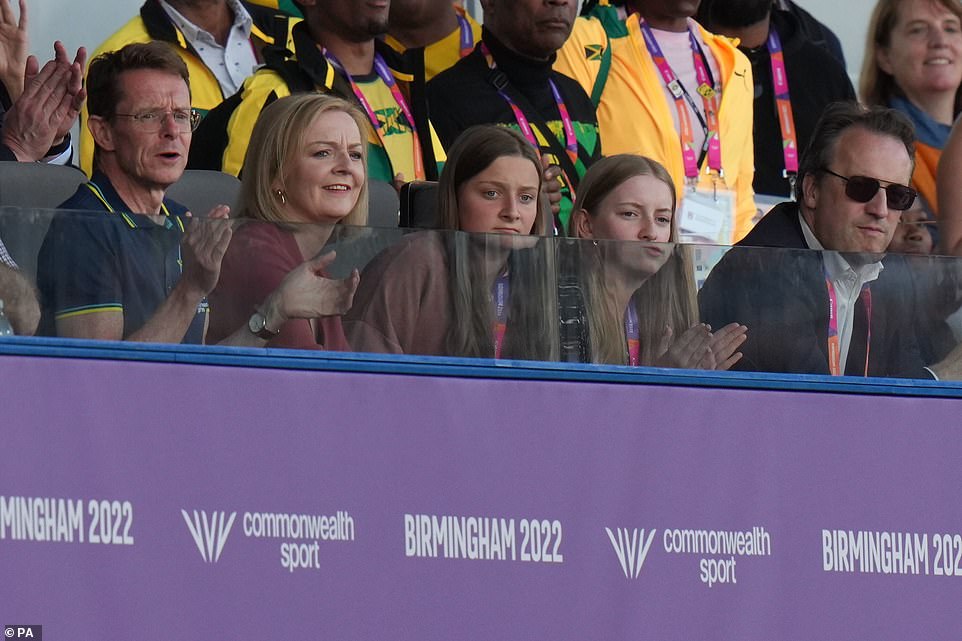 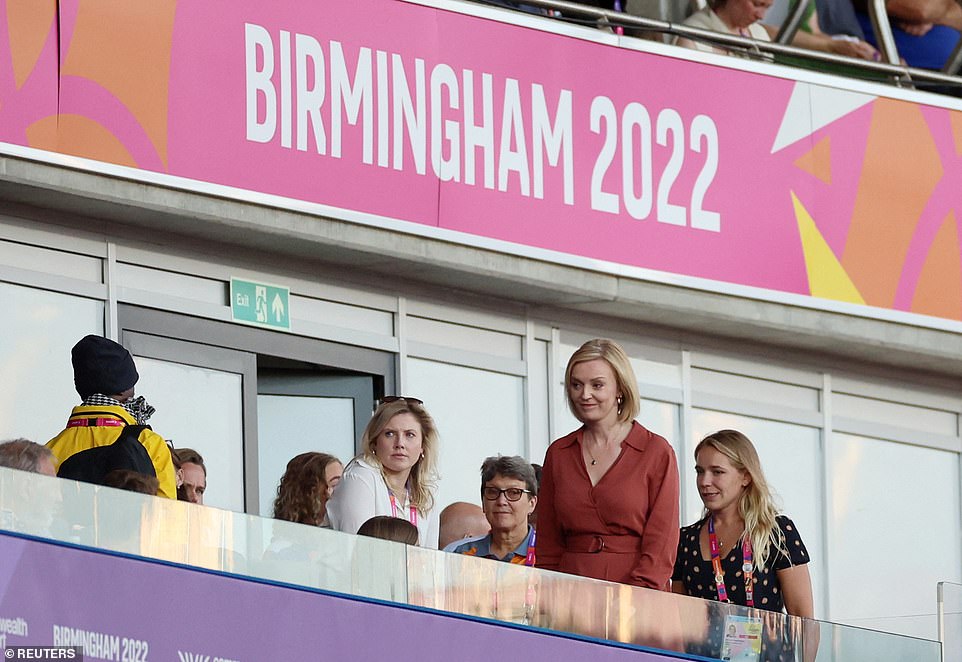 Britain’s Conservative Party leadership candidate Liz Truss is seen arriving in the stands of Birmingham’s Alexander Stadium on Saturday, Aug 6 for day 9 of the Commonwealth Games 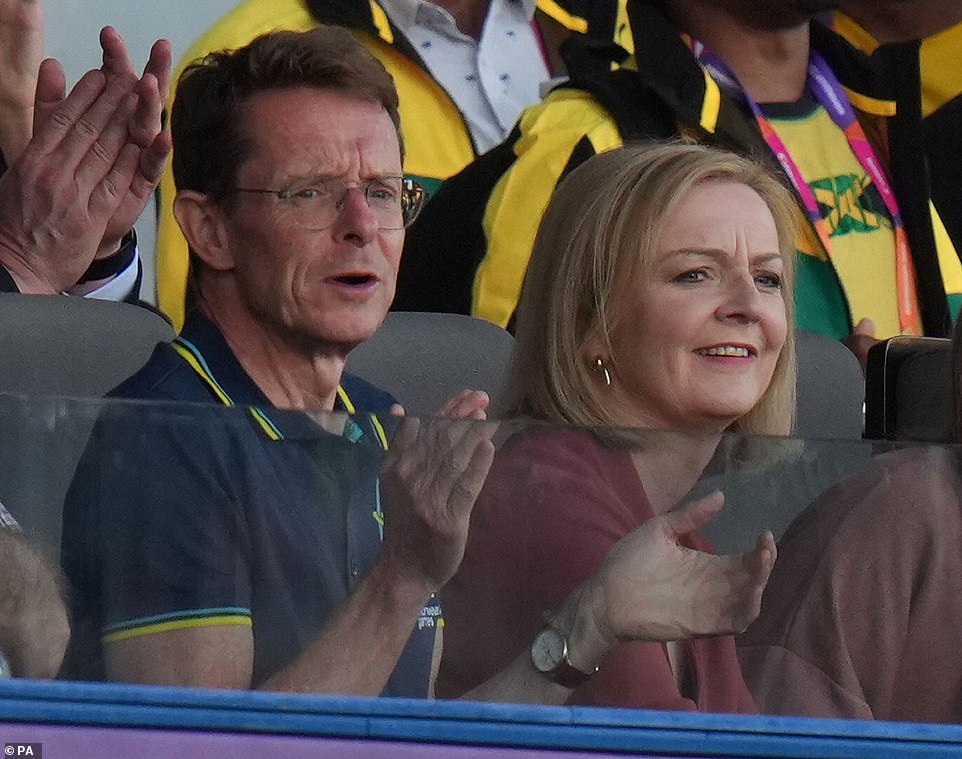 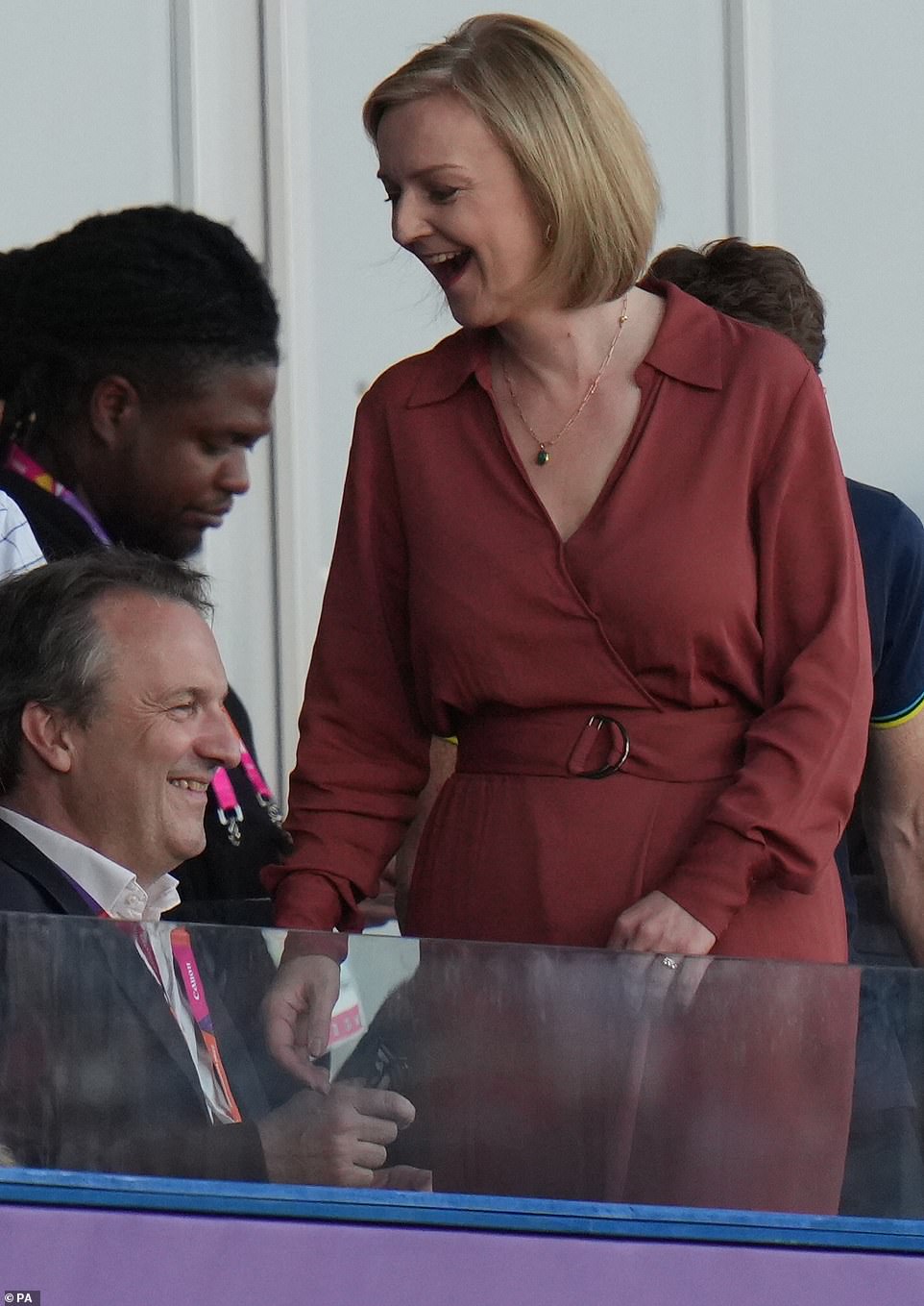 The foreign secretary is a firm favourite to succeed Boris Johnson as Prime Minister, and she appeared to put further pressure on her rival Rishi Sunak to stand down last night as she shared the open letter from some of her prominent backers, including Lord Frost, defence secretary Ben Wallace and Sir Iain Duncan Smith.

The signatories, which include ten sitting and 11 past Cabinet ministers, argued that only Ms Truss ‘has what it takes’ and would break from the ‘tired economic managerialism of the past’ in a thinly veiled swipe at the former chancellor.

Last night, senior Tory Nusrat Ghani endorsed Ms Truss after weeks of remaining neutral in the leadership contest. Introducing her to the hustings in Eastbourne, East Sussex, the 1922 Committee vice-chairman cited Ms Truss’s record as Foreign Secretary and ability to unite the party.

The letter was released as Mr Sunak’s campaign appeared to stall, with his last high-profile supporters – Dominic Raab and Grant Shapps – emerging three weeks ago.

In the past week, former Conservative leaders Lord Hague and Lord Howard have endorsed Mr Sunak.

But in their open letter, the 21 senior Tories say Miss Truss’s record as Foreign Secretary and low-tax promises should see her become prime minister.

They wrote: ‘For us, there is only one candidate who has what it takes: Liz Truss. She has shown she will do what is necessary and right, even in the face of great adversity.

‘In challenging times, Britain needs a prime minister who can be trusted to deliver. Liz has a clear plan to grow our economy, founded on true Conservative principles of aspiration, enterprise and freedom, which will help fund our public services and NHS.’

It comes as Ms Truss today pledged to ‘immediately’ cut taxes if she wins the race for No 10, accelerating the reversal of the National Insurance rate rise by six months. 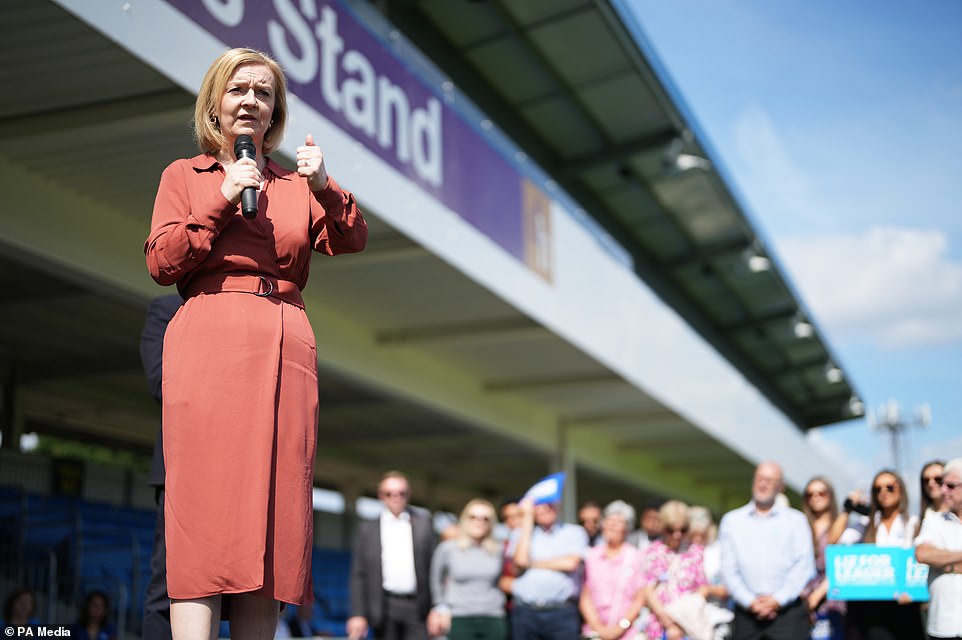 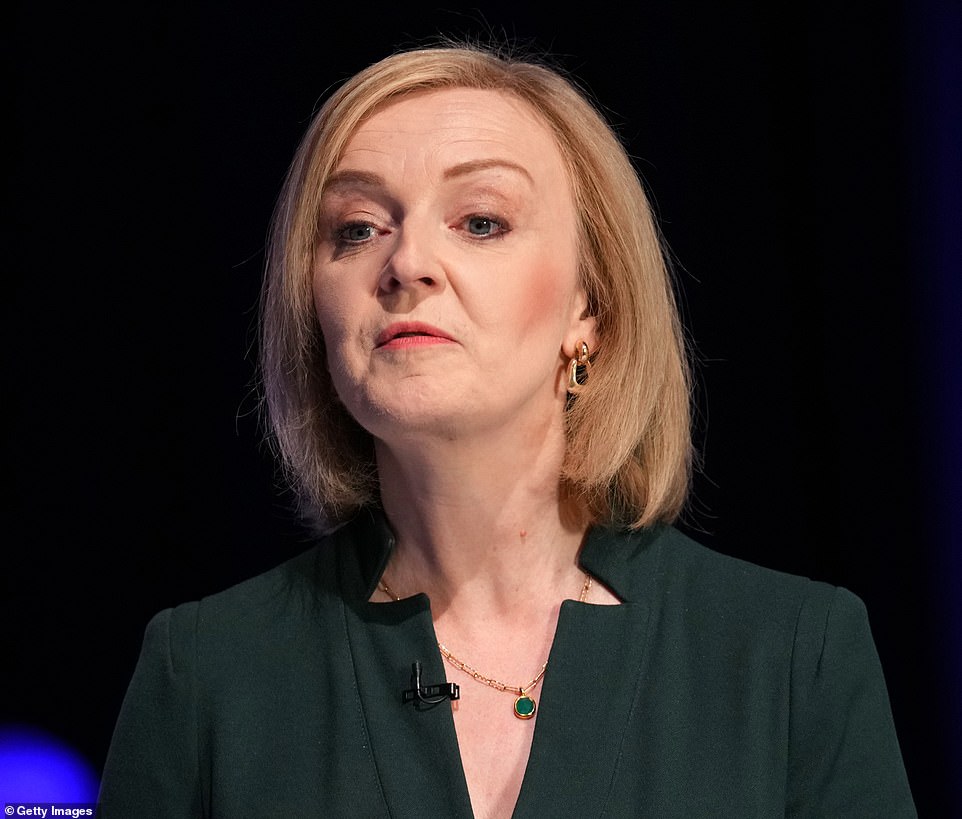 The Foreign Secretary, firm favourite to succeed Boris Johnson, appeared to put pressure on her rival Rishi Sunak to stand down as she shared the open letter last night from some of her prominent backers, including Lord Frost, Defence Secretary Ben Wallace and Sir Iain Duncan Smith

The Tory leadership contender said she would use a September emergency budget to scrap the increase brought in by her rival Rishi Sunak when he was chancellor.

She would seek to implement the change within days, rather than wait until April in line with usual Treasury rules, it is understood.

But Mr Sunak has contrasted his ‘clear-eyed realism’ with Ms Truss’s ‘starry-eyed boosterism’, arguing that her promised tax cuts would further fuel inflation and fail to help the most vulnerable.

The two candidates vying to replace Boris Johnson as prime minister continue to clash over their plans to help households with spiralling bills after the Bank of England warned that the UK would fall into the longest recession since the financial crisis, with inflation set to soar to more than 13 per cent.

There are growing calls for the new premier to urgently increase the amount of support available to the most vulnerable families, with a new report commissioned by former prime minister Gordon Brown suggesting Government help has failed to address their needs. 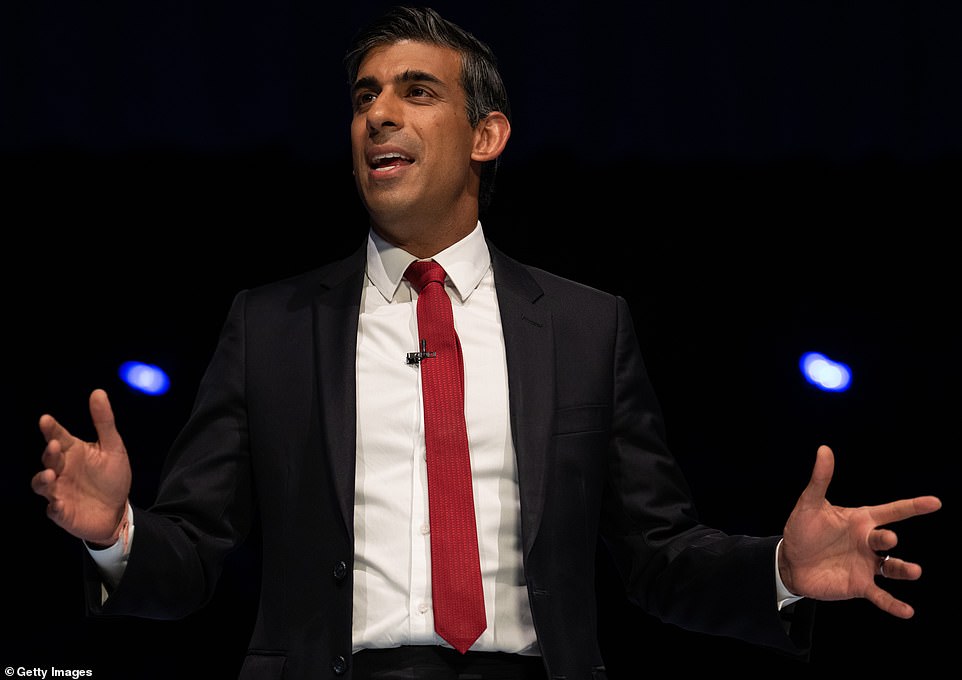 ‘Despite the Bank of England’s stark assessment this week, I do not believe in resigning our great country to managed decline or accepting the inevitability of a recession,’ the Foreign Secretary wrote in The Sunday Telegraph.

‘I would hit the ground running by bringing in an emergency budget, charting a firm course to get our economy growing in order to help fund our public services and NHS.

‘I would use this to immediately tackle the cost-of-living crisis by cutting taxes, reversing the rise on national insurance and suspending the green levy on energy bills’.

She told the Financial Times: ‘Of course, I will look at what more can be done.

‘But the way I would do things is in a Conservative way of lowering the tax burden, not giving out handouts.’

Mr Sunak hit back at her comments, saying: ‘It’s simply wrong to rule out further direct support at this time as Liz Truss has done, and what’s more, her tax proposals are not going to help very significantly people like pensioners or those on low incomes who are exactly the kind of families that are going to need help.’