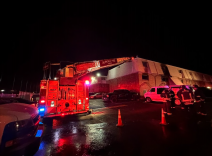 Two people were taken to a local hospital and five families have been displaced by a two-alarm fire at an Aurora apartment complex.

At about 3 a.m. Saturday Aurora Fire Rescue responded to the 15800 block of East 13th Place and found people trapped on the upper floors of a three-story, multi-residential building, the fire department said. Several residents were rescued, including a woman and an infant who were brought out of a window. Firefighters arrived at the scene to find “heavy fire and blackout smoke conditions”  which had trapped some residents.

Four people were evaluated by emergency responders on scene and two of those people were taken to a hospital with injuries that are not life threatening, AFR said.

Five families displaced by the fire are being assisted by American Red Cross of Colorado. The cause of the fire is under investigation.