A former CIA director warned that the US and NATO allies would destroy Russian forces if Russian President Vladimir Putin used nuclear weapons in his war with Ukraine.

David Petraeus appeared on ABC’s ‘This Week’ Sunday, where he said the nuclear threats by Putin need to be taken seriously, and that the ruler is ‘desperate’ as the ‘battlefield reality he faces is irreversible.’

Putin signed a decree earlier this week to illegally annex parts of Ukraine. Days later, however, Russia was forced to withdraw troops from the strategically important Lyman – located in one of the four Ukrainian regions that Russia annexed.

While signing the decree, Putin also condemned the ‘Satanic’ West and vowed to use all of the Kremlin’s might to protect Russia’s new territory. The remark was widely seen as a nuclear threat.

Petraeus said that, even though Ukraine is not a NATO country, a ‘US and NATO response’ would be in order.

He told host Jonathan Karl that the likelihood that radiation from a nuclear weapon would extend to a NATO country could perhaps be construed as an attack on a NATO member.

‘This is so horrific that there has to be a response – it cannot go unanswered.’

‘Just to give you a hypothetical, we would respond by leading a NATO – a collective – effort that would take out every Russian conventional force that we can see and identify on the battlefield in and also in Crimea and every ship in the Black Sea.’ 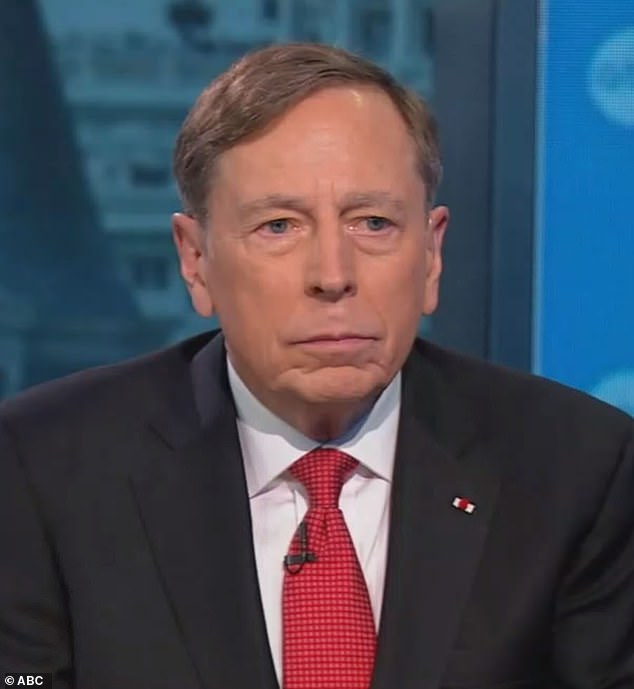 Ukraine claimed full control of the eastern logistics hub of Lyman on Sunday. The area is it most significant battlefield gain from Russia in weeks, providing a potential staging post for further attacks to the east while heaping further pressure on the Kremlin.

Russia likely experienced heavy casualties during the withdrawal. Russia had 5,000 to 5,500 troops in the town before the Ukrainian attack, a Ukrainian military spokesman said on Saturday.

More than 60,000 Russian troops have been killed in the war that is now entering its eighth month.

NATO Secretary General Jens Stoltenberg said the capture of the town, where Ukrainian flags were raised over civic buildings on Saturday, demonstrated that Ukraine is capable of dislodging Russian forces and showed the impact Ukraine’s deployment of advanced Western weapons was having on the conflict.

‘President Zelensky and Ukraine have mobilized vastly better than has Russia,’ Petraeus said on Sunday. ‘Ukraine has recruited, trained, equipped, organized and employed forces incomparably better than Russia has.’

‘The battlefield reality he faces is, I think, irreversible,’ he said. ‘No amount of shambolic mobilization, which is the only way to describe it; no amount of annexation; no amount of even veiled nuclear threats can actually get him out of this particular situation.

However, Petreaus pointed out that ‘Russia got hit by a thousand more individual, personal, and other sanctions’ in response to the annexation, ‘showing that the west still has more that can be done to Russia.’

He continued with a warning: ‘It can still get worse for Putin and for Russia. And even the use of tactical nuclear weapons on the battlefield won’t change this at all.’

But added: ‘You have to take the threat seriously.’

Petraeus also said he did not see how Russia could win at this point.

‘They cannot. There is nothing he [Putin] can do at this point.’ 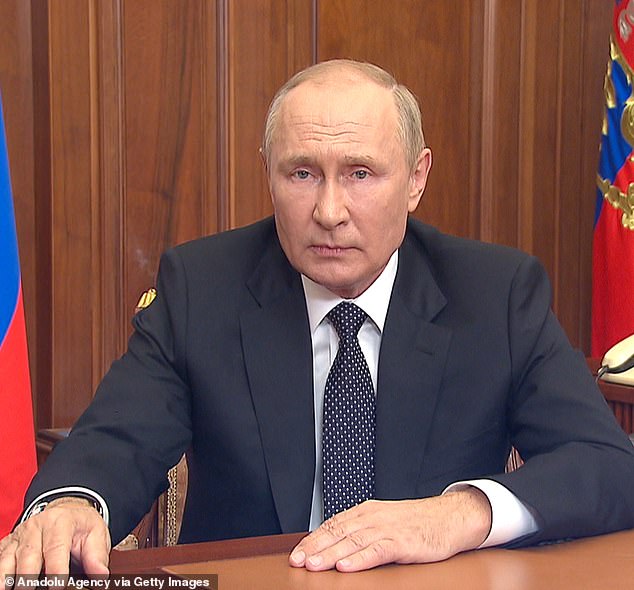 Petraeus’ remarks come after Putin on Friday proclaimed the annexation of four regions covering nearly a fifth of Ukraine, as the war enters its eighth month 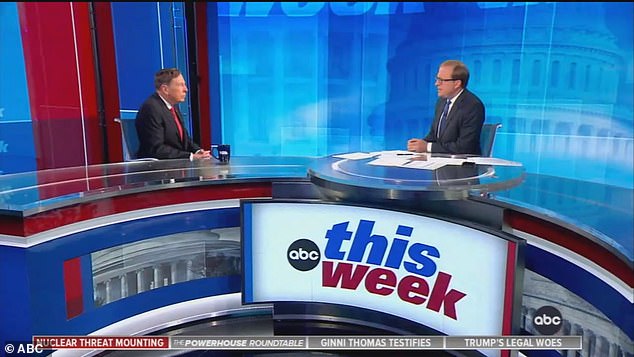 ‘There are no checks on Mr. Putin. Just as he made the irresponsible decision to invade Ukraine, you know, he could make another decision,’ Austin told Fareed Zakaria GPS.

‘But I don’t see anything right now that would lead me to believe that he has made such a decision.’

Videos appeared to show Russian troops forcing Ukrainian civilians to the ballot box at gunpoint to vote on whether to join Moscow’s jurisdiction.

‘As you’ve heard us say, this referendum is a sham. It’s fiction. And we will never respect their illegal annexation of Ukraine territory, and nor will most of the international community,’ Austin said on Sunday. 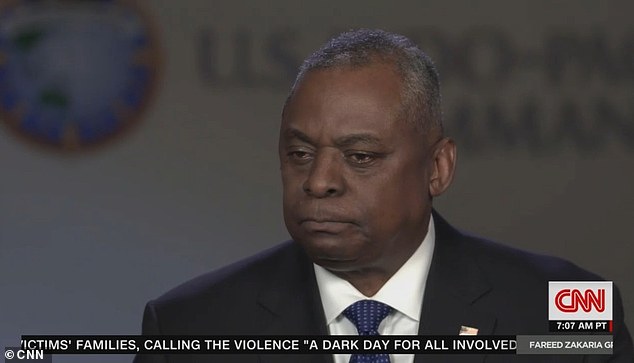 ‘This nuclear saber rattling is not the kind of thing that we would expect to hear from leaders of large countries with capability,’ the Pentagon chief said.

He acknowledged high-level talks between Washington and Moscow on matter, but Austin said he has not spoken to his Russian counterpart ‘in recent days.’

‘I have addressed this very issue and warned to not go down this path and conduct this type of irresponsible behavior,’ Austin said.

‘So, yes, I have done that in the past personally, but I’ve not talked to him recently.’ 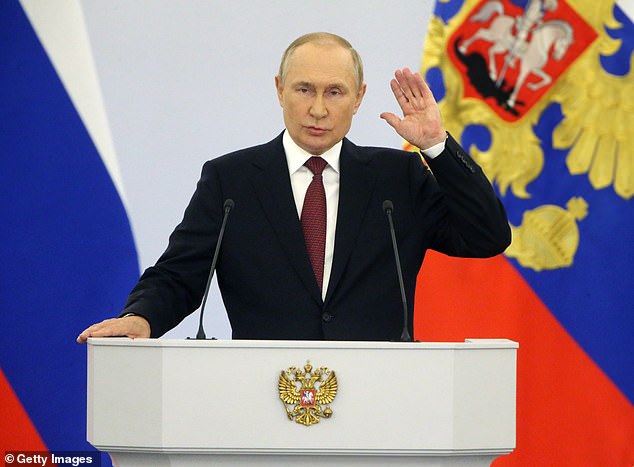 He also condemned Putin’s illegal annexation of parts of Ukraine, which followed a referendum that Austin called a ‘sham’

Petreaus told ABC that he had not spoken to national security adviser Jake Sullivan on the likely US response to nuclear escalation from Russia.

He explained that if Russian forces used nuclear weapons in Ukraine, it would not be a situation triggering the alliance’s Article 5, which calls for a collective defense. That is because Ukraine is not part of NATO – but still, a ‘US and NATO response’ would be in order.

The Ukrainian military said in its evening statement on Sunday that its forces had repelled Russian advances in several areas – particularly in the Donetsk region near Bakhmut and Spirne, just inside Donetsk region near Lysychansk, a major center in neighboring Luhansk region.

Russian forces had captured Lyman from Ukraine in May and had been using it as a logistics and transport hub for its operations in the north of the Donetsk region. Its recapture by Ukrainian troops is Russia’s largest battlefield loss since Ukraine’s lightning counteroffensive in the northeastern Kharkiv region in September.