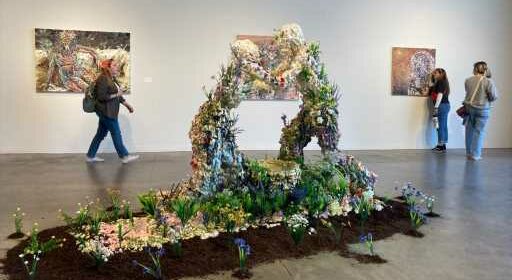 Sometimes art takes you to strange places. And it can happen when you least anticipate it — when you walk into a gallery or museum expecting something ordinary and, instead, get pulled into the imaginative world of an artist with something unique and amusing to say.

That happened to me twice last week. So, I thought I’d skip the usual single-exhibition review I do in this space most weeks and just tell you what I saw.

There is something quite brave about the artist Vinni Alfonso. He makes things that a lot of people would consider untidy or incoherent, troubling to look at, or even grotesque. Then he shows them off in public, demanding people look at them.

Alfonso globs acrylic paint on his canvases and three-dimensional objects — layers and layers of it — in dabs, clumps, swooshes and piles, instilling the surfaces of his works with an uneven, uneasy feel. His color choices are equally extreme. It’s not unusual for the most awful shades of mustard yellow, Easter egg purple, mint green and black to come at the viewer all at once.

But what might seem excessive actually feels essential in his creations, especially those assembled into his current exhibition, “Memento Amore” at RedLine Art Center.  His best paintings in this show are overloaded, and then some, with visceral emotions. One piece is called “Anger,” another “Denial,” and within those works are volumes of intensity. Brushstrokes of paint overlap, collide and fight with one another in an attempt to take up the most space on the canvas.

When recognizable images do come together in these pieces, it is in the most abstract of ways. Sometimes his works are figurative with heads and bodies that imply their humanity. Other times they look like aliens or monsters. Often they look like wild flora, untended gardens that explode in your face.

They are not easy to decipher, or consume, because they elicit emotional responses rather than intellectual ones. You are not sure what Alfonso wants you to feel but he wants you to experience it fully.

This starts at the beginning of “Memento Amore.” Visitors are greeted with the monumental piece titled “Thought Histories,” which consists of hundreds and hundreds of small works, maybe 6 inches by 8 inches, arranged in a grid that stretches 20 feet long and 8 feet high.

Each individual piece, we assume, represents a thought, though it is expressed in a single swoop of paint and usually in a single color. Each of these thoughts is incomplete, and unfinished, just a smudge of green or brown or magenta, without clear edges, that is applied to glossy photo paper.

The piece feels, in a sense, like the diagram of a mind as it goes through a single day. Ideas flicker in our brains and then disappear, replaced by another flicker. Then another. They connect but they are distinct.

To help make sense of it, Alfonso has complied all of the “thoughts” into a video, titled “Thought History Loop” that plays on a monitor hung on an adjacent wall. The video is basically a rapid-fire slide show of the smaller paintings — each appears for a few seconds, then it goes  —  effectively creating an animation of the way we process ideas over time.

It’s the most potent moment in the show and the best example of what Alfonso is trying to capture, which he describes in his artist statement as “the process of intentional memory making while staying grounded in the present.” It’s an exercise in self-actualization while acknowledging we don’t have total control over the way our brains operate.

Alfonso can push things beyond the tolerance level of most art fans. In the center of the gallery is a piece called “Fountain,” in which two life-size human figures face each other in some form of engagement. They may be hugging, they may be fighting, it’s hard to tell. It is an actual fountain with green water flowing from the figures and it sits on a pile of real dirt adorned with artificial flowers

The whole piece is covered in the sort of glop that is Alfonso’s trademark, some unknown clumpy material that makes them hideous and monster-like. And yet, they are also posed in a way that they stare at each other with intensity, as if they are trying to communicate something rather deep to one another.

There is a repulsive romance to the fountain that some will see as sincere and other will think is melodramatic. It could go either way and Alfonso is definitely taking his chances by making this the centerpiece of his exhibition. It tempts a visitor to look at the indulgent aspects of his work and to overlook its authenticity.

But it is refreshingly unfiltered and, like the rest of the show, daring in its way. This kind of art is a hard sell. It’s better than most of what I see in commercial galleries, though it’s hard to see a professional gallery taking it on; they are too afraid and rarely put in the sort of work that it takes to make art this unusual, this hand-made and raw, sellable.

In that way, “Memento Amore” is testimony for why nonprofit galleries are so crucial to the art eco-system. And there are two involved here, RedLine, which is giving it space, and Alto Gallery, which produced, not curated it, and is using Redline as an exhibition space this time around. It’s an accidental partnership that I hope continues.

But more than that, the exhibition gets at what it means to be an artist, to be driven to create the things your muse sets in your mind, even though people will think you are an odd character. Even when you are not sure about them yourself. I like to say that the most authentic artists make what they must and then show what they make. That’s the job. It’s not easy.

For 13 years, now artist Anuar Maauad has been conducting public workshops asking people to consider their own bodies — their shapes and curves, the size of their feet and heads, the length of their arms and the width of their shoulders.

He then asks them to make models of themselves out of clay. He has amassed 7,000 of these doll-sized objects which he keeps in something called “The Archeology Files.”

There’s a lightness to the sculptures, a hand-made, Play-Doh preciousness that recalls the stuff of childhood amusement. They are, in a way, adorable.

But, of course, there is so much more going on. Asking people to make models of their bodies is, indirectly, asking them to see themselves as others see them — or at least as they perceive others to see them, and that is a strange exercise. Even the most confident among us have mixed feelings about the way we look, quirky self-perceptions about everything from the bumps in our noses to the contours of our hips.

For his exhibition at Black Cube Headquarters in Englewood, titled “We Are Bodies,” Maauad amplifies these quirky things we think about ourselves. He has taken the models produced during a recent workshop in Denver and blown them up bigger-than-life size using a 3D printer.

The objects are full of exaggeration, elongated torsos and clunky heads, lumpy private parts and fat necks. Maauad has rendered them in all-white and placed them on elegant pedestals, inviting visitors to look at them as serious works of art.

Curator Cortney Lane Stell takes things a step further. She places them all under a bright, white, theatrical spotlight, so every crease and cranny of the pieces is multiplied ten-fold. The whole exhibition feels like a live, show-biz production.

In that way, this exhibition entertains, as well as enlightens. Visitors get to walk around the objects and see them from all sides. Each of the 10 sculptures on display takes on a personality of its own, becoming characters in some well-written play, full of both admirable qualities and imperfections.

And for objects made of plastic, they retain an impressive amount of humanity, enough that a viewer embraces them beyond their physical appearances and starts to appreciate what they have in common — and what the viewer has in common with them: quirkiness, strength, vulnerability.

That sounds heavy-headed and bit sentimental, and to be clear, this show is neither of those things. It has hard edges, harsh lighting and it’s a bit grotesque. But it does encourage visitors to consider that we are all basically, in general, the same on the outside — two eyes, two ears, maybe an over-sized nose — and that consuming ourselves with how we look is not in our best interest.

“We Are Bodies “ continues through Feb. 10 at Black Cube, 2925 S. Umatilla St., Englewood. It’s free and open to the public by appointment. blackcube.art