Wedding is cancelled because venue will be used for asylum seekers

A couple told of their devastation today after their wedding in a luxury hotel 300 miles from the English Channel was cancelled due to the venue being booked by officials to house asylum seekers.

Simon Pritchard and Lucy Campbell, 28, were just five weeks away from tying the knot at the four-star Hilton Garden Inn in Snowdonia before being informed via Zoom the event had been called off.

Reacting to the news, Ms Campbell said: ‘When we were told the venue was being cancelled, we were both completely gobsmacked. We’d been counting down the days for the wedding to happen. When they told us, we just couldn’t believe it, especially the reason they gave us.’

A series of local councils are now taking legal action against the Home Office to stop the Government using hotels in their areas. 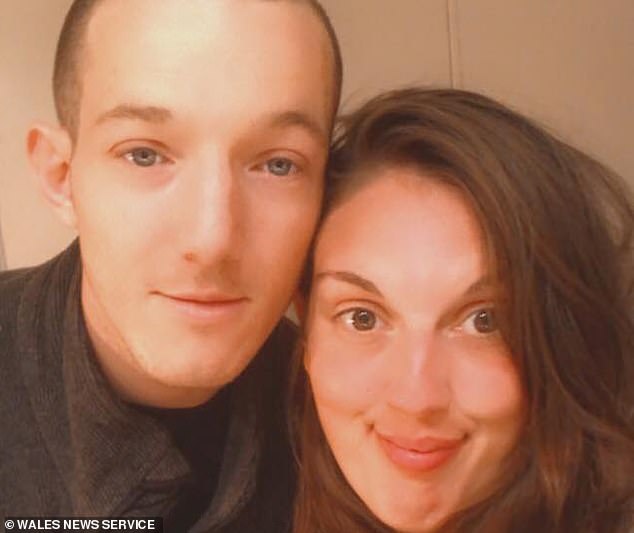 Simon Pritchard and Lucy Campbell, 28, were just five weeks away from tying the knot at the four-star Hilton Garden Inn in Snowdonia before hearing the event had been cancelled 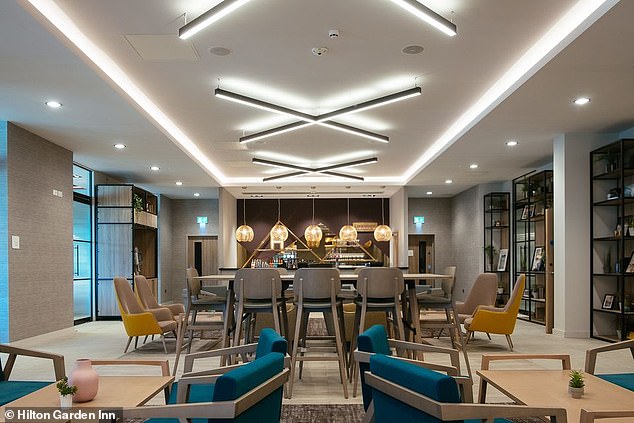 The four-star Hilton Garden Inn is part of the Adventure Parc Snowdonia resort in Dolgarrog, Conwy

Yesterday, immigration minister Robert Jenrick said this was only a temporary measure and officials are urgently looking for more basic accommodation.

He said: ‘The hotels are not a sustainable answer, we want to ensure we exit the hotels as quickly as possible and to do that we will need to disperse individuals to other forms of accommodation.

‘We may need to take some larger sites to provide decent but basic accommodation and of course we will need to get through the backlog so that we can get more people out of the system.’

Using campsites is one of the options being considered, according to The Sun.

Mr Pritchard and Ms Campbell, from Towyn, Conwy, were due to marry in front of their three children on December 10.

They had made the booking a year ago, but were told on Saturday it had been cancelled.

Ms Campbell said: ‘I don’t blame the staff, the people who had to tell me. It was out of their hands. But I’m not sure how to take the claim that the hotel had no choice in the matter, that the Home Office simply demanded it.’

The couple are now in a race against time to find a new venue because they must give Llandudno Registry Office 28 days’ notice of their intentions to switch venue. 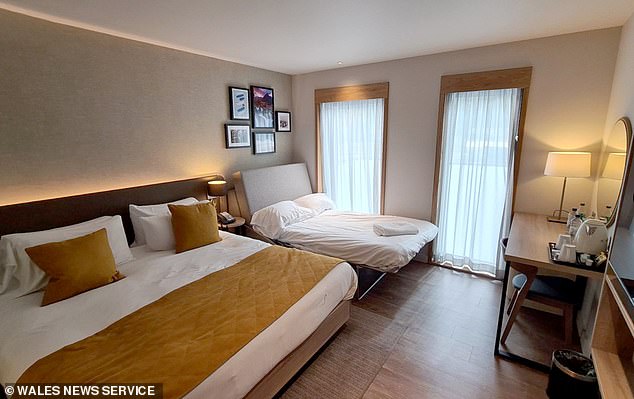 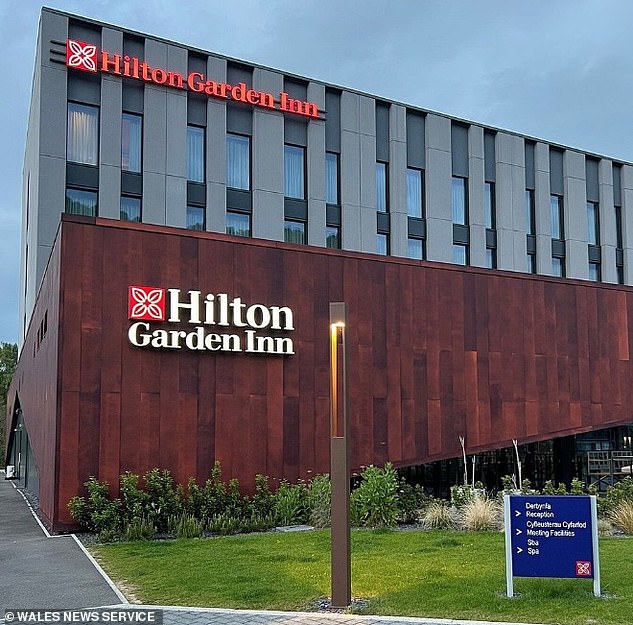 A Home Office spokesman said: ‘The use of hotels is a short-term solution and we are working hard with local authorities to find appropriate accommodation’

Local Conservative MP Robin Millar has criticised the use of the £146 to £300 a night to house asylum seekers and promised to raise the issue with Home Office ministers.

He said: ‘I will be clear. I am concerned about the suitability of this property, in this location, for this purpose. It is a hotel not a detention centre. It is isolated and unsupported by the appropriate services.’

It comes as another council announced it is taking legal action to stop the Government from using a hotel to house asylum seekers.

Fenland District Council said the Rose and Crown Hotel in Wisbech, Cambridgeshire suddenly closed to the public on Friday afternoon. Late that evening Serco, the contractor which runs the Home Office’s asylum-seeker operation, informed the council of its plans for the building. 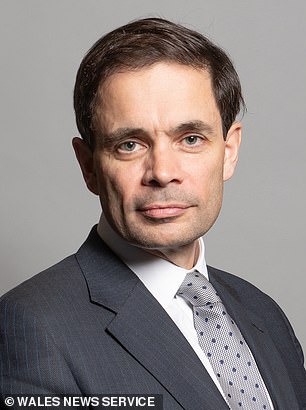 Yesterday, the council filed an application for an interim injunction at the High Court to stop the hotel in Market Place from being used to house asylum seekers.

Cllr Chris Boden, leader of Fenland District Council, said: ‘It is thoroughly irresponsible of the Home Office to consider placing vulnerable people with no recourse to public funding in a town such as Wisbech, without any consultation or any consideration of the impact this will have on the asylum seekers themselves.

‘We are in a rural location, with very limited hotel accommodation and transport links, and we already have significant issues with migrant exploitation and human-trafficking, which would put any people placed here at risk.’

The council said the change of use from a hotel to a hostel is a breach of planning law and the harm arising from such a breach is ‘significant’.

The authority said it was ‘disappointing’ that Serco had failed to notify it of its plans earlier to allow discussions over locations to take place.

District councillor for Medworth Steve Tierney said: ‘As councillor for the area where the Rose and Crown Hotel is located, I am deeply concerned about the plan to house asylum seekers there.

‘There are other places which are much better placed to give these vulnerable people the support they need.’ 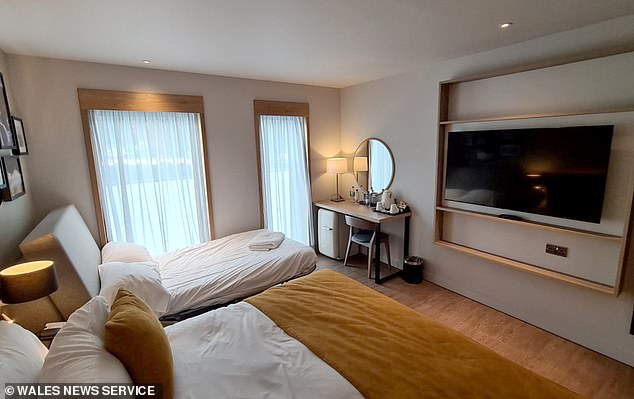 Mr Pritchard and Ms Campbell, from Towyn, Conwy, were due to marry in front of their three children on December 10. They had made the booking a year ago, but were told on Saturday it had been cancelled

Samantha Hoy, the council’s cabinet member for housing, said: ‘We fully understand the concerns about local hotels being used to house asylum seekers and would urge the Home Office to consider more suitable locations where any new arrivals would not be subject to the level of potential harm.’

A Home Office spokesman said in a previous statement: ‘The number of people arriving in the UK who seek asylum and require accommodation has reached record levels, placing unprecedented pressures on the asylum system.

‘The Home Office and partners identify sites for accommodation based on whether they are safe and available.

‘While we accept that hotels do not provide a long-term solution, they do offer safe, secure and clean accommodation, and we are working hard with local authorities to find appropriate accommodation during this challenging time.’

A spokeswoman for Hilton said: ‘The hotel has informed us it is closed to the public to support a Government contract.’ 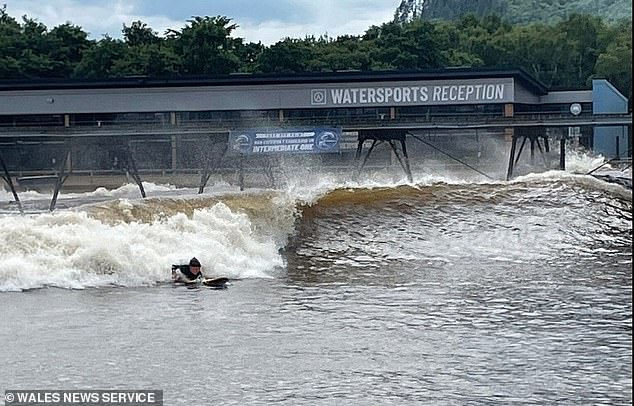 The hotel is part of the Adventure Park Snowdonia, which includes an inland surf wave 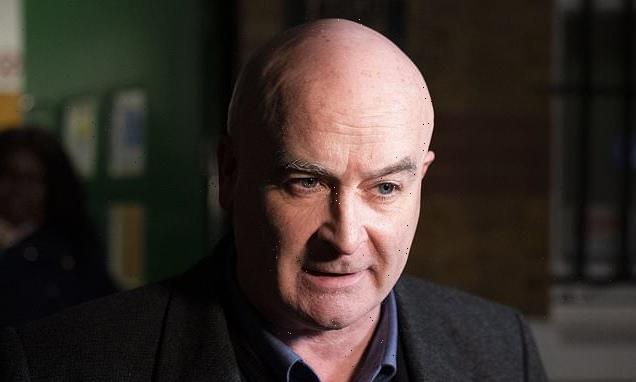