The White House on Monday cited some of its past successes as it played down a new New York Times/Siena College poll showing President Joe Biden’s approval rating almost scraping 30% — and Democrats pushing, at this point some two years out, for a different candidate in the 2024 race.

White House press secretary Karine Jean-Pierre told reporters that the administration remains focused on the issues at hand despite the latest survey, which showed only 33% of respondents approve of the job Biden is doing and 64% of Democratic voters saying they want someone else to be the party nominee in the next presidential election.

“Not to get into politics from here or get into any political analysis, [but] this is not something — there’s going to be many polls. They’re going to go up, they’re going to go down, this is not the thing that we are solely focused on,” Jean-Pierre said at Monday’s press briefing before noting Biden’s celebration of a bipartisan anti-gun violence package earlier in the day.

“We are focused on things like today, signing this bipartisan gun reform legislation, which will, again, save lives. Do we have more work to do? Absolutely. I was talking about inflation and how … that is a priority for this president, how we have seen gas prices go down by close to 30 cents per gallon the past 25-plus days,” Jean-Pierre said. “That is something that the president is going to continue to work on because we still need to give Americans relief.”

The press secretary rattled off other priorities, like maintaining job growth and pushing a bill to increase competitiveness with China, insisting that Biden will remain locked on those issues in spite of any poor polling — which, administration supporters were also quick to note, did show him winning a hypothetical rematch with Donald Trump.

“We’re not gonna pay attention to polls, it’s not what we’re going to do here. But [what] we’re going to focus on is delivering for the American people,” Jean-Pierre said.

“There is so much work to be done that the president is going to focus on and deliver as well,” she said. 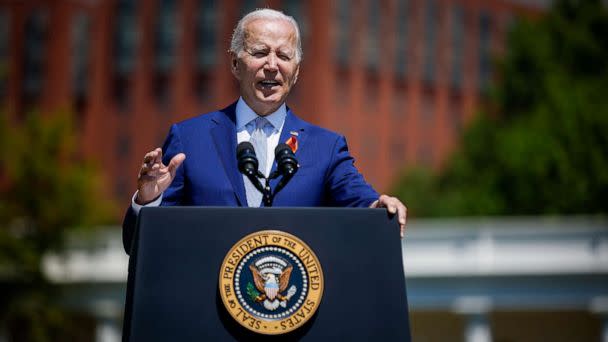 Still, Jean-Pierre recognized the widespread dissatisfaction exemplified in the poll, with more than 75% of respondents saying America was headed in the wrong direction — though, given the country’s polarization, it is surely for varying and contradictory reasons.

MORE: No reason US ‘will have a serious recession’ but economy should cool, Gina Raimondo says

The latest poll comes amid a spate of poor surveys for Biden, whose approval rating has sunk under the pressure of stubbornly high inflation, the expensive cost of gasoline and more even as the administration has touted what it says is a little-credited economic recovery, with robust employment, and other legislative breakthroughs including on guns and infrastructure.

The Times/Sienna polling — as well as the fact that Biden, at 79 years old, is already the country’s oldest-ever president — has refueled concerns from some Democrats over his viability to win reelection in two years. 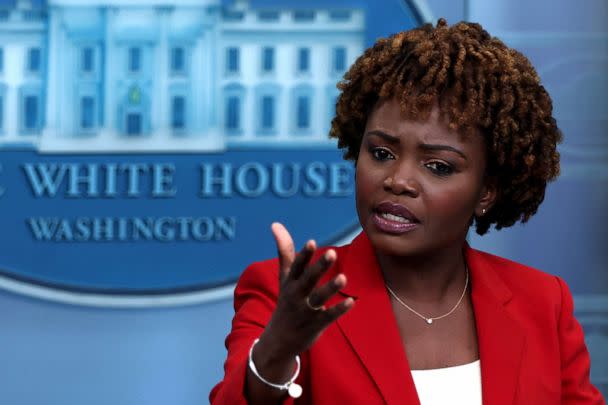 But as the Times poll also showed, Biden narrowly comes out on top — 44 to 41 — in the expected matchup with former President Trump.

In a further sign that defeating Trump would be a top priority for Democratic voters, over any particular policy, 92% of Democrats in the poll said they would stick with Biden in such a contest.