Anti-government protests in Iran over the death of a 22-year-old woman in police custody are intensifying, and dozens of cities are embroiled in unrest that has been met with a crackdown by authorities, according to witnesses, videos posted on social media and human rights groups.

The protests appear to be one of the largest displays of defiance of the Islamic Republic’s rule in years and come as President Ebrahim Raisi is in New York for the UN General Assembly. They erupted last weekend after the woman, Mahsa Amini, died after her arrest by Tehran’s morality police on an accusation of violating the law on headscarves. 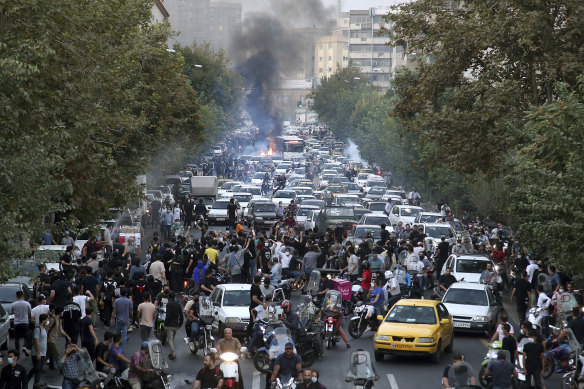 Protests in downtown Tehran on Wednesday.Credit:AP

At least seven protesters had been killed as of Wednesday, according to human rights groups. Protesters have been calling for an end to the Islamic Republic, chanting things like “Mullahs get lost,” “We don’t want an Islamic republic” and “Death to the supreme leader.” Women have also burnt hijabs in protest against the law, which requires all women above the age of puberty to wear a head covering and loose clothing.

Raisi’s government has unleashed a massive deployment of security forces, including riot police officers and the plainclothes Basij militia, to crack down on the protesters. Internet and cell service has been disrupted in neighbourhoods where there were protests. Access to Instagram, which has been widely used by the protesters, was also restricted.

“For security reasons, the relevant authorities may impose certain restrictions on internet speed,” Iran’s minister for information and communications technology, Issa Zarepour, said in a statement. 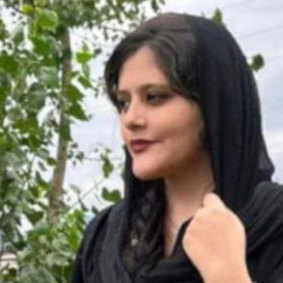 The videos posted online and the scale of the response from authorities are difficult to independently verify, but video and photographs sent by witnesses known to The New York Times were broadly in line with the images being posted widely online, showing protesters, many of them women, facing off against police and fires on the streets of Tehran.

Police shoved protesters to the ground, beating them with batons and firing shots and tear gas in their direction, according to witnesses and some of those videos.

Amini’s death has garnered international attention and turned her into a symbol of Iran’s restrictive and violent treatment of women and its repressive policing of opposition.

Iranian authorities say that Amini died from a heart attack and have denied accusations that she suffered blows to the head while being taken to a detention facility. Her family, which has not responded to requests for comment, has told news outlets that she was healthy at the time of the arrest.

The protests that have swept the country are one of the most daring displays of defiance of the government’s religious and social restrictions in years, according to analysts and rights experts.

“The anger on the streets is palpable,” said Jasmin Ramsey, director of communications at the Centre for Human Rights in Iran, a New York-based non-profit organisation, adding that the protests were a “culmination of the past five years where all facets of society — labourers, teachers, retirees, university students and average people everywhere — have been trying to call for an end to the crisis of impunity in Iran despite violent state repression.”

The demonstrations have largely been spontaneous and leaderless, she said, and had probably been inflamed by the photos and videos circulating across social media showing extraordinary scenes across the country, including women risking arrest by symbolically removing and burning their hijabs in public. Many have rallied on social media with hashtags in Persian referring to the death of Amini.

In the city of Kerman, in the south-east, one video showed a woman cutting her hair while sitting on a utility box in front of a roaring crowd. In the south, in the city of Shiraz, another showed an older woman shouting at a security officer, “If you think you are a man, come and kill me.” And one showed university students gathering on campuses in Tehran chanting “Killings after killings, to hell with morality police!”

“These are all acts that are punishable by law,” Ramsey said in a phone interview, referring to the videos. “They’re showing a serious challenge to the Islamic Republic in their chants and the amount of people that are in the streets,” she added.

Hundreds of protesters took to the streets of Tehran late on Tuesday, setting fire to tires and shouting “Death to the dictator,” and “Life, liberty and women,” according to a witness.

Tehran’s governor, Mohsen Mansouri, said on Wednesday that foreign agents had hijacked the demonstrations and were fuelling violence in the streets.

Witnesses said it was clear that the protests were getting broad support from people with a long litany of grievances after struggling under oppressive rules and economic hardship.

Some Iranian protesters lashed back at security forces, chasing them down the street with rocks. In Isfahan and Tehran, protesters set fire to police cars and motorcycles, and in Kerman they encircled a police officer and beat and kicked him to the ground, videos showed.

At least seven people have been killed in cities in Kurdistan, Amini’s home province in the northwest of the country, according to Hengaw, a human rights group, which posted names and photos of victims online. 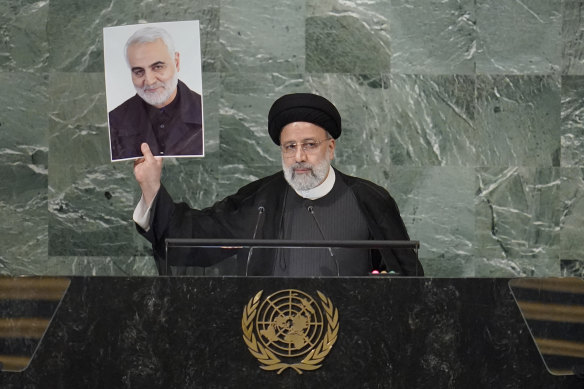 They were killed by “direct fire by Iranian security forces,” the group said in a statement posted to its website. At least 450 people had been injured and at least 500 were arrested in protests in cities across the Kurdish province, the group said.

The Iranian media reported that Raisi, spoke at the UN General Assembly in New York on Wednesday, told Amini’s family Sunday that he had ordered an investigation into her death.

“Your daughter is like my own daughter, and I feel that this incident happened to one of my loved ones,” he said.

The protests were not addressed by Iran’s supreme leader, Ayatollah Ali Khamenei, who gave a speech at an event on Wednesday commemorating veterans of the Iran-Iraq war. In an effort to curb the backlash, a representative of the supreme leader visited Amini’s family home, according to the state media.

“All institutions will take action to defend the rights that were violated,” the adviser, Abdolreza Pourzahabi, said in the state media. “As I promised to the family of Ms Amini, I will also follow up the issue of her death until the final result.”